The PM finally addressed the ongoing crisis in his government, repeatedly and without apology pressing the issue of potential job losses. Read his full statement. 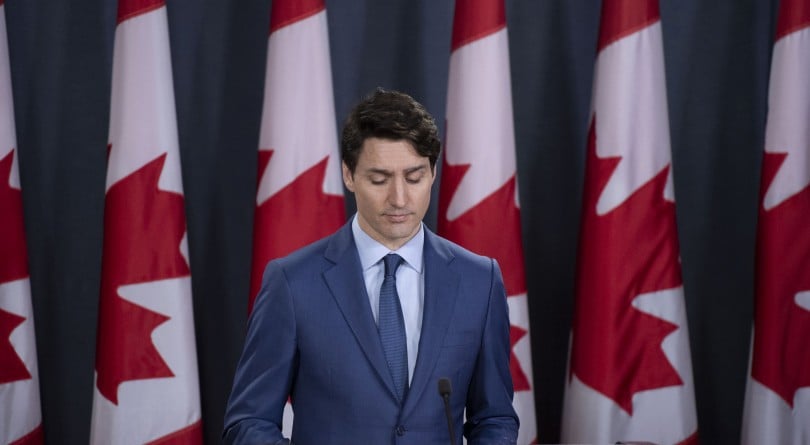 Weeks after his government was thrown into turmoil with accusations of political interference in the ongoing criminal case against SNC-Lavalin, and the subsequent resignation of two key cabinet ministers, Jody Wilson-Raybould and Jane Philpott, the Prime Minister finally addressed the crisis at length. In his 12 minute address in Ottawa on Thursday morning, he repeatedly stressed the government’s concerns about the potential loss of 9,000 jobs at SNC-Lavalin if it was not offered a remediation agreement to avoid being prosecuted for fraud. He noted that he did not realize that there had been an “erosion of trust” between his office and then-attorney general Wilson-Raybould.  But the PM offered no apologies over accusations that he, his staff and the public service repeatedly pressured the attorney general over her refusal to order the negotiation of a remediation agreement. Here is the Prime Minister’s full statement:

Good morning everyone, thank you for joining us at this early morning press conference. As you know I have to be in Iqaluit in a few hours. I know you’ve all been wanting to hear from me directly on the SNC-Lavalin issue. I have taken time to review the testimony, to reflect on what has happened over the past months, and on what our next steps should be.

(in French, translation) I would like to give you an update, based on what I have heard in the testimony. As you know, I met with Jody Wilson-Raybould and the clerk of the Privy Council on September 17th. During these meetings, I raised the SNC-Lavalin file. And as you heard, I reaffirmed that a decision was up to the AG to make. Yes, I did mention that I was the member for Papineau and I had the great honour to represent Papineau and I have done this for more than 10 years. I care about the families, workers and students in my riding. But this comment wasn’t partisan in nature.

It is our job as parliamentarians to defend the interests of the communities we were elected to represent. To be the voice of those communities in Ottawa. I stressed the importance of protecting Canadian jobs and re-iterated that this issue was one of significant national importance. Ms. Wilson-Raybould left that meeting, saying that she would speak with her Deputy Minister and the Clerk about this matter but that the decision was hers alone.

In the months that followed that meeting, I asked my staff to follow up regarding Ms. Wilson-Raybould’s final decision. I realize now that in addition, I should have done so personally, given the importance of this issue and the jobs that were on the line. In recent days I have reviewed the testimony from the Justice Committee, including that given by Ms. Wilson-Raybould, Gerald Butts, the clerk of the Privy Council and the deputy minister of Justice and deputy attorney general, recalling various interactions.

Each of these interactions was a conversation among colleagues about how to tackle a challenging issue. Each came at a time when my staff and I believed that the former Minister of Justice and attorney general was open to considering other aspects of the public interest. However, I now understand that she saw it differently.

What has become clear through the various testimonies is that over the past months there was an erosion of trust between my office, and specifically my former principal secretary and the former Minister of Justice and attorney general. I was not aware of that erosion of trust. As Prime Minister and leader of the federal ministry, I should have been.

(in French, translation) After several witnesses appeared it has become clear over the past few months that confidence has eroded between my office, my former principal secretary and the former AG. I was not aware of this erosion of trust and as Prime Minister and head of the cabinet, I should have been aware of it.

Many people have been sharing their advice, perspectives and experience with me over these past weeks. What is clear is that there are many different styles of and approaches to leadership. There’s one theory that the most effective leaders are adversarial and almost tough to a fault. That’s not what I believe.

I believe that real leadership is about listening, learning and compassion. It’s about the push and pull of robust discourse and honest debate. It’s about transparency and accountability. One of the things central to my leadership is fostering an environment where my ministers, caucus and staff feel comfortable coming to me when they have concerns.

Indeed, I expect them to do so. In Ms. Wilson-Raybould’s case, she did not come to me, and I wish she had. Because, if it’s a real relationship and we truly are a team, we can always acknowledge when we need to make adjustments. Things won’t always be perfect, but there should remain a constant level of openness and dialogue. And that dialogue is crucial on a file as important as justice.

I’m not going to surprise anyone when I say my father and me had different leadership styles. But I can also tell you that the files that were closest to his heart are also for me. And one is the justice file. I was immensely pleased to discover that the new Prime Minister’s Office in the West Block is an office that was occupied by my father when he was minister of justice. And throughout his career he was dedicated to that principle of justice—the just society, the Charter of Rights and Freedoms—and his approach of justice and fairness infused everything he did and certainly was something that he raised me with.

So, as I look at the different departments and responsibilities and things that a government must do, the justice file has always been one of particular importance and interest to me. It’s always been very close to my heart and the work we have done over the past few years on justice has been very important to me: the reconciliation files, the medically assisted dying file, the cannabis and pardon files—these principles of justice are fundamental for me, in terms of who we are as a country and who we want to be as a society.

I’ve spent my entire political career fighting for justice, and for people. Social justice. Protecting Canadian jobs. Since I started politics, I’ve always worked to the best of my abilities to represent people faithfully. The SNC-Lavalin file was no exception to this rule.

SNC-Lavalin is a company that employs 9,000 Canadians across this country. They create many thousands of spinoff jobs and peripheral industries. They directly or indirectly put food on the table for countless families as one of Canada’s major employers. They are also a company facing serious criminal charges.

The context is a tough one, with potential job losses in the thousands. These are the types of situations that make governing a challenge. And when there’s an erosion of trust within the people involved, it further complicates what is already a difficult decision for the attorney general.

This has been a tough few weeks. Canadians expect and deserve to have faith in their institutions and the people who act within them. Almost every day as Prime Minister I learn new things. So I can tell you without a doubt that I have taken and will continue to take many lessons from these recent days and weeks.

We will be seeking external expert opinions on a number of things as they relate to the set of issues raised over the past few weeks. This includes the dual role of the minister of justice and the attorney general as well as the operating policies and practices across cabinet, the public service and political staff as they relate specifically to judicial matters but also more general.

Ultimately, I believe our government will be stronger for having wrestled with these issues.

This morning I’m headed north to Iqaluit to deliver an official apology for the federal government’s management of tuberculosis in the north in the 1940s to 1960s and the harms this created in Inuit communities. This is an important day and this apology will be another defining moment along the road to reconciliation.

Our government has said from the very beginning that there is no relationship more important to us than the one we share with Indigenous peoples. That remains true and we will work hard to advance reconciliation each and every day.

On Friday I’ll be in Toronto marking International Women’s Day with incredible young leaders. I plan to listen and learn from their lived experiences as we talk about how we can work together to deliver true gender equality in this country and around the world.

(in French, translation) And next week and the other weeks that will follow my government and the Liberal team will focus on the mission that Canadians electors gave us, building a strong economy, attracting better jobs and creating better opportunities for middle class Canadians. After all, we are here for that.

Thank for being with us this morning.