The PM stuck to familiar notes during his appearance at the Women in the World Summit, but it was music to the ears of his audience 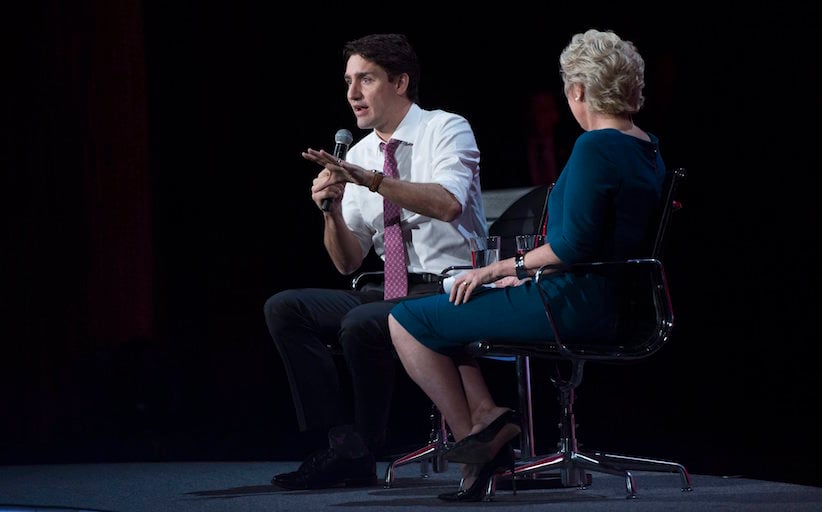 Yesterday, Justin Trudeau surprised the House of Commons when he actually answered questions, thus generating headlines. Today the prime minister flew to New York City where he exhibited a similar ability to garner praise, even gush, for his ability to bob and weave. The setting was the three-day Women in the World Summit, a glossy, corporate-branded feminist lollapalooza organized by journalist Tina Brown, former editor-in-chief of The New Yorker and Vanity Fair, and held at Lincoln Center.

Trudeau’s name drew cheers when Brown announced the line-up this morning. But biggest hurrahs were reserved for Samantha Bee and Hillary Clinton, who’s conducting her first sit-down interview since the election at the end of the day.

Brown’s 20-minute interview with Trudeau, who was sans jacket, his shirt-sleeves rolled up, was prefaced by a video of his greatest progressive hits—him, post-election, offering reassurance that Canada’s “compassionate and constructive voice” had returned: “Well, I have a simple message for you on behalf of 35 million Canadians. We’re back.” Headlines announcing “Trudeau makes Canada hip” flashed across the screen, along with photos of him greeting Syrian refugees, shots of him dancing, and footage of him declaring himself to be a feminist. A photo of him with his gender-balanced cabinet photo received whoops from the crowd. There was also a clip of his famous “Because it’s 2015” line, but it didn’t make sense to anyone who didn’t know he was explaining why he selected a 50-50 cabinet.

Brown, a seasoned and acerbic interviewer, worked nimbly within a context that called for positive, inspiring messaging: “How does it feel to be cast as the world’s big new superhero?” was her first question. An animated Trudeau answered by talking of  the importance of  “listening.” Such deflection became a pattern, but the crowd, eager to hear a politician support women, didn’t notice or mind. Trudeau highlighted the accomplishments and sound-bytes destined to resonate with a mostly white, mostly female, small-l liberal crowd. He drew cheers for welcoming refugees and denouncing the Syrian government’s use of chemical weapons. He got a big hand when he spoke of including a gender-based analysis chapter in his recent federal budget. He boasted that his “Ask her to run” campaign paved way for a gender-based cabinet. The crowd cheered. It also loved Trudeau’s much repeated distinction between men and women. “When you ask a man to run, they say, ‘When do I start?’ Women ask ‘Why me? Am I good enough.'”

Throughout, Brown got in a few digs, some subtle. She noted his falling approval ratings, referring to “less of a honeymoon.” Trudeau put a happy face on it. “People are realistic and you can’t fix things with a Band-Aid,” he said. “You need incremental change.”

Brown walked a careful line between journalist and welcoming host. “People see you as an elite wonder boy, and you behaved like it when you walked in,” she began one question, before throwing a softball about his mother’s influence. The PM reprised his winning line about often being dismissed as his “mother’s son.” “I’d say ‘Yes!,’ I’m so proud of that,” noting his mother’s advocacy to raise awareness of mental illness.

Today’s New York Times article about rising Islamist feeling in Quebec gave Brown an opportunity to ask whether the shadow of rising populism was a worry. Trudeau acknowledged worldwide fear and anxiety, but turned it to lack of opportunities facing the next generation, then again to the need for more women in leadership positions so we can “overcome fear together.”

Brown  tried, and failed, to get Trudeau to say something about Donald Trump. She alluded to his father’s famous line about Canada lying next to a “sleeping elephant,” noting the elephant was now on “a rampage,” before asking what it was like for him to recalibrate expectations from a Hillary Clinton administration to a Trump administration. Trudeau deflected, saying he hadn’t taken any outcome for granted. Brown tried again, speaking of Trudeau’s “a good bond” with Ivanka Trump. “Do you see her representing a more sympathetic strand?,” she asked. Trudeau answered by noting that “Canadian-U.S. relationship is “way bigger than PM-to-president” before somehow ending up taking about the importance of “smooth flow of goods and services across borders.” Ivanka wasn’t mentioned.

Brown asked a good question: why two countries so close could have evolved so differently, referring to Canada’s universal health care, maternity leave and gun control. Trudeau began with uncharacteristic negativity. “I tell people around the world, Canada is not a magical place, some sort of unicorn,” he said, to laughter. What he was referring to, it turned out, was divisive Conservative postures during the election—snitch lines and attack ads. Trudeau offered no insight about the cultural divide. “We have been able to pull together because we do succeed together,” he said, before suggesting it had something to do with Canadian winters, or distances between communities. “The important thing is it didn’t happen by accident,” he said. “And it will only continue with choices not to take the easy way out.” He alluded to his famous “Because it’s 2015” comment: “Before it could be 2015, it was 2013, then 2012,” he said, explaining that those were the years he convinced women to enter politics in a divisive time.

Chrystia Freeland was name-checked by Trudeau, several times. He bragged about the challenge of recruiting her from an executive job at Thomson Reuters in New York to take a big pay cut and move to Ottawa. “Oh, I think you’re quite persuasive,” Brown murmured.

The interview was interrupted for a clip of Trudeau’s victorious 2012 boxing match with Senator Patrick Brazeau. It was a huge risk, Brown said. “What if you lost?” The implication was clear: she wouldn’t be interviewing him. Trudeau ignored the bait, instead winning applause for noting the match raised a quarter of million dollars for cancer research.

Brown then quoted a Frank Bruni’s recent New York Times column about the “man box,” meaning a fake idea of masculinity, before asking Trudeau how, as a  parent and partner, one could avoid that. The question gave him a chance to charm a new crowd with his story of his wife, Sophie, who “is there to challenge and inspire me.” He credited her with  insisting he talk to his sons, as well as his daughter, about feminism. “Men have to be part of the solution,” he said. The audience cheered.

Brown ended with a sure-fire applause generator: Trudeau’s announcement that the government would earmark $650-million to fund global reproductive health initiatives, shortly after Trump reinstated and expanded the global gag rule that ends U.S. funding for NGOs that mention abortion when discussing women’s reproductive health. “It isn’t just to provide reproductive health, it’s providing reproductive rights,” Trudeau explained. “It’s a question of rights. It’s her choice.” The crowd exploded. After, the woman next to me, a 26-year-old energy engineer who lives in New York City, was in thrall. “He’s amazing,” she said . “He gives me hope.” Against the backdrop of an event focused on how equality can only be achieved if men are equal participants yet only four panel participants are male, one can’t disagree.