Justin Trudeau takes questions—all of them

Paul Wells on Trudeau's efforts at political theatre, which aimed to highlight the merits of a weekly PM's Questions session 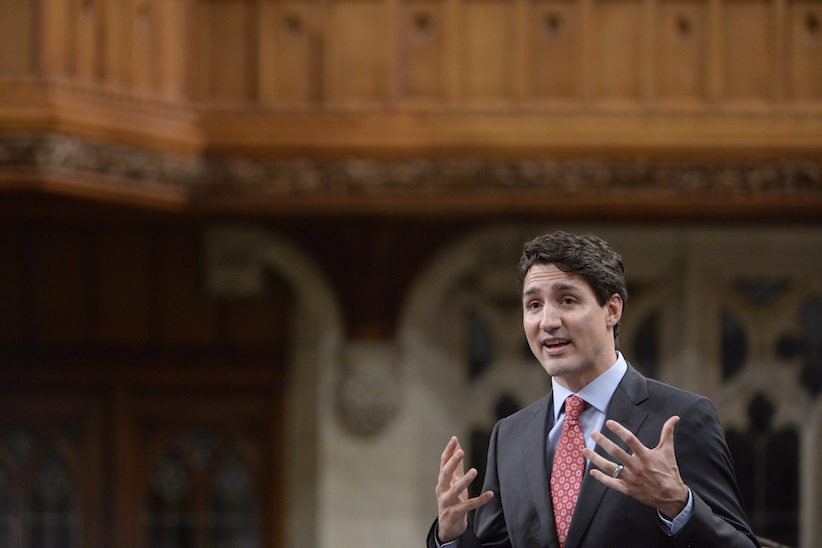 Good for the prime minister for taking questions from every MP who had one in Question Period on Wednesday. He has proposed a single weekly PM’s Questions during which he’d be the only person to take questions from the Opposition. It’s modelled on the way the Brits do it. The opposition understands the unspoken rest of the offer, which is that the PM would feel free to skip the rest of the week’s Question Periods if he liked. They’re pretty sure they don’t like it.

Rather than argue the point, Justin Trudeau decided to play Show Me, Don’t Tell Me. He took every question (except one the increasingly frustrated NDP finally put to one of their own, Daniel Blaikie, because he’s vice-chair of a Commons committee and so is empowered to take questions if anyone thinks to ask him one). Because Trudeau is fond of the element of surprise, nobody knew this little display of derring-do was coming. (I sure didn’t; I’m piecing this all together from the day’s rush transcript, known as the Blues, because I wasn’t watching as it happened.) The effect was like the legendary day in 1962 when Duke Ellington took his band into the studio and kept calling the same soloist, tenor saxophonist Paul Gonsalves, on tune after tune. OK, it wasn’t much like that, but I just love that story. Even Gonsalves didn’t know he’d be the star that day. It’s such a great album.

MORE: Canada’s House of Commons doesn’t need to be modernized

Anyway. It took several minutes before anyone twigged to what Trudeau was up to. By the time he was done, he’d taken questions on an impressive array of topics. A partial list:

• Chemical attacks against civilians in Syria

• And what have we: access-to-information reform, Manitoba floods, the sputtering Phoenix pay system, the 100th anniversary of the Battle of Vimy Ridge (a lob from the Liberal benches, natch), autism, and environmental assessment.

I ran into a Liberal staffer afterward who was chuffed at the breadth of topics the boss had fielded. Who’s “Just Not Ready” now, huh? Huh? And Trudeau was careful to keep his sunny you-know-whats in full view, thanking opposition MPs for even the grumpiest questions and proclaiming, ad nauseam, his eagerness to work with them in solving the nation’s vexing challenges.

None of this is to say he was like the computer in Star Trek, magically spitting out precise replies to any question. Much of the time his answers amounted to wheel-spinning.

Why does he seem intent on pushing through his own plan for changes to parliamentary rules, rather than collaborating on something more consensual? “I’m very eager to work with them precisely to ensure this place better serves Canadians throughout the country,” he said in French, “while better serving our citizens and our fellow citizens.”

John Ivison, in the National Post, has written memorably that to be on the receiving end of this mode of discourse “is like being flogged with warm lettuce.” At times Trudeau’s treatment verged on self-flagellation. Why is Stelco being allowed to cut health benefits while racking up tidy profits in Hamilton? “The issue of steel is one that has come up many times,” the PM said gamely, in the manner of a student padding an essay question.

At another point he was asked about Jennifer Stebbing, a failed Liberal candidate who found herself on the Hamilton Port Authority. Trudeau, perhaps alone in the room, thought this was an excellent moment to congratulate himself on his government’s “merit-based system” for appointments, one that’s “particularly necessary after too long of successive governments choosing favouritism over objective qualities.”

Oh my. Another MP tried again. The port authority job listing called for candidates with “extensive experience related to the operation of a port.” Stebbing is an estate planner; her firm’s website says she specializes in “ensuring her clients’ wishes are respected after they pass away.”

To borrow a term from francophone political reporters, Trudeau decided to play another cassette. “We have had extraordinary diversity,” he said of his objective-quality-based appointment system. “We have had tremendous Indigenous appointments across this country.” Stebbing’s is, uh, not among them.

At yet another point, I believe I heard the prime minister break some news. He was being nagged about the transit tax credit, which the Conservatives introduced and he has axed. He said it wasn’t working, and he’d rather spend money on building public transit “whether it’s the REM”—the ambitious light-rail system that the Caisse de dépôt wants to build around Montreal—”or the SRB in Quebec City,” a rapid bus service between Quebec and nearby Lévis. Officially, the feds haven’t decided to support either project.

It’s perhaps unsurprising that Trudeau’s clearest answer is one I don’t think he meant to give. He’s from the “Thanks for your question, here’s my line” school of parliamentarians. He could actually save himself some effort and his opponents a few blown gaskets by answering the odd question directly and simply. Both Jean Chrétien and Stephen Harper, champion obfuscators when they needed to be, could sometimes serve up a straight answer. Chrétien was fond of a one-word “Yes” or “No” when it suited. Both weren’t shy about saying they would never do what their opponents suggested — or that they already had. To do that, you need to hear a question as a question, not as a cue to deliver the next prepped homily.

More broadly, I wish we could discuss the reasons why a weekly PM’s questions works for the Brits and may help here. One is that the goal is to reduce the ridiculously inflated significance that politicians, their staffs and journalists attach to Question Period, squatting as it does across the middle of the workday like a bloated and lazy procedural toad, sucking up energy, giving so little in return. Another is that if there’s one day for the PM, there could be designated other days for teams of other ministers with related files, again as there is in Britain: Economic Ministers’ Questions on Tuesday, Social Ministers on Wednesday, or whatever. This would reduce buck-passing, in theory.

But you see what I did there? I proposed some ideas, defended them, and now I’m awaiting responses. That’s what a conversation looks like. Twice on Wednesday, Trudeau was asked to reassure MPs that what he wants is a conversation, rather than an expedited list of Liberal-approved reforms despite any objections from united opposition parties. Twice he refused to give that reassurance. When a man spends an hour talking, the silences can be as eloquent as the noise.