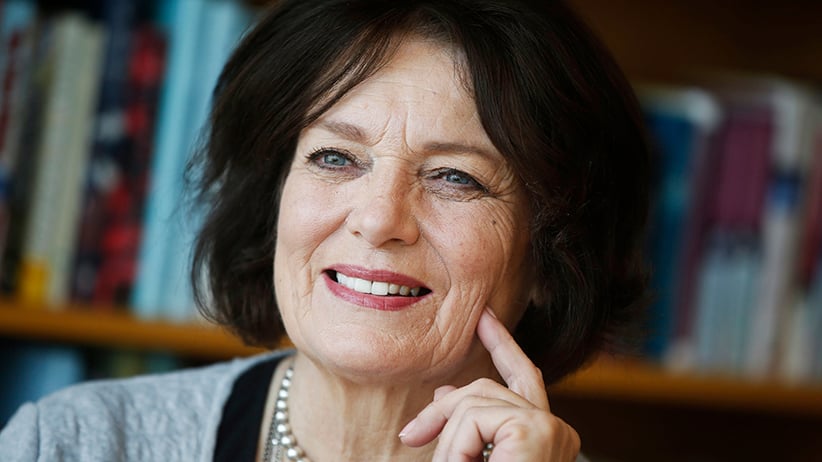 Anyone who popped into Liberal MP Chrystia Freeland’s campaign headquarters in downtown Toronto on Wednesday afternoon would have been in for a surprise. Circled by 40-odd volunteers stood Margaret Trudeau, mother of Justin, charming the group with a speech that spanned her recovery from mental illness, affectionate references to her firstborn, and barbs directed at Stephen Harper and his government. She spoke with emotion of her “wonderful” son and his “tender heart”: “I am so proud of Justin. And I know Pierre would have been so proud, too.” She was equally impassioned about Harper—how his government was “ripping” Canada’s social fabric and destroying health care. Conservative ads attacking her son were a form of bullying, Margaret said, before joking: “But who do you complain to? The government? The Governor General?”

Trudeau, who criss-crosses the country on the speakers’ circuit recounting her journey to wellness, held the crowd in thrall. Whether her hour-long appearance signals greater deployment in her son’s campaign is unclear. She was there as part of “volunteer appreciation,” says Freeland campaign manager Dana O’Born, who says they got a call from the “central campaign.” Freeland, in a tight race with NDP candidate Jennifer Hollett in the newly drawn riding of University–Rosedale, is close to Justin Trudeau; he gave his benediction for her to run in a 2013 by-election and she is in his economic caucus. (Maclean’s interview requests to Freeland and the Liberal campaign went unanswered.)

The Margaret sighting offered a jarring maternal reminder in a campaign that has defined Justin Trudeau in father-son dynamics—as the son of a famous father who was Canada’s paterfamilias of sorts for more than a decade, as well as a proud father himself. (He did tweet out his love to his mother earlier this month, on her birthday.) Margaret Trudeau herself joked on Wednesday that her presence could be misconstrued, O’Born said. “She said she doesn’t want everyone to think that Justin needs his mommy.”

Whatever the motive behind the stealth appearance, it’s a reminder of a demographic not being addressed in the campaign—or even in the “women’s issues” that are not being discussed in the campaign: older single women. And this is a group disproportionately affected by poverty due to systemic gender inequities. Even the twice-divorced Margaret Trudeau, a vibrant 66, alluded to financial vulnerability while on tour earlier this year for her latest book, The Time of Your Life: Choosing a Vibrant Joyful Future, a how-to about making the most of later years. In a Global TV interview, she admitted money was a concern and that she would have told her younger self to save more.

Thirty years ago, in the 1984 leaders debate on women’s issues, politicians did address older women living in poverty; the issue remains disturbingly timely today. The Status of Women document leaked earlier this year found “elderly unattached women experience low income more prevalently than elderly unattached men” and that the percentage of elderly low-income women had risen “substantially” from 15 per cent to 16.1 between 2009 and 2011.

The current election campaign has included bids to appeal to voters over age 65. For one, the Conservatives promised a $2,000 “equivalent-to-spouse” pension income credit for single and widowed seniors. The Liberals and NDP are talking about implementing a national drug program that would benefit older Canadians.

Yet poverty isn’t being discussed, says Kate McInturff, a senior researcher at the Canadian Centre for Policy Alternatives who specializes in gender inequity and public policy. The absence of any discussion about poverty in the recent debate on the economy was “mind-boggling,” she says. Older women live in poverty more than older men for myriad reasons, says McInturff—they live longer; they have lower lifetime earnings, with the generation over 65 now being far less likely to have worked full-time; women who worked full-time their entire lives are paid less because of the wage gap; women’s earning power peaks in the early 50s versus late 50s to early 60s for men.

The fact the rate of women over 65 in the workforce is rising more quickly than men is another indicator of the inadequacy of their incomes, says McInturff. Having children can profoundly diminish earning potential, she notes: “Taking a year off [for maternity leave] off doesn’t subtract a year of earnings, it causes a persistent decline in earnings over time after whatever duration of parental leave they take.” So does the fact women are more likely to work part-time: “They have less money to put away, less access to workplace pensions, less access to savings set up for full-time earners, which makes them more vulnerable to falling below the poverty line in retirement.”

Employment-related issues that create inequities have been ignored in the election, McInturff says: “Everyone is so fixated on jobs and the middle class they’re not thinking about what’s happening after age 65.” Both the NDP and Liberals addressed better access to Employment Insurance in the Up for Debate interviews, she says: “That will have a positive impact on women and reduce the entry level for women who work fewer hours, do more part-time work, and have a much harder time accessing EI.”

Women are also disproportionately affected by changing eligibility for Old Age Security, announced in the 2012 budget from 65 to 67 over six years, starting in April 2023, a fact discussed in the 2015 study “Uncovering women in taxation” by Kathleen Lahey, a professor in the faculty of law at Queen’s University. “Because of lifelong gendered income differentials, women will have to save larger portions of their earnings during their paid work years to replace the cancelled OAS amounts than men—thus it’s a hidden tax on women that men do not have to pay,” Lahey tells Maclean’s. She also sees another problem: “This age 65/66 cancellation is also cancelling the Guaranteed Income Supplement, which is an income safety net for women who have no other significant sources of income,” she says. “More women at those ages face involuntary retirement than men, due to higher rates of workplace discrimination and heavier unpaid care workloads.” McInturff says getting an OAS cheque in their name for the first time has even allowed some women to leave abusive marriages.

While poverty in old age exists as a barometer of social inequity, few people want to look at or discuss the elderly, says women’s rights advocate Julie Lalonde, whose 2013 master’s degree thesis at Carlton University was a qualitative analysis of elderly women living in poverty. “I did four years of Canadian women’s studies and not once did we talk about elderly women, which was bizarre,” she says. Yet aging is a deeply gendered experience, she says: “Women lose value as they age; they become invisible, whereas men gain wisdom or stay the same.”

Poor women are the most invisible of all, says Lalonde, who reports that most of the women she spoke to agreed to be interviewed because she told them she would give them a transcript: “Their life would be documented,” she says. “It would have mattered for something.”

But older women also comprise a powerful voter demographic, as Margaret Trudeau noted in a CTV interview this spring: “I’m no political pundit,” she said, “but don’t you think this demographic, these women, have quite a bit of political clout? If we all got out and voted, we could change the government.” On Wednesday, she was clearly trying to just that. Let’s see if there’s more to come before people go to the polls.