'Justin, we're not here to talk about your socks'

Image of the Week: Back in 2017, the Canadian and Aussie PMs seemed sympatico. But in a new book, Malcolm Turnbull says he found Trudeau to be flaky and preoccupied by appearance. 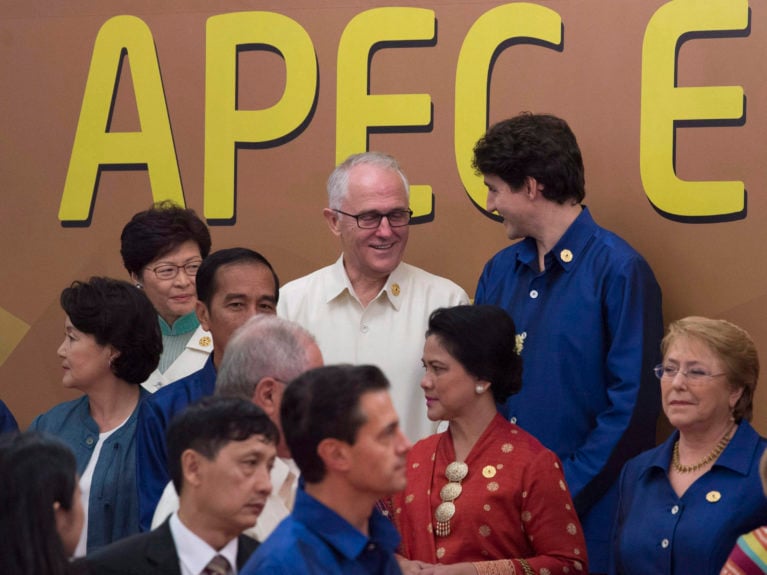 Turnbull, top row centre, kept up appearances with Trudeau as they took their places for the leaders' photograph at the APEC Summit in Danang, Vietnam in November 2017. (Adrian Wyld/CP)

A Bigger Picture, the new autobiography by former Australian prime minister Malcolm Turbull, is clouded in scandal. Days before its release on Monday, someone leaked dozens of digital copies to politicians and journalists across Australia. Since its publication, journalists in that country have called it, alternately, a “work of fiction” and “scandalously compelling.” Amid the many private conversations Turnbull unveils in the book, is one with Justin Trudeau, who Turnbull mercilessly portrays as self-centred and a poor negotiator who is inexplicably preoccupied with socks. “Justin always wore perfectly tailored suits that fitted like a glove, bright socks and on this occasion two-tone shoes,” Turnbull writes. “‘What do you think of the socks?’ he asked, crossing his legs as he sat down. ‘Justin,’ I said, ‘we’re not here to talk about your socks.'” According to the National Post, Turnbull describes Trudeau as singlehandedly derailing plans to revive the Trans-Pacific Partnership during high-level diplomatic meetings in Vietnam in November 2017. He writes that other world leaders, including the prime ministers of Vietnam and Japan, were humiliated, as they expected photo ops and handshakes and press conferences to seal the deal. In Trudeau’s defence, he has been fairly outspoken about his reservations since that conference in question—”I wasn’t going to be rushed into a deal that was not yet in the best interest of Canadians,” Trudeau told reporters at the time—and his primary concerns, including preserving Canadian cultural content and auto manufacturing, jive with Turnbull’s recollection of the disagreements. But what Trudeau did not disclose all those years ago was that the other Pacific countries were prepared to sign an agreement excluding Canada outright, so annoyed were they with Ottawa’s wrench-throwing attitude. Less than a week later, according to Turnbull, Trudeau announced Canada was officially in. The automotive clause didn’t budge, but Canada received binding side agreements with each member country protecting its right to “adopt or maintain discriminatory requirements” when it comes to preserving Can-con. So at least we got that.