The leader of the Liberal Party of Ontario announced her resignation: “Although I’ve lost this election tonight, I have not in any way lost my passion.”

Kathleen Wynne all but conceded the election over the weekend, but the full extent of voters’ dissatisfaction with her Liberal Party of Ontario became crystal clear today when the party was reduced to just a handful of seats in the provincial legislature, sweeping Doug Ford’s Progressive Conservatives to a firm majority. She addressed party supporters at the Liberals’ election-night headquarters in Toronto a short time ago. Here’s what she said:

I have been…I have been so fortunate to get to know so many of you and to see what you do. You are passionate about what you do and that is the beauty of Ontario. Some of you watching tonight are just finishing Iftar, you are in the midst of Ramadan and the days are long. Some of you have worked in your churches for decades, some of you volunteer at your gurdwara or temple, preparing food for thousands of people every week. Some of you volunteer at your synagogue every Saturday.

Some…some of our families have been in Ontario for six generations, some for six years and some for six months. But apart from First Nations, Metis and Inuit people, we all came from somewhere else to build a different kind of society. One where everyone would have a fair shot at a great life, education, health care, a good job. A life without fear of bigotry or discrimination. And we’ve got some of that right but we’re not there yet.

So, let me leave you with this: whoever you are, in whatever corner of Ontario you have made home, you are part of a beautiful, vibrant place. Election campaigns make us feel that we’re divided, that, somehow, we’re not in this together. But, believe me, we are. We are dependent on one another. From Fort Severn across to Moosonee, through Kenora, Thunder Bay, Wawa, Red Lake, Cochrane, Timmins, Renfrew, Cornwall, Ottawa, Kingston, the GTA, Barrie, Bracebridge, Kitchener-Waterloo, Niagara, London, Chatham, Windsor and all the places in between.

And just for all the speechwriters in the room, I know that list was too long but it’s my speech and, damn it, I was going to say all those places. 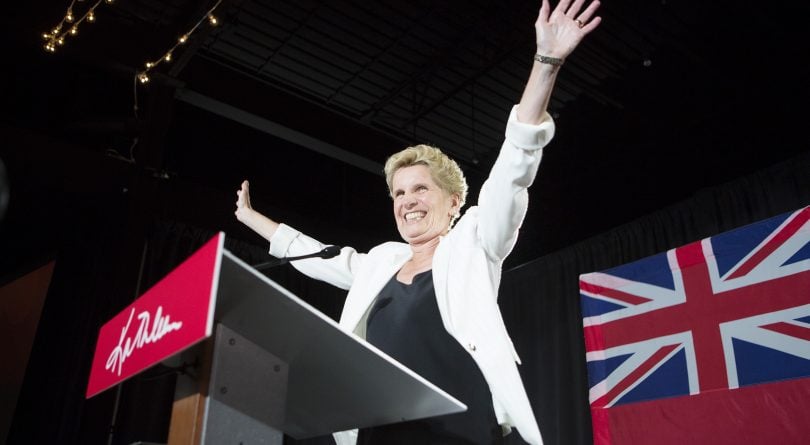 Just be lucky I didn’t name all 444 towns and cities and villages because each one is unique but it’s also striving for the same things: a great future for our community, opportunity for our kids, care for our parents, a decent living. That’s why we raised the minimum wage. That’s…that’s why we fought for…that’s why we fought for and won a better Canada Pension Plan across the country. That’s why we’re building roads and transit and water systems and schools and hospitals everywhere in this province. That’s why your child can get his or her tuition covered if it’s hard for you to pay and that’s why your baby’s prescription is free because we’re investing in his or her healthy start. And that’s why your kids…that’s why your kids can go to full day kindergarten and it’s why, if you’re in an abusive relationship, there are more supports in place for you.

That’s why there’s more care for your mum and dad who need it in their homes. Government exists to do the things that we can’t do ourselves and that job is never done.

It all starts in the community and I am so proud of all the Liberal MPPs who’ve been elected tonight. I’m absolutely certain that you will stand for your communities and you will fight to make sure every worker and every family in Ontario gets the care an opportunity that they deserve.

I am resigning as the leader of the Ontario Liberal Party. I know. We’re not…I’m not going to cry.

I have spoken to the party president and asked him to start the process of choosing an interim leader. And it is the right thing to do. There is another generation and I am passing the torch to that generation. 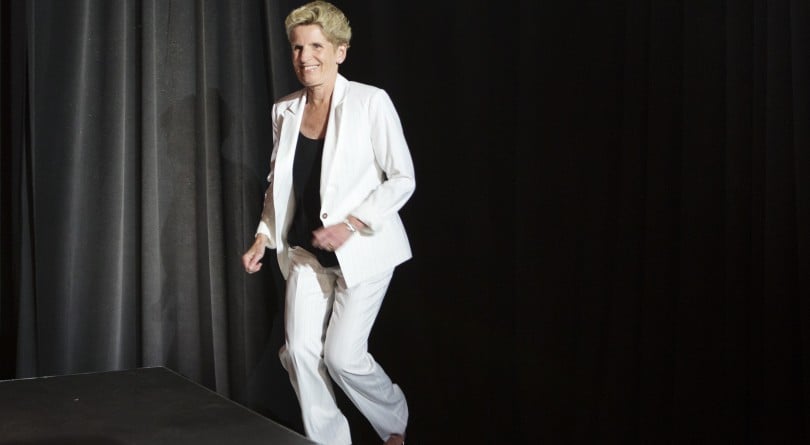 Liberal Leader Kathleen Wynne takes the stage to thank party supporters and announce that she is stepping down as leader of the Liberal Party at the Liberal Party election event in North York. (Photograph by Della Rollins)

I know…I know that tonight is not the result we were looking for and no one feels that more sharply than I do. But this is not a moment where any of us should linger…we can’t stay here. I hope that you can feel very proud of what we have done together in the past and absolutely determined to take on the task that lies ahead. We won’t get there with anger. We won’t get there with despair. So, although I’ve lost this election tonight, I have not in any way lost my passion for continuing this work. Continuing to find ways to make it all work better.

You know…life…you know…I…life is always complicated and I think we can look back at the past with rose-coloured glasses. My dad today when I took him, he and my mum, to vote, he was talking about how his mum talked so much about not having been able to vote until she was 30 or so and he says it’s just like yesterday he remembers that. So, there have been fights throughout our history. But, right now, climate change, technological change, Donald Trump, protectionism, populism make our world particularly complicated.

Our job, and I mean all of us, is to tackle those forces to make sure we assert our values as the people of Ontario: strong, resilient, caring people. We’ve got a great thing going here. It’s the best place in the world to live. People come from around the world, literally, to look at the excellence that we’ve built in our schools, health care, clean tech. So, let’s keep that momentum going. We all have a role to play, every single one of us.

And as the song says, and I’m going to paraphrase “We’re still standing” [laughs]