On Tuesday, Prime Minister Stephen Harper used a campaign news conference to answer a question nobody had asked about the Ontario government’s enhanced-pension scheme. On Thursday in her Toronto office, Ontario Premier Kathleen Wynne fired back. “We need a change in government at the federal level,” she told Maclean’s political editor Paul Wells. “I’ll be supporting Justin,” she said, referring to federal Liberal Leader Justin Trudeau. Her aides say joint campaign appearances are planned. This kind of direct participation by an Ontario premier in a federal campaign has no recent precedent, not even in the days when Mike Harris and Jean Chrétien viewed each other with disdain. Even as she insisted that “this isn’t a political fight,” Wynne laid out her plan to beat Harper in Ontario.

Q: How did you get into this fight with the Prime Minister?

A: I guess by saying that we were going to introduce an Ontario Retirement Pension Plan, when he decided that we weren’t, as a country, going to see an enhanced Canada Pension Plan, even though finance ministers across the country said that that was necessary. So this isn’t a political fight, from my perspective. This is a very fundamental difference in opinion about what’s needed in the country for people’s retirement security.

Q: In a news conference the other day, the Prime Minister called an enhanced Ontario pension a huge tax hike. Why would it not be accurate to call it a huge tax hike? 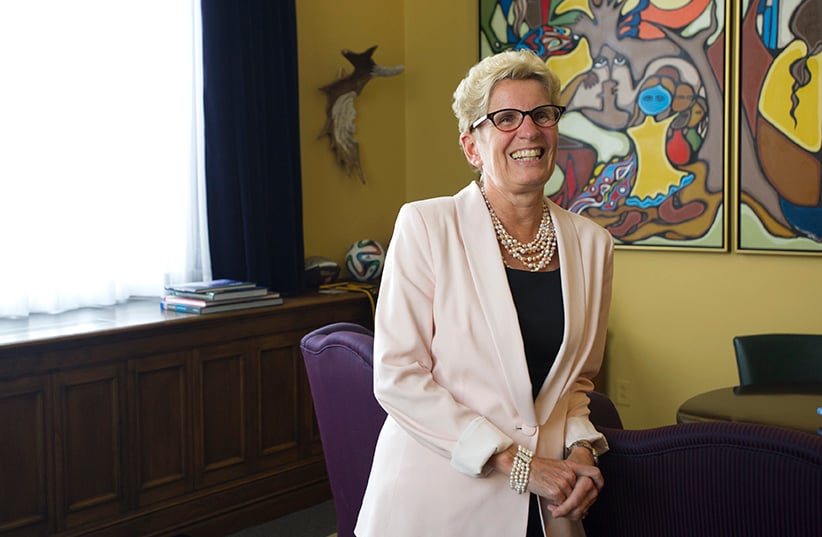 Q: Call it a tax, call it an investment; it will reduce the take-home pay in 2017-18 of people who have no choice whether or not to participate in the plan.

A: As I’ve said a number of times, the Canada Pension Plan is pretty much universally regarded as a good thing. People rely on it. They know it’s there, and there’s really no public debate about whether the Canada Pension Plan should exist. This is analogous to that kind of plan. You know, I ran on this. I ran, and we put it in our budget in 2014. We ran on it in our platform and were returned with a mandate in June of 2014.

A: We’ve had this disagreement for some time, and I believe that we need a change in government at the federal level. Yes, I have said that, and I believe that, because the example of the Ontario Retirement Pension Plan is only one example. There are other areas where this Prime Minister has decided he is not going to work with the premiers, doesn’t meet with us, doesn’t talk to us, doesn’t engage us as a group.

Q: What are the other items on that list?

A: Infrastructure investment. Climate change. He’s raised the issue of the Senate. Well, that needs to be a national discussion.  In the [Maclean’s Leaders Debate], he was asked point-blank if he would meet with the premiers to talk about the Senate, and he said no. Those are three examples. [Saskatchewan Premier] Brad Wall has raised the question of equalization. That’s a conversation that needs to happen with all of the premiers and the Prime Minister at the table.

Q: What are you going to do about it? Will you actively campaign? Will you be showing up with Justin Trudeau on the campaign trail?

A: Well, as Prime Minister Harper supported Tim Hudak in the last provincial election, and his MPs supported the Conservative candidates, we’ll be working in ridings. And, as Justin Trudeau showed up at rallies and came out with me during our campaign, I will do the same for him.  My first job is as premier of Ontario, so I’m going to be doing that job. But yeah, to the extent that I’m engaged in political activity, I’ll be supporting Justin.

Q: Your officials wrote to federal officials in February, seeking co-operation [with the Ontario pension plan]. They got a firm “no” from Finance Minister Joe Oliver in July. First, why were they seeking federal co-operation? What do the feds need to do?

A: The Canada Revenue Agency has the capacity, because of their tax-collecting mandate, to facilitate the contributions, so we were hoping we would be able to work with them by paying them a service fee. We were hoping we could get some help with the administration of the plan.  We always knew there was a possibility that we wouldn’t. Unfortunately, the federal government has decided not to help us.

Q: What was it like getting that letter from Joe Oliver? It was released to my colleagues at about the same time it arrived in your office, and it was blunt.

A: It was pretty infuriating, actually, because we believe that if the federal government and the Canada Revenue Agency can work efficiently with Saskatchewan and with Quebec to provide the same kind of service under an agreement, why not with Ontario?

Q: Can this relationship between a Liberal government at Queen’s Park and a Conservative government on Parliament Hill be repaired?

A: The relationship has been difficult for some time. That doesn’t mean there aren’t areas where we have worked together—the auto sector, for example. We have officials who work together all the time, and there have been joint announcements. There has been some co-operation, for example, around working with First Nations and water. I would expect that those things would carry on. It will never be a warm relationship; that’s a given. But my job as the premier of Ontario is to make sure we find ways to co-operate where we can. We have continually tried to reach out and make the relationship work, but we haven’t received a warm reception.

Q: You’re not shy about participating in the dispute with the Prime Minister, and neither is he shy about it. How can you both be so sure, not only that you’re right, but that your side is a political winner?

A: What I’m sure about is that the people of Ontario need an Ontario Retirement Pension Plan or they need an enhanced CPP. I’m sure this country works better when the Prime Minister works with the premiers.  And I’m sure that it is my job as the premier of Ontario to stand up and say what I know to be in the best interests of the people of the province.  So that’s what I know. Beyond that, history will do the analysis.

Q: You’re backing the third-place horse in this federal race.  Does that make you nervous?

A: It’s a long campaign. I don’t think anybody knows where this campaign is going, and I believe in what Justin stands for, and I’m going to support him in any way I can. I see a problem. I see a solution to the problem. I don’t think Stephen Harper has put forward a solution to the problem. The solution that Stephen Harper puts forward to an insecure retirement for a vast majority of the people in this country who are in their 20s and 30s and 40s is to have voluntary vehicles for saving, voluntary vehicles that people are not using. There’s billions of dollars of room in RRSPs. Young people are not able to save, and yet that’s the solution he puts forward. I’m looking for a solution, and the solution that has been proven to work is a plan like the Canada Pension Plan. It has worked, so we’re basing our ORPP on that kind of design.

Q: By the same token, and at the risk of repeating myself, if young people are unable to save, are they able to part company with a thousand dollars a year, $1,600 a year, for the duration of their working lives?

A: You know, it’s young people who are saying to me, “Thank you for doing this,” because they understand that, in the four, five, six or seven different jobs they’re going to have over the period of their working lives, they’re pretty sure most of those jobs are not going to have a workplace pension attached to them. The nature of work has changed so much in a generation, or a generation and a half, that we need to think of different solutions. That’s why this is a practical avenue for us to take.