Paul Wells on a budget that plunges into deficit, but is at least a plan—and an opposition leader who wants to tear it all down 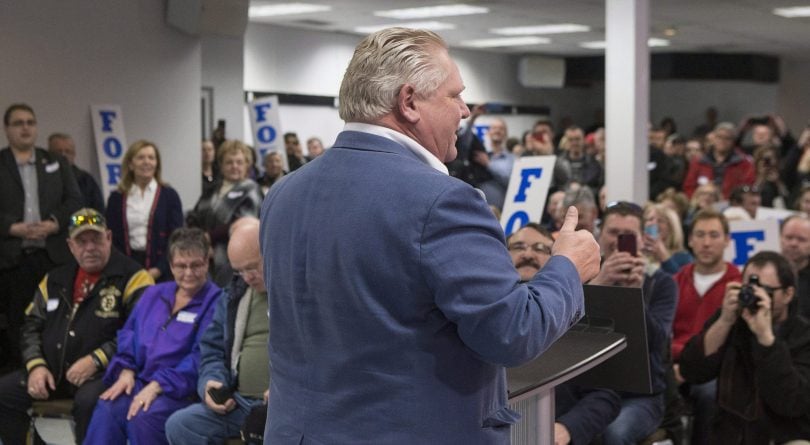 The question before the court is: What kind of heathen are you, you’re not going to support Kathleen Wynne’s nice budget?

Here’s what Care and Opportunity look like. It’s free prescription drugs for everyone 65 and over. It’s free childcare from the age of two and a half to kindergarten. It’s, frankly, a fairly rudimentary drug and dental program (up to $700 for a family of four) for anyone who’s not already covered at work. It’s $19 billion for new and renovated hospitals. Nineteen billion dollars, people.

This is what civilization looks like. This fragile veneer that keeps us human. You’re not going to pick this future? You think you have that luxury? It is to laugh, friend. The dogs are waiting outside, or at least the Doug, and you’re going to nickel-and-dime over whether the provincial government can afford this windfall for Ontario’s hospitals? God. I shake my head.

Sure there’s a cost. Sure there’s a weensy cost. The kind of cost you should be willing to pay, if you care even a jot about your fellow Ontarian. Willing? You should be glad to pay it. The Liberals have promised, with admirable consistency and under two successive premiers, Dalton McGuinty and Wynne, to balance the budget of Canada’s largest province by 2017-18. And on Wednesday, Charles Sousa, the Liberal finance minister, told the legislature he had hit that target. Except it turned out to be a temporary target. Having balanced the budget, the Liberals will make haste to unbalance it again, running deficits of $6.7 billion in 2018-19, $6.6 billion in 2019-20 and $6.5 billion in 2020-21.

The only thing that could interrupt that majestic slow march back to balance, after sprinting back to deficit, is the strong likelihood of at least one other election over the next seven years. Because what we’ve learned during Wynne’s tenure as premier is that the approach of an election makes her noticeably more spendy. It happened in 2014, it’s happening this year, and it will certainly happen the next time Ontarians go to the polls, assuming the Liberal playbook is the one still in use.

But even if the Liberals were to stick to the plan Sousa published on Wednesday, there’d be a long-term burden on the provincial treasury, in the form of growing debt. This part the Liberals didn’t use to promise. In his first budget, in 2013, Sousa promised the balanced budget he delivered today. But he went on to promise he’d reduce “the net debt‐to‐GDP ratio to the pre‐recession level of 27 per cent.” That promise is no longer operative. Net debt to GDP is at 37.1 per cent today, and it’s slated to grow to 38.6 per cent by 2020-21.

Even if you’re not the type to fret over the bottom line, there are other elements of the Wynne-Sousa budget that might give you pause, including the extremely leisurely pace at which they plan to deliver many of their promises. I’m from Ottawa, and it’s annoying enough when the still-new federal government of Justin Trudeau promises to do something wonderful five or 10 years out. Imagine reading this provincial budget, the product of a government nearly 15 years old, and reading grand schemes for another decade in power.

That $19 billion for hospitals, for example, is over 10 years. The $534 million for child care is over six years. The 30,000 long-term beds for senior care will take a decade, which may be more time than the current cohort of seniors has. Better schools? Sixteen billion. Over a decade. I wasn’t expecting Kathleen Wynne to win the 2014 election, so I suppose I shouldn’t scoff at her current three-election plan. But it sure is audacious, to pick one of several available words.

In Ottawa, opposition politicians don’t get to come into the budget lockup to dump on the budget before the minister even gets to table it. Toronto is a more civilized venue, and Doug Ford, the province’s new Progressive Conservative leader (it’s a long story), paid reporters a mid-afternoon visit to play the Ghost of Christmas Pretty Bloody Likely Yet to Come. “My friends, just imagine what Kathleen Wynne will do if she gets re-elected,” he said. “God help us. We’ve seen it many a times.” He predicted a $1,000 tax increase for a family of five. Except he promised it will never come to pass. The Liberals are sure to lose the election, Ford announced, and reminded us that happy day is 71 days hence. When it comes, “Together we will usher in a new era of prosperity. Prosperity such as this province has never seen before.”

Questions. Is Ford promising a balanced budget? “Our goal is always to have a balanced budget,” he said, “but we don’t even know if this”—The Wynne-Sousa tome before him—“is a truthful budget.” Once in power, he said, he’ll go through the budget “line item by line item.”

Where did that $1,000 tax increase come from? “Two hundred dollars each, for a family of five,” Ford said.

The reporter who’d asked him the question puzzled briefly over the answer. That $200 tax increase doesn’t kick in until higher levels of income. “If every one of them makes over $90,000?” This would theoretically include any children in the family.

“Seventy-one thousand,” Ford said cheerfully. “You can check your figures.”

When he releases his election platform, “you’re going to see a very clear plan,” Ford said. Plainly today was not the day to release a platform. Ford is upset about the need for child care and about Wynne’s plan to provide child care, but don’t say he’s promised to scrap her plan. He’ll be very clear. Later.

Reporters with more experience covering Ford cradled their heads in despair after his appearance, but I was impressed. He left himself all possible options: Balancing now or later or, I guess, never; cutting deeply or not at all; keeping Wynne’s plans or scrapping them. The premier has sketched her vision of Ontario’s future in exquisite detail. Her most imposing rival has offered barely a hint about his vision. The campaign that will settle their dispute will start formally in about a month, but who are we kidding, it’s on.