Hillary Clinton remains front-runner in the vast majority of polls 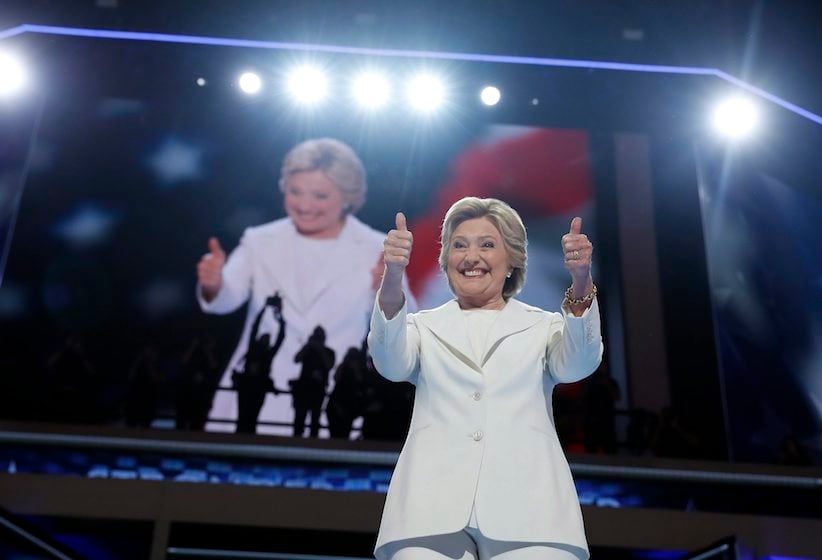 Democratic presidential nominee Hillary Clinton gives her thumbs up as she appears on stage during the final day of the Democratic National Convention in Philadelphia, Thursday, July 28, 2016. (AP Photo/Carolyn Kaster)

WASHINGTON — Some days, it seems Donald Trump is the only person running for president. Daily psychodramas and personal spats have overshadowed all else in this campaign. Even his opponent’s aides say they accept this simple fact: Trump will dominate the news.

Yet he’s not the front-runner. Hillary Clinton is, according to the vast majority of polls. Here’s what the Democratic nominee says she wants to do, if those surveys hold up and she becomes the U.S. president:

— Supreme Court: Seek limits on money in politics by appointing justices who would overturn the landmark Citizens United ruling that undid restrictions on campaign spending by outside groups.

— Health care: Extend existing medicare system for seniors, to allow people as young as 55 to opt into the public plan. Allow people to import cheaper medicine from Canada and elsewhere, in a broader plan to reduce drug prices.

— Trade: There are two sides to Clinton on trade issues. Says she opposes the new Trans-Pacific Partnership deal, which she worked on as secretary of state. Criticizes NAFTA, which her husband enacted as president. Her critics on the left and right accuse her of being disingenuous — there’s the election-campaign Clinton who opposes trade deals, and the governing Clinton who supports them.

— Personal taxes: Four-per-cent tax hike on Americans earning more than $5 million per year. Enforce a 30-per-cent minimum rate on people earning $1 million. Restore tax rates on wealthy estates to the higher 2009 rate. No increases for people earning less than $250,000. If approved by Congress, analysts at the non-partisan Tax Foundation say her plans would increase federal revenues between $191 billion and $498 billion over a decade, while reducing overall economic growth by one per cent,

— Terrorism: Has floated the idea of a no-fly zone in Syria — which the current administration says would be ineffective and problematic. Talks about an “intelligence surge,” but her plan for fighting ISIL otherwise resembles Obama’s: Take away territory in Syria and Iraq, attack support systems for foreign fighters, counter online propaganda, and seek partners in Muslim communities to identify dangerous actors.

— Guns: Extend background checks to purchases at gun shows and on the Internet. Make it a federal crime to buy a gun for someone who can’t do it legally. Make it harder for domestic abusers, violent ex-cons, and the severely mentally ill to purchase weapons.

— Social programs: Follow other developed countries, and guarantee up to 12 weeks’ paid family leave to care for a new child or a seriously ill relative. Ensure people get two-thirds of their wages while on leave. Fund this leave with a tax on people earning over $250,000 — which some skeptics say won’t be enough to fund it. Universal preschool for every 4-year-old, and support for programs to make child care more affordable.

— Tuition: Pushed by Bernie Sanders, has agreed to support zero tuition at in-state colleges for students whose family income is less than $125,000. Had already proposed measures to allow students to refinance loans, excuse parts of some debt, or get help from employers in paying it down.