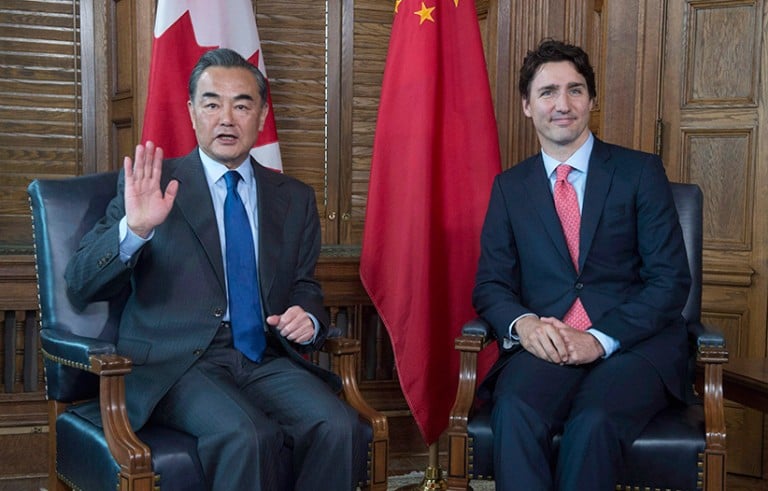 BEIJING — Formal free trade talks between Canada and China have yet to proceed because of snags over labour, the environment and concerns linked to Chinese state-owned enterprises, says Ottawa’s envoy to Beijing.

Li spoke to reporters through a translator after meeting with Prime Minister Justin Trudeau. Asked about the remarks, Saint-Jacques denied that the two sides had agreed to begin formal negotiations.

But Saint-Jacques, who accompanied Trudeau at meetings Wednesday with Li and later with President Xi Jinping, did share some details of the prime minister’s position on the matter.

“The prime minister said that the approach that Canada takes when it comes to a free trade agreement is that it must include a number of important items — he mentioned two political and two economic issues,” Saint-Jacques said.

On the political side, he said it was important for Trudeau that modern free trade deals include chapters on labour and on the environment.

Saint-Jacques said the prime minister also made it clear that any deal with China must “address the impact of state-owned enterprises” and procurement.

“And as you know, those areas are problematic,” he said.

“I would say that a lot more work needs to be done on those areas. I would say the prime minister was quite clear on this.”

Takeovers of Canadian firms by Chinese state-owned enterprises have proved highly controversial in the past. The concerns led the former Conservative government to restrict state-owned Chinese investment in Alberta’s oilsands.

For its part, China has been urging Canada to negotiate a free trade agreement.

While Trudeau has said he hopes to broaden trade with the growing superpower, he has been cautious about stating he would like pursue formal talks.

A senior Canadian official said Wednesday that some technical discussions related to free trade with China have been held and will continue, but the official stressed that there have been no negotiations.

The countries, he noted, also agreed to establish annual meetings between the Chinese premier and the Canadian prime minister on a range of issues, including national security and the rule of law.

“This year marks 45 years of diplomatic relations between Canada and China,” Trudeau said as he stood beside Li in the Great Hall of the People, which overlooks Tiananmen Square.

“My father, Pierre Elliott Trudeau, played an important role in establishing a partnership between our two countries when he was prime minister. So, I’m very happy to be extending that effort now.”

The Chinese leadership, which has high expectations of the 10-month-old Trudeau government, have given him a warm welcome.

Outside the Great Hall and across the square, Chinese flags fluttered alongside the Maple Leaf. Trudeau was also greeted by a Chinese honour guard, ceremonial cannon blasts and a booming rendition of “O Canada,” which echoed across Tiananmen.

Asked if he had raised human rights concerns and the case of a jailed Canadian, Trudeau said he’s “highlighted a number of consular cases” every time he’s had the opportunity to sit down with Chinese leaders.

Those cases include Kevin Garratt, a Canadian imprisoned for more than two years in China on espionage charges.

Trudeau himself has indicated in the past that there’s no evidence to support the accusations against Garratt. The prime minister did not say what China has told him about Garratt’s case.

Li insisted that China is a country of the rule of law and said judicial authorities would handle cases in strict accordance with the law. He added that individuals will be treated in a “humanitarian way.”

“With respect for cultural diversity, I think it is natural for us to understand that our two countries may have differences, on some issues this is only natural,” Li said.

“But I also believe that we have far greater common interests between us and on that basis there’s every reason for us to have candid dialogue about differences and work together for proper settlements of our differences.”

The Garratt family issued a statement Wednesday through their lawyer, saying they were “extremely frustrated” by a lack of progress in securing his release and enabling him to obtain “critically needed medical treatment.”

“Kevin should be released to allow the two countries to move forward to develop stronger ties and co-operation on many levels,” the statement said.

The state-run Xinhua news agency published a commentary Tuesday that chided Canada for allowing “groundless” human rights concerns cloud what could be a productive relationship with China — especially since Canada’s own reputation on the treatment of Aboriginal Peoples is less than stellar.

“It is penny wise and pound foolish to spoil China-Canada ties with these domestic concerns in Canada,” the commentary reads.

Saint-Jacques, who has served as ambassador in Beijing for nearly four years, said China has made lots of progress on human rights when it comes to improving economic conditions, including its feat of helping lift 600 million people out of poverty.

But he added that over the last three years, the country has been moving backwards on personal freedoms, particularly when it comes to the Internet.

“That’s why Canada has used opportunities to express its views to China.”