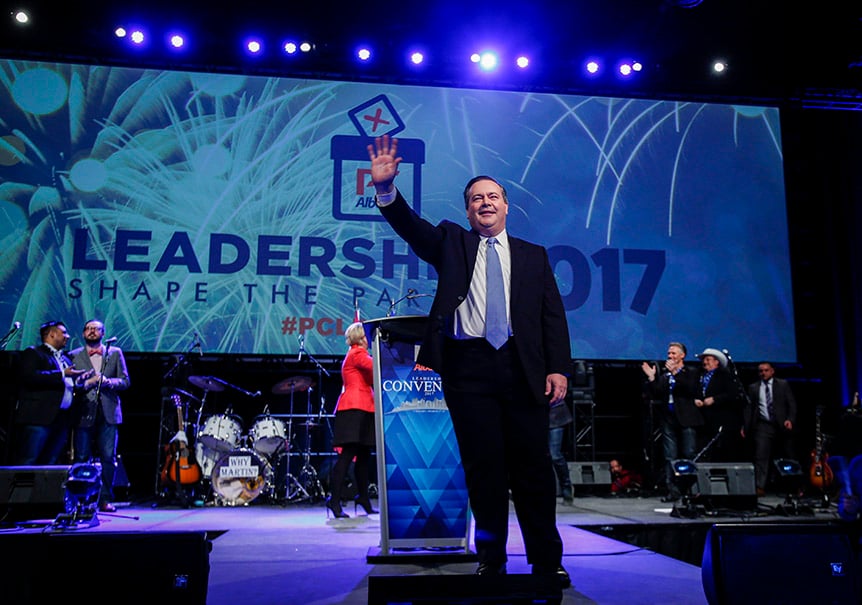 EDMONTON – The leaders of Alberta’s two main conservative parties met Monday to discuss what steps they should take toward a potential merger.

Newly elected Progressive Conservative Leader Jason Kenney said a team of Wildrose and PC party members will try to come up with a draft unity agreement over the next six weeks.

“I just completed an excellent 35-minute meeting with my friend and former colleague Brian Jean. I was very encouraged by the positive, constructive tone of the meeting,” Kenney said outside the legislature.

“Brian and I agreed on every point. We discussed the initial steps in the process to take us to unity.

“We hope to have that team in place by the end of this week and we intend to give that discussion team a mandate to report back to the two parties by the end of April.”

Kenney said if the draft agreement is acceptable to the leaders, it would then be presented to the PC and Wildrose caucuses and then party members.

Jean declined to speak with reporters after the discussion. The media was not permitted to photograph the two men together at the meeting.

Earlier Monday Jean told reporters that he wanted to congratulate Kenney on his election as PC leader and start drawing a road map on how the two parties could merge.

“I’m not going to get into the details of how this merger will work,” he said. “I’m walking into this meeting with an open mind and I’m hoping that we’ll have a good constructive meeting.”

But Jean stressed again that any new conservative party would have to be created under a Wildrose legal framework and with the approval of Wildrose members. He also said he’s committed to becoming Alberta’s next premier.

“If I receive that privilege, I’m sure it will be behind a consolidated conservative movement going forward.”

Alberta Premier Rachel Notley congratulated Kenney on his victory but didn’t waste any time criticizing his plan to repeal the bulk of the NDP’s legislative agenda. She said that would mean “putting big money back into politics, raising school fees, recrowding our school classrooms and reversing the approval on (the) Kinder Morgan” pipeline.

“I would suggest pretty quickly he’ll have to come clean on what his actual plans are,” she said.

“I look forward to having our mainstream ideas contrasted with the rather more extreme ideas that we hear from folks on the other side of the aisle.”

Also on Monday, a group of five lawyers released a legal review that suggests there is no reason why the PC and Wildrose parties cannot legally join to form a new political entity before the next provincial election.

The lawyers have been working on the issue since last fall and include supporters from both parties. It was not commissioned by either political party.

“We have concluded that a merger can be done,” said spokesman Andy Crooks. “Moreover, it is our opinion, that it can be done without the consent of the chief electoral officer of Elections Alberta.”

Alberta election rules forbid two parties from merging and dictates that they fold up and surrender their assets.

But the lawyers suggested both parties could register as corporations and merge as corporate entities. That would also allow the transfer of assets between the two parties.

Crooks said Elections Alberta should have waited until it received a proposal before expressing opinions.

“The Elections Alberta office was starting to issue press releases. Now, we weren’t asked to answer these questions, but neither were they. We’re simply volunteer lawyers. They, on the other hand, are regulators with serious powers,” he said.

“I take some umbrage at regulators announcing dispositions of questions before they’re asked.”

The team of lawyers was recruited by former Wildrose Party president Dave Yager, who was told by some donors and party members to “go figure it out.”

“Everyone’s been talking about what to do since the last election and some really smart people said these parties have got to merge.”