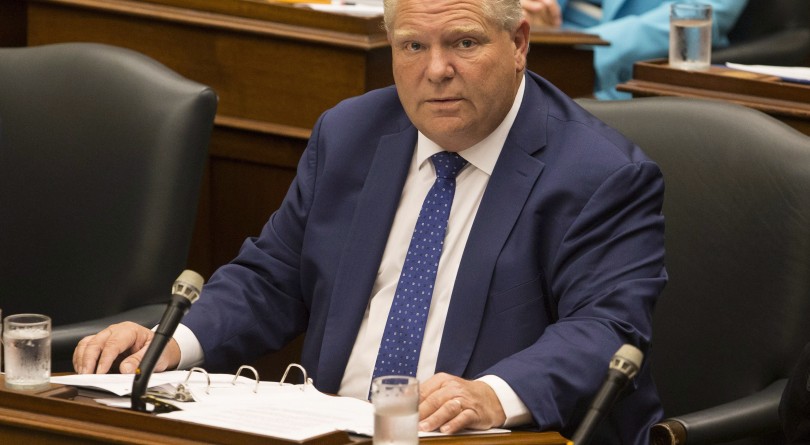 Here’s a sense of how chaotic things have gotten at Toronto city hall: one councillor asked the city’s lawyer on Sept. 13 what would happen if they all simply quit in protest, en masse. Who would run the city then?

The answer: the province would step in.

Councillors are loath to see that happen. They already feel the Ontario premier has done enough, slashing the number of wards in the upcoming municipal election from 47 to 25. The city took the province’s Bill 5 to court and enjoyed a brief moment of jubilation when a judge ruled it unconstitutional to change the ward boundaries in the middle of an election cycle. Undeterred, mere hours later, Premier Doug Ford announced he would invoke the notwithstanding clause—a section of the Charter of Rights and Freedoms never before used in Ontario—to push the same legislation through, whatever the findings of the court.

“I was elected. He was appointed,” Ford said of the judge who ruled against Bill 5. He added at a press conference that he won’t be shy about using the notwithstanding clause in the future should judges strike down bills coming from his legislature.

If Ford is indeed acting like the “King of Ontario” as NDP opposition leader Andrea Horwarth claims, what safeguards are in place should he, or any future premier, go further than trying to create chaos in a city election?

In the face of citizen complaints and court rulings that get in his way, how far, exactly, can Doug Ford go?

“The fact of the matter is, the safeguards are internally observed norms—an internal sense of values observed by the premier,” says Carissima Mathen, a constitutional law professor at the University of Ottawa. If a law is challenged on the basis of a charter right that is subject to the notwithstanding clause, the final say rests with the premier, provided he or she has the confidence of the legislature. In the case of Ford and his majority government at Queen’s Park, that confidence clearly exists. “There is no other referee for that—not under our current precedents and not under our constitution,” Mathen adds.

That hasn’t stopped Toronto city councillors—or anti-Ford Ontarians—from thinking up creative ways to stop the premier. Councillor Josh Matlow put forward a motion requesting the federal government establish a “city charter” giving Toronto and other municipalities authority over their own elections. Councillor Kristyn Wong-Tam, meanwhile, suggested Justin Trudeau step in and use Section 90 of the Constitution to have the federal government “disallow” this provincial law.

Since Ford has thrown us into a constitutional crisis by invoking "notwithstanding clause" to override a judicial ruling that rendered #Bill5 unconstitutional.

Now is a good time for the PM to use s.90 of the Constitution Act, to "disallow and reserve" provincial legislation. pic.twitter.com/M7t4o1koMf

To call either option a Hail Mary pass would be an understatement. Mathen says any talk about Section 90 is unhelpful because it’s unrealistic. “I would put the chances at less than zero that a prime minister would invoke disallowance to deal with this,” she says.

No wonder, then, that when Justin Trudeau was asked to weigh in, he voiced disappointment with the Ontario government’s move, but added he “won’t be weighing in on the debate about how big Toronto municipal council should be.”

But what about in the future? If Ford tries to pass a law that really upsets Ottawa, would Trudeau reconsider and invoke Section 90? Not likely, because Canada has an unwritten understanding—a constitutional convention—against Section 90, “which means it will not be used,” says Dennis Baker, a political scientist at the University of Guelph. “It is law. You could still use it, but you would have to face political consequences which would be pretty dramatic. Not only would every provincial government be upset about this federal intrusion, one province in particular—Quebec—would be particularly upset. It would be a federal government risking its electoral survivability.”

Back in Toronto, some locals are resorting to writing to the province’s lieutenant-governor, Elizabeth Dowdeswell, asking her to exercise her power and not sign the Ontario bill that would alter the Toronto election. For a bill to become law, it requires royal assent, permission that represents a kind of final safeguard.

It's the definition of "long shot", but I wrote and called in to the Lieutenant Governor's office today, to protest Ford's interference in responsible government. Here's what I said.

Baker never wants to say never, but adds only a most egregious and extreme scenario would prompt a vice-regal representative to make such a move. “They are a legislative formality,” he says of lieutentant-governors. “If [Dowdeswell] were to do that, immediately the government would fall and we’d have to have an election because the sovereign would not have confidence in the person advising them, the premier. We would be into all kinds of chaos. I can’t imagine that happening.”

Despite Ford’s claim that he won’t be shy about invoking section 33 again, he can’t necessarily use it to push through any legislation his party puts forward. The notwithstanding clause applies only to certain sections of the charter: section 2, our fundamental freedoms (such as freedom of expression and freedom of association); sections 7-14, which address our legal rights (such as freedom from being subject to cruel and unusual treatment), and finally section 15, our equality rights (protections against discrimination based on race, ethnic origin, colour, religion, sex, age or mental or physical disability).

Still, it could soon come into play in other legal challenges the Ford government faces. For example, if a court finds the province’s decision to use a 20-year-old sex education curriculum in schools to be in violation of section 15 of the charter (equality rights); or if a judge found the York University strike was protected by section 2 (d) (freedom of association), Ford could indeed invoke the notwithstanding clause to circumvent the ruling.

“A ruling on that would not be the last say—the court could be overturned—but it would need a constitutional amendment,” says Joseph Magnet, a University of Ottawa law professor. “To amend the constitution to overturn such a decision would require the participation of Ottawa. Premier Ford would have to persuade his colleagues in federal Parliament to join him in overturning such a court decision. That would be very difficult to do.”

Finally, Ford can only go so far as his caucus allows him. His party commands a majority at Queen’s Park, but in theory, at least, his fellow Tory MPPs could always vote against their leader in the legislature if they felt his actions went a step too far, Baker says. As it stands, they show no such inclination. But in politics things change quickly. “Trampling over people’s rights,” notes Baker, “tends not to be too popular.”