Leslyn Lewis announces a run for the Conservative leadership

Politics Insider for March 9: Another CPC hopeful joins the fray; a major warning from NATO; Ontario to end mask mandates 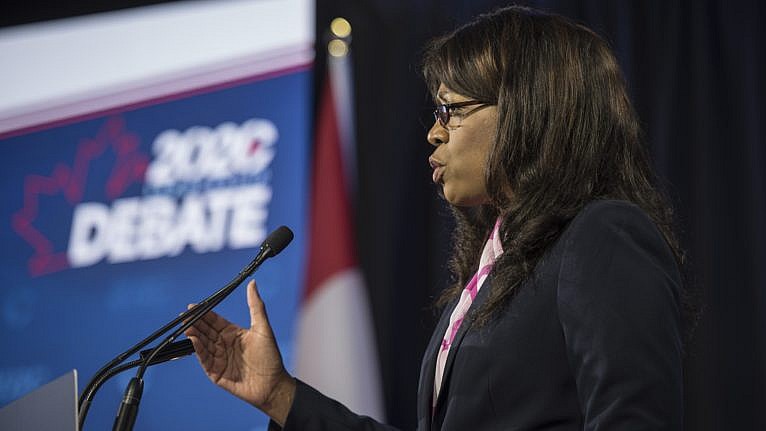 Leslyn Lewis announced Tuesday that she is running for the CPC leadership, the Star reports. She is the second candidate to join the race, after Pierre Poilievre. Jean Charest is to announce in Calgary Thursday. Lewis, who led a surprisingly strong campaign in the 2020 leadership race, is a social conservative with a large base of support.

The video she included is an excerpt of her speech in the House of Commons last month on the invocation of the Emergencies Act by the Liberal government, a controversial move framed as the only way at that point to end a three-week long protest in Ottawa. Lewis attacked Prime Minister Justin Trudeau, saying he refused to listen to anyone who didn’t share his opinion and was undermining democracy by using the law. “Guarding our freedoms and upholding our democracy means we need to have compassionate hearts and listening ears,” she said.

Fractured: Don Martin, writing for CTV, handicaps a Charest-Poilievre race, and finds it hard to imagine the party rallying around either of the men.

If Charest wins … he will face more than a few MPs and their assorted bloodhounds who have already declared him unfit to lead the party for being too left. Some of them may need to be evicted to find a home in the People’s Party under increasingly-unhinged Maxime Bernier. But that’s the easy part …

As for Poilievre, he’d better be a helluva chameleon. He will have to shift from proudly standing with the trucker convoys and worshiping every extra barrel of oil production to bonding with the middle-road, climate-fretting Ontario voters he’ll need to win a general election. Spoiler alert: It’s hard. Ask Erin O’Toole.

No word on defence budget: In Latvia on Tuesday, Justin Trudeau announced that Canada is extending its military mission there, Global reports, but he didn’t say if  Canada will boost defence spending: “We understand the urgency that is presented right now in the world with Ukrainians standing strong against this illegal Russian invasion. Those weapons are much more useful and in the coming weeks in the hands of Ukrainian soldiers fighting for their lives than they would be in Canadian hands. But of course, we need to make sure we replace those weapons rapidly.”

“The allies are helping Ukraine uphold their right for self defence, which is enshrined in the UN charter,” Stoltenberg said after a meeting with Trudeau, Spanish Prime Minister Pedro Sanchez and Latvian Prime Minister Arturs Krišjānis Kariņš at the Adazi base. “Russia is the aggressor and Ukraine is defending itself. If there is any attack against any NATO country, NATO territory, that will trigger Article 5.”

Canadian energy? In the Star, Heather Scoffield writes that the Trudeau government is pondering increasing Canadian energy exports to Europe to help allies reliant on Russian petroleum, but that would come with a price.

Indeed, there’s an active push on by some — but not all — federal cabinet ministers and the energy sector to find short-term ways to increase Canada’s oil and gas supply to world markets. They’re scouring the country for projects that can be expanded, or quickly approved and brought up to speed. They’re also looking hard for extra capacity to ship out the added supply. With oil and gas prices so high, the calculus of what is economical has changed. But let’s not kid ourselves: there will be a cost — in emissions.

End of mandates: Ontario is to drop mask mandates in shops, restaurants and secondary schools on March 21, the Star reports. Ontario’s chief medical officer of health Dr. Kieran Moore is to announce the move at 11 a.m., the Star has been told.

Ford ahead: Philippe J. Fournier, in Maclean’s, takes a close look at the latest Ontario Leger poll that shows the PCs with 39, and the Liberals and NDP tied at 27.  That means the Tories should win the election to come.

A PC majority remains the most likely scenario. It would simply not be enough for either the Liberals or NDP to siphon voters away from each other to win—from a purely mathematical point of view, one of these parties has to gnaw away at PC support to tip the balance in its favour. Let us recall that Ford’s PCs won a 76-seat majority in 2018 with just over 40 per cent of the popular vote. So while PC support may stand just below its 2018 level, the opposition is far more divided than in 2018.

The news comes after Ottawa police recently revealed they were investigating the MPP’s Twitter activity due to comments related to the so-called “Freedom Convoy” protests in the capital city. In messages to CTV News Toronto, the Lanark-Frontenac-Kingston MPP said the social media platform suspended his account because he “stated the truth.”

In February, during the convoy occupation of Ottawa, Hillier called for his followers on Twitter to call emergency phone lines in Ottawa.

Convoy to Kyiv: Speaking of the convoy, Global has an interesting story on how some of the online forums devoted to the convoy are now spreading misinformation about Russia’s invasion of Ukraine.

Sunwing fallout: Omar Alghabra announced Tuesday that six passengers from the infamous Sunwing flight to Mexico received “penalties” of up to $5,000 because they were not fully vaccinated when they boarded the flight to Cancun, Global reports.

Bankers make bank: Pay awarded to the CEOs of Canada’s five largest banks rose by 23 per cent last year, the Globe reports. Five bank CEOs earned a combined $70-million in total compensation, compared with $57-million in 2020, according to company filings.