Paul Wells: The plans that premiers Legault and Ford released on Monday were road maps and not timetables—and there are good reasons why 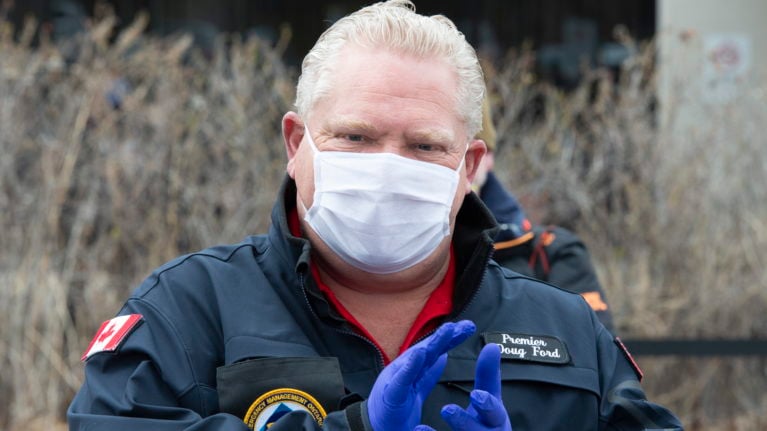 At last the day came when the politely populist premiers of Ontario and Quebec—the provinces where four-fifths of Canada’s COVID-19 patients reside—announced their plans to roll away their stone and step into the post-pandemic light.

The plans were nearly empty and the premiers looked terrified.

The Ontario document, A Framework for Reopening Our Province, has timelines that mention no date after April 27, which was the day the document was released. It listed three phases: “Protect and Support,” which is what’s been happening; “Restart,” which theoretically comes next; and “Recover,” which in theory will happen someday. The “Restart” phase is described in conspicuously belts-and-suspenders terminology: a “careful, stage-by-stage approach” during which “public health and workplace safety will remain the top priority” and “public health officials will carefully monitor” whether there are new outbreaks “for two-to-four weeks.” The big question: “whether it is necessary to change course” and essentially revert to the current cave days.

This next phase will kick in when cases are durably declining, hospitals can handle any influx of new cases, and public-health tracing can follow any new cases. The second of those boxes, mercifully, has probably already been ticked. The third may never be, because this is such a sneaky virus. Where is Ontario on the first? A reporter asked. Premier Doug Ford couldn’t say.

Quebec, the epicenter of the Canadian outbreak, has a slightly more concrete plan about which Quebec officials seemed commensurately less confident. “If we see that the situation isn’t under control, we’ll push the timetable back,” premier François Legault said. “The watchword will be prudence.”

Another watchword will also be regionalism. Montreal is in the very early stages of a decline in active caseload following what was, and in many ways remains, one of the worst outbreaks in North America. The rest of the province looks more like the rest of the country. So Legault is re-opening elementary schools and public daycares outside greater Montreal in two weeks, on May 11. In the Montreal region they’ll open a week later. High schools stay closed until September.

And even that timetable exaggerates the imminence of a post-COVID social era. Schools will reopen “if and only if” the situation doesn’t deteriorate from now to May 11, Legault said. And school won’t even be mandatory: “Parents who want to keep their children at home won’t be penalized in any way.”

It’s pretty easy to anticipate 72 hours of large-scale game theory beginning on May 9, as tens of thousands of parents use Facebook, Zoom and text messages to ascertain whether they’re better off sending the kids to school or keeping them home. Class sizes will, in any event, be capped at 15, essentially requiring some number of parents to keep their children out.

And after that? When does your local barber shop, dry cleaner, skate sharpener or driver’s license office open? We’ll see. It’s a far cry from the easy certainty of commentators like the  shock jocks on Quebec City radio and the more nuanced impatience of columnists in the Sun papers, which essentially delivered their readership whole to the Ford Conservatives.

It’s an impatience all of us have heard in family conversations. It’s an impatience most of us feel. You know the songbook as well as I do: Look, this is ridiculous, nobody signed on for global economic euthanasia, nobody was told in March that we’d still be here in May and maybe July and maybe January, everybody has to die of something, suicide and obesity and delayed surgery kill people too, and we’re pushing those numbers up as we try to tamp this one down. (Suddenly everyone’s a public-health ninja who knows more about all this than Theresa Tam and Bonnie Henry.)

But it’s quite another matter to be the person in charge when the rubber hits the road. People are full of bravado for society and sometimes less so for their circle. Two weeks seems a reasonably manageable timeframe for a partial resumption of what was, after all, everyone’s everyday life until mid-March. But push it forward and make it personal: How do you feel about sending your own son or daughter back to school tomorrow? Are you ready for a family dinner this weekend? Everyone’s got to die of something, so how about Uncle Ned in late May by drowning in his own pulmonary fluids? That’s a harder call. It helps explain why the plans Legault and Ford released on Monday were, in Ford’s words, road maps and not timetables. And why it left some columnists, whose responsibility extends no further than their keyboards—I know, I live there too—righteously cranky.

The fact is, it’s hard to plan next steps because disaster continues despite the best efforts to contain it: 57 deaths in Ontario in one day, 84 in Quebec. Many more still to come. The closest parallel to this coronavirus in recent history was the 1918-19 flu outbreak, and that one was worse in the fall than it had been in the spring.

Legault and Ford aren’t even leading the process of deciding what happens next: like good populists, they’re being led by it, and if they looked worried on Monday it’s because they’re well aware there’s a shift change underway in the reopening debate. The debate was led until now by people who gain by sounding bold. They’re finding themselves outnumbered by people with everything to lose. Suddenly waiting doesn’t sound like such a bad idea.