Our readers write: '... at least Trudeau’s pot smoking didn’t cost the taxpayer anything'

A selection of comments from Maclean's readers 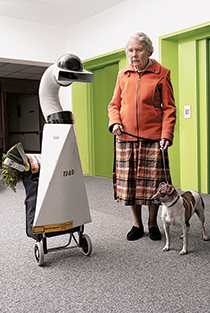 What a drag it is getting old

Harvard demographer Michael Teitelbaum points out that if government makes life hard for young men and women, an unintended side effect is that they will have fewer children (“The curse of small families,” Society, Sept. 9). It’s easy to see how to turn this around 180 degrees: since young families are providing the next generation who will take care of baby boomers, we should share some of their financial burden to make life easier for them. So let’s subsidize childcare, or at least bump up the universal child care benefit from its far-too-modest value of $100 per month. Raising the birth rate like this would be attacking at its roots the problem of our population greying too fast. The longer we wait, the worse it will get.

My legally blind, independently living 87-year-old mother fell and broke her knee in early July. Because she was confined by a walker and a brace on her surgically repaired knee, I spent most of the summer living with her, dealing with the multitude of agencies that were themselves a problem. She can afford a seniors’ home, and probably would love it, but won’t go. She won’t use Meals on Wheels. She won’t use the city’s accessible transportation services. She can’t drive. I love her dearly, but it is like having a 12-year-old insisting they can live alone. Mostly they can, but their judgment is just off-kilter enough to be worrisome. But hey, Ontario has full-time junior and senior kindergarten! Maybe we can change them into full-time “altengarten” instead.

There are many aspects to the looming problem, not least of which is the limited ability of individuals to pay for long-term care in their last years and the inability of government to subsidize them. That issue could be partially addressed by a federal government program allowing individuals who continue to work past 65 to “bank” some government-subsidized time in an assisted living or long-term care facility. Whenever anyone continues working past age 65 and delays collecting Old Age Security (OAS), it has a positive impact on government revenues in three ways: a) the worker continues paying more taxes than he or she would as a retired person; b) the payout of OAS is delayed; and c) the length of time that the individual collects OAS is shortened. A side benefit would be a similar impact on the CPP. To make it attractive, the “banked” time would need to be transferable to a spouse.

You did not cover stats regarding all the seniors who actually live at home in good health. Cities seem to be getting on board with improved zoning and city infrastructure. Issues of incompetent drivers are problematic, but improving public transit is one important solution for all citizens. Baby boomers tend to be more healthy than prior generations and, sadly, than the succeeding generations. I am appalled at the condescending tone of those of you quoted who are caring for seniors and family members. If, at the age of 90, I wish to live in my own home and consume only coffee and rye bread, I only hope that no one is there to interfere.

The upside of police states

No sane person wants a police state like the one Adnan Khan suggests is now in place in Egypt (“An old bogeyman,” International, Sept. 9). Yet I find something appealing in an Egypt free of the annoying Western millstone of political correctness. The current Egyptian leaders have found that apparently their most dangerous adversaries meet certain criteria; therefore, they concentrate their resources on defending against these groups. While one sympathizes with those such as Adnan R. Khan, who suffered (but seemingly not too severely) from such apparent racial profiling, it is better than feigning ignorance about terrorists who have overwhelmingly come from one grouping and instead make obvious innocents unduly suffer for the crimes of those we dare not name. If Khan now feels affronted, surely he realizes how much more terrible things would have been had Mohamed Morsi been allowed to turn Egypt into a theocratic nightmare.

“When bumping off a leader is justified” (Opinion, Sept. 9) was a fabulous article by Barbara Amiel: relevant, factual and so compelling. Nice that a Canadian woman shows the kind of courage and brains that Barack Obama is missing. If the U.S. followed her advice, most of the horrors of the last 20 years would not have happened. Her suggestions for an alternative response—instead of the appeasement principle going on in the Middle East—would have made all the difference. Good for you, Barbara!

Slam on the brakes

The post-Lac-Mégantic Senate report quoted in “Picking up speed” (National, Sept. 9) said that the inadequate railcars should be upgraded or replaced. The industry said that it would cost more than a billion dollars to make them safer. The article states that a more affordable route to take would be for the rail industry to boost their liability coverage to clean up a problem. Doesn’t this mean letting the accidents happen first? How much money does it take to clean up the loss to families and the environment of a Lac-Mégantic? Nothing is ever totally safe, but to continue using unsafe equipment only because you have damage insurance is not only illogical, it’s criminal.

The recent train disaster in Lac-Mégantic revealed some serious shortcomings of the railways in this country. I have been waiting for an expert on railcar brake systems to point out that the air brakes on railcars are virtually unchanged since their invention by George Westinghouse in 1868. For approximately 50 years, all air-equipped highway trucks have what are commonly called maxi brakes, or spring-actuated emergency parking brakes. This system requires air pressure to be maintained at a safe level, or the brakes are applied and the vehicle cannot move. It also provides an instant, automatic application of parking brakes requiring no manual effort. If this system were installed on trains, this disaster could not have happened. When the locos were shut down, the train gradually lost its air pressure and the brakes released, allowing the train to run away. Trains should have been fitted with the maxi brakes long ago. It took a few truck runaways to force [the industry] to moderize, and Canadians must demand the same of the railways.

Emma Teitel’s article “Rainbows over Russia” (International, Sept. 9) argues that a boycott of the 2014 Sochi Olympics would be difficult and possibly counterproductive. An alternative, simple yet powerful protest seems obvious. During the opening day ceremonies, an event hugely anticipated and [aired] live throughout the entire world, why don’t all the athletes willing to express solidarity raise small rainbow flags and hold them aloft as they circle the stadium? This gesture would be photogenic and poignant. Putin would be unable to arrest so many people in full view of the international community.

Rather than being an irritation, ads before movies can be part of the experience (“The pre-show must go on, and on . . . ,” From the Editors, Sept. 2). As a Canadian who lived in England in the ’70s, it was very noticeable then that there was a whole program of ads before the feature, compared to Canadian screens (so maybe you need to blame the Brits). The Pearl & Dean jingle, from the company that organized the ads, was a comforting start to the show. Also, ads in the theatre were usually funnier and on a bigger scale than TV ads at the time (or were entertainingly cheesy ones for local stores and restaurants); they complemented the main feature. If it is an unbearable experience now, it is the quality of the ads that is the factor.

I was struck by the phrase “Who earns what” on the front page and the accompanying special report in the Sept. 2nd issue. Is “earns” the right word? Maybe “gets”—suggesting nothing about worth and value for work done—might be better. “Earns” suggests some sort of societal balance and value for work rendered that benefits more than just a few. To get $55 million, or even $12 million, or $1 million in a world of extreme inequalities such as ours seems gross in the most generous view of life.

Kick the Harpers out of their house

The Harpers don’t own 24 Sussex; Canadian taxpayers do (“This old house,” National, Sept. 2). As landlords, we have the right and the responsibility to maintain our historical structures. Acting on our behalf, the National Capital Commission urgently recommends an extended period of vacancy to properly renovate and restore this building. The Harpers refuse to move. This is not their call; it is ours as landlords. They should have to move promptly to help reduce heating costs and to preserve the building.

While Stephen Harper and Peter MacKay like to say that only the Conservative government is focused on the economy, at least Trudeau’s pot smoking didn’t cost the taxpayer anything (“Poll up a joint,” National, Sept. 9). The same cannot be said about Harper’s Senate appointments or MacKay’s fishing trips.