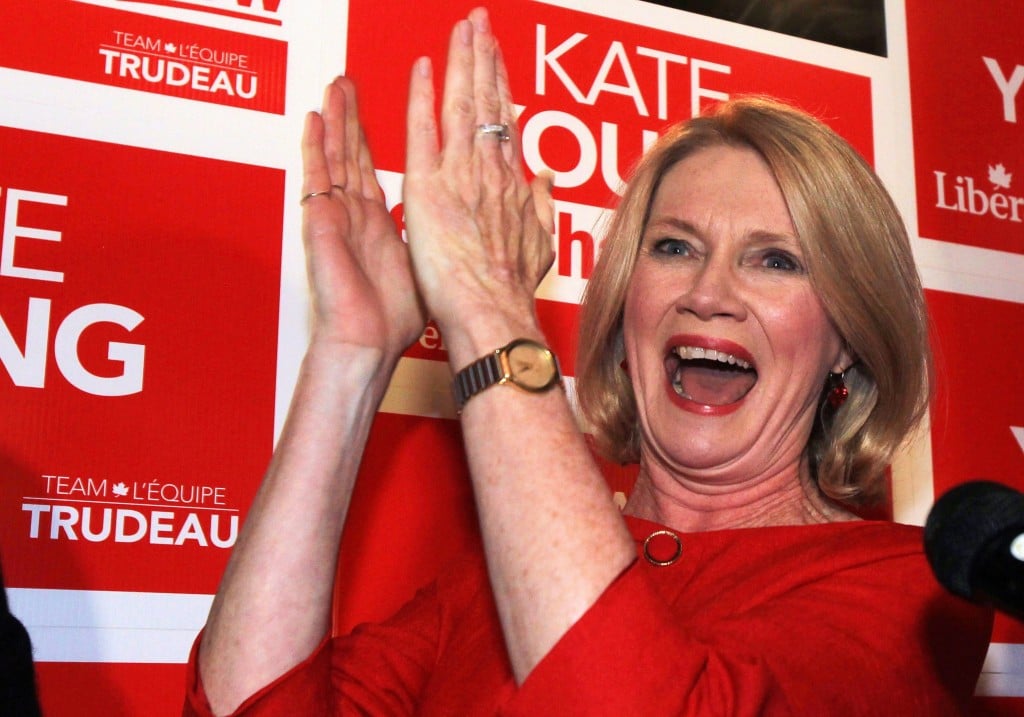 Liberal candidate Kate Young reacts to her supporters in her win over Conservative incumbent Ed Holde in the riding of London West, Monday, Oct. 19, 2015, London, Ontario. Young wrote the Canadian Radio-television and Telecommunications Commission earlier this month to encourage renewal of Bell Media’s licence for CTV London, where she was news anchor for many years. THE CANADIAN PRESS/Dave Chidley

The Ontario MP wrote the Canadian Radio-television and Telecommunications Commission earlier this month to encourage renewal of Bell Media’s licence for CTV London, where she was news anchor for many years.

She is member for the riding of London West, where the station is located, and also parliamentary secretary to Transport Minister Marc Garneau.

Federal conflict of interest and ethics commissioner Mary Dawson issued a guideline in October 2013 saying cabinet ministers and parliamentary secretaries “may not under any circumstances” attempt to intervene in the decision-making process of an administrative tribunal, such as the CRTC, on behalf of any constituent in any riding.

Such contact may be considered an attempt to influence a decision in breach of the Conflict of Interest Act, Dawson wrote in a directive for public office holders – as ministers and parliamentary secretaries are known under the law – on serving constituents.

Section 9 of the act says no public office holder may use their position to seek to influence a decision “to improperly further another person’s private interests.”

Parliamentary secretaries, though not members of cabinet, serve as key representatives of the government and as important links between ministers and Parliament, according to a federal guide published in January.

A parliamentary secretary supports his or her minister by helping advance the government’s legislative program, speaks in the House of Commons in the minister’s absence, acts as a liaison between the minister and caucus and may be given specific duties for policy development or public engagement.

The Canadian Press came across Young’s letter during a routine examination of filings with the CRTC.

When asked about the letter, Jocelyne Brisebois, a spokeswoman for the commissioner, said Wednesday that Dawson was unaware of it but “will look into the matter.”

In a statement late Wednesday, Young said that when she wrote the letter, she was acting as a voice for her community “and did not take into consideration the implications of my role as parliamentary secretary and sincerely apologize for any inappropriate actions on my part.”

“I have spoken with the conflict of interest and ethics commissioner’s office about my obligations and will comply fully with any guidance they may have.”

Dawson issued her October 2013 guideline after public controversy over letters to the CRTC from a Conservative cabinet minister and parliamentary secretaries.

Earlier that year, Dawson had admonished Jim Flaherty, then finance minister, and two parliamentary secretaries – Eve Adams and Colin Carrie – for breaching the Conflict of Interest Act by writing letters to the broadcast regulator in support of radio licence applications.

In February 2016, Dawson ruled that former Conservative MP Parm Gill contravened Section 9 of the act by sending letters of support to the CRTC on behalf of two constituents when he was a parliamentary secretary.

In an Aug. 3 letter on behalf of the TV licence renewal, Young said she understands the importance of supporting Canadian culture.

“Bell Media’s proposals in their application seek to better position Canadian broadcasters to contribute to the broadcasting system in this country while continuing to offer programming that entertains, informs, and engages audiences,” the letter said. “I therefore ask that the CRTC approve Bell Media’s application.”

The CRTC has yet to decide on the licence renewal.

Young’s letter makes no mention of her duties as a parliamentary secretary. Ordinary MPs are not precluded from sending letters of support to the CRTC.

In addition, Section 64 of the Conflict of Interest Act says nothing in the act bars a member of the House of Commons who is a public office holder from activities he or she would normally carry out as an MP.

However, in her February report on the Gill letters, Dawson wrote: “Parliamentary secretaries cannot remove themselves from their responsibilities as reporting public office holders by signing letters of support as members of Parliament, even if they do not include their parliamentary secretary title.”