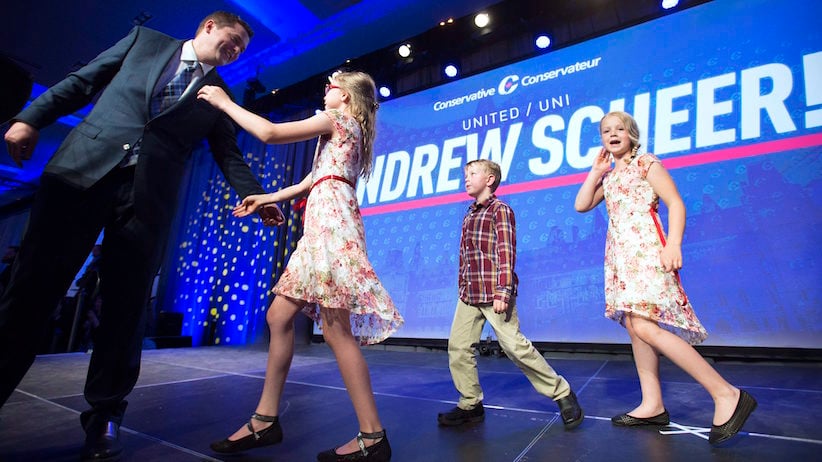 OTTAWA – Even before Conservatives began counting the ballots, the ruling Liberals set out to frame the new Opposition leader as a far-right extremist.

Only trouble was, the relentless barrage of email missives from Liberal headquarters in the days and hours leading up to Saturday’s vote were aimed largely at Maxime Bernier, the front-runner and presumed winner of the marathon Conservative leadership race.

Tory party members may have thought they’d nipped that strategy in the bud when, on the 13th and final ballot, they opted by the thinnest of margins for an ostensibly safer choice: the cherubic, genial, bland Andrew Scheer, former Speaker of the House of Commons.

But the outcome hasn’t substantially changed the governing party’s narrative.

Liberals had been salivating at the prospect of taking on Bernier in the 2019 election, an unabashed libertarian who would, they warned, dismantle universal health care, abandon Canadian farmers by scrapping supply management and slash government programs by over one third.

Someone, moreover, who had voted Yes to Quebec independence in the 1995 referendum and had been booted from Stephen Harper’s cabinet for leaving confidential cabinet documents at the home of a girlfriend with one-time connections to biker gangs.

Scheer does not present quite as tantalizing a target, Liberals privately admit. Unlike Bernier, he represents no radical change from the Harper era, he doesn’t challenge Conservative orthodoxy and he enjoys considerable caucus support, which should make it easier to unite the troops behind him.

Still, he’s not a moderate or a progressive in the vein of fifth-place finisher Michael Chong or A-listers like Peter MacKay and James Moore who didn’t run, any of whom the Liberals believe might have presented more problems for the governing party.

And Liberals believe they have plenty of ammunition against Scheer, starting with the fact that he owes his squeaker victory over Bernier largely to the support of social conservatives who want to re-open divisive debates about abortion and same-sex marriage.

Scheer, a social conservative himself, insists he wants to focus on the issues that unite Conservatives, not divide them. But Rodriguez predicted he won’t have much choice.

“He won because of the social conservative wing of the party so he will be under pressure to reopen those debates,” Rodriguez said.

And then there’s Scheer’s own record when it comes to abortion rights, gay rights or, most recently, a transgender rights bill.

“Make no mistake about it, this is somebody who has voted against every single civil rights advancement in the last 25 years,” said Toronto Liberal MP Adam Vaughan.

Worse, in Vaughan’s view, Scheer is now promoting a new brand of social conservatism with his promise to cut off funding to universities that fail to protect free speech by allowing student protests to shut down things like pro-life events or pro-Israel guest speakers.

“He’s somebody who wants to be in charge of the thought police,” Vaughan scoffed.

“Academic freedom and the ability for universities to self-govern are as fundamental to the function of democracy as just about every other component of the democratic system. You cannot have free and open debate if you’re being told who should talk and who shouldn’t talk.”

In addition to the social conservative wedge the Liberals intend to drive, they accuse Scheer of wanting to roll back the Trudeau government’s middle-class tax cut, reward the wealthiest one per cent and forsake any plan to combat climate change.

In one respect, they think Scheer’s narrow win over Bernier may have been a blessing in disguise, at least when it comes to Liberal fortunes in Quebec. While Bernier’s opposition to supply management cost him support in his home province, he likely would have fared better in Quebec in a general election than Scheer.

“It’s going to be a challenge for (Scheer) in Quebec,” said Rodriguez. “Nobody knows him.”

Moreover, he said Scheer is “so much to the right on social issues than where Quebecers are … Those discussions (on abortion and same-sex marriage) are in the past for us.”

There might be another bonus for the government in Scheer’s upset. As a former Speaker who repeatedly called for decorum in the Commons, he may be less inclined to obstruct the Liberal agenda, which the Conservatives have been doing almost non-stop since January.

“I hope they’re more constructive,” said Rodriguez, the Liberal whip. “They can’t be less than what they were, blocking, playing all kinds of games on a daily basis.”