Public Safety Minister Ralph Goodale says for the moment, it appears Canadian citizens or permanent residents will be treated as they always have been 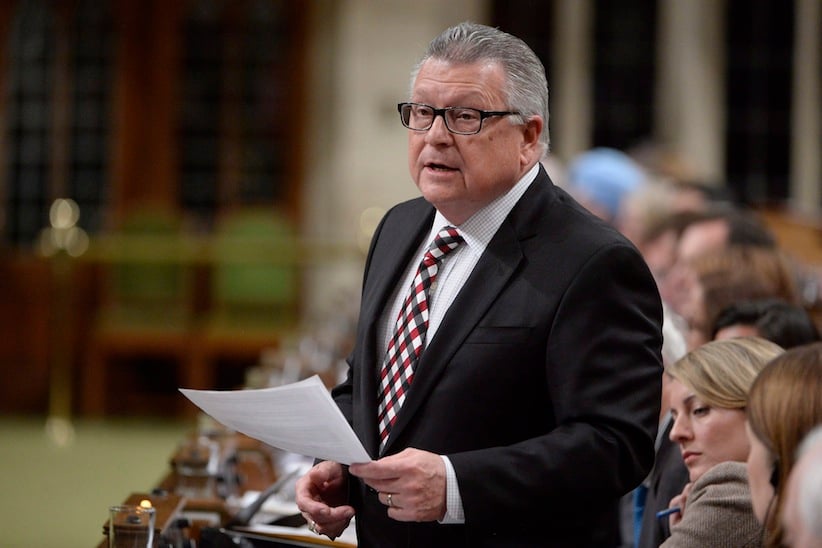 OTTAWA – A delay in implementation of the new iteration of U.S. President Donald Trump’s controversial immigration ban has bought Canadian officials some breathing room as they try to figure out whether anyone in Canada could be affected by new executive order unveiled Monday.

Public Safety Minister Ralph Goodale said the Canadian government will review the revised version to fully understand what’s at stake, but for the moment it appears Canadian citizens or permanent residents will be treated as they always have been.

“Obviously, this is a detailed matter with some careful nuances and we’re going to be looking at all of the details so that we can provide Canadians with complete information about everything they need to know,” he said.

The revised travel order leaves Iraq off the list of banned countries, but still affects would-be visitors and immigrants to the U.S. from Iran, Syria, Somalia, Sudan, Yemen and Libya who currently do not hold a valid U.S. visa. It also suspends the U.S. refugee program for 120 days, though refugees already formally scheduled for travel will be allowed entry. The revised order comes into effect on March 16.

Canadian officials were left scrambling in January by Trump’s original executive order, which came down late on a Friday afternoon and immediately threw global travel into chaos as border, airline, customs and other officials were unsure about how and to whom it exactly applied.

Among other things, many Canadian permanent residents who were holders of Nexus cards that are supposed to speed entry into the U.S. found themselves turned away, while some American visa holders in Canada feared being unable to return home.

The federal immigration minister implemented a temporary public policy to assist those who could have been stranded. Immigration, Refugees and Citizenship Canada said that since the policy came into effect on Jan. 31, it has received one request from someone looking to extend their in stay in Canada.

Also since January, hundreds of people have come to Canada from the U.S. to seek asylum since the original travel ban was implemented, a phenomenon now under careful scrutiny by Goodale and other federal departments.

The federal cabinet will discuss the issue Tuesday and cabinet ministers will also have the chance to grill U.S. Homeland Security Secretary John Kelly on those issues when he comes to Ottawa later this week for a meeting.

“We need to make sure we are sharing information and operating on the same fact base on both sides of the border,” Goodale said.

The original order sparked protests around the country and was ultimately blocked by U.S. federal courts, but some civil liberties associations said Monday the new one still doesn’t pass muster as the ban is in place for predominantly Muslim countries and as such, constitutes discrimination on the basis of religion.

NDP Leader Tom Mulcair called the revised travel ban “racist” and pushed Prime Minister Justin Trudeau to say whether he considers the U.S. is a safe country for refugees — a nod to the existing Canada-U.S. Safe Third Country agreement which governs asylum claims lodged at the border.

Trudeau did not directly answer the question, repeating instead his conviction that Canada remains open and welcoming to all.

That messaging, plus the travel ban and the Safe Third Country agreement have been cited as the reason in recent weeks that so many people have been crossing into Canada to lodge asylum claims.

The agreement says a refugee claimant must apply for asylum in whichever of the two countries they arrive first — unless they qualify for an exception — but since it only applies to those who cross at official border points, many are finding their way into Canada at unofficial ones.

Conservative MP Ted Falk, whose Provencher riding includes Emerson-Franklin, Man., where nearly 200 people have crossed illegally into Canada since the start of the year, accused asylum seekers of “jumping the queue” and taking advantage of Canada’s generosity.

“It appears as though some people have misunderstood (Trudeau) to mean, you know, come any way that you want — come legally, come illegally, it doesn’t matter,” he said.

Falk said the government should “close the loophole” that encourages people to essentially cross the border in fields and ditches instead of at official crossings.