The financial support program has been instrumental in major constitutional challenges, including the fight for same-sex marriage 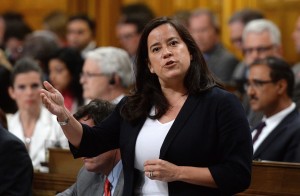 OTTAWA – The Liberal government is restoring and modernizing a program that gives financial support to those mounting expensive legal battles to clarify and protect their language and equality rights in court.

The reworked court challenges program is also expanding to include other sections of the Canadian Charter of Rights and Freedoms, including religion and freedom of expression, democratic participation and the right to life, liberty and security of the person.

It is also expanding its scope to include parts of the Official Languages Act, including communications and services to the public, proceedings of Parliament, language of work within federal jurisdiction and the promotion of both English and French.

“No matter how conscientious a government is when it proposes legislation, or how thoroughly a government studies a piece of legislation before it becomes law, there may still be unforeseen impacts on guaranteed rights,” federal Justice Minister Jody Wilson-Raybould said Tuesday in Ottawa.

The program was established in 1978 and has played an instrumental role in many major constitutional challenges, including the fight for same-sex marriage, before it was abolished by the previous Conservative government shortly after coming to power.

“Protecting against these unintended consequences and ensuring that more vulnerable groups within society have the means to challenge the legislation under the constitution and under the Official Languages Act is the right thing for government to do,” Wilson-Raybould said.

The court challenges program will receive $5 million in annual funding to support individuals and groups for developing and litigating test cases, as well as funding for legal interventions.

At least $1.5 million of that will be allocated for clarifying language rights.

As much as 20 per cent of the annual total could be spent on administrative costs, but an official said the government aims to reduce that amount in subsequent years as the program gets underway.

An independent body will now oversee the new version of the program, which the government says will help ensure that decisions over who gets funding — and who doesn’t — remain impartial.

Those interested in the job have until Mar. 6 to apply.

That independent body will also manage two separate panels of experts — one for official language rights and the other for human rights — also chosen through an “open, transparent and merit-based process.”

The new program is slated to be up and running by the fall.

Last fall, the House of Commons justice committee urged the Liberal government to go further, recommending the program become independent and enshrined in legislation to protect it from the whims of future governments.

Heritage Minister Melanie Joly did not rule that out as a possibility later down the road.

The Liberals promised to fully reinstate the program during the 2015 election, and then committed about $5 million in annual funding in last year’s federal budget.

FILED UNDER: Canadian Charter of Rights and Freedoms Jody Wilson-Raybould