'Little coalition' of Charest and Brown spar with Poilievre

Politics Insider for May 26: Unpacking the French CPC debate; concerns over Poilievre's campaign; and a threat to Quebec's secularism bill 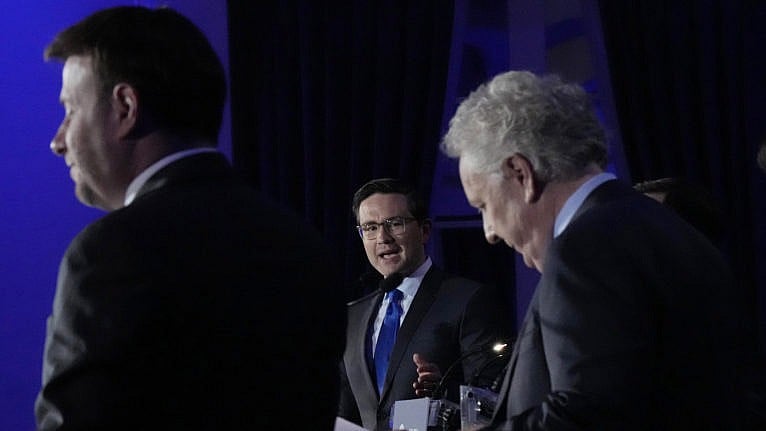 Last night’s CPC French debate in Laval was a three-way brawl, with Jean Charest and Patrick Brown tag-teaming Pierre Poilievre, who referred to them as a “little coalition,” the Post reports. The other candidates — Scott Aitchison, Roman Baber and Leslyn Lewis — said little, likely because they were unable to speak in French without reading notes. It was a raucous affair, with personal attacks and lots of noise from the crowd.

Audience members were asked to avoid clapping and cheering, otherwise the moderator would take time off of their candidate’s speaking time. But the crowd, who was favourable to both Charest and Poilievre, ignored the instruction and at times stole the show, chanting, clapping or even booing so loudly that moderator Marc-Olivier Fortin regularly paused the debate to ask them to quiet down.

Worried about Poilievre: In the Star, Susan Delacourt writes that Poilievre’s approach to the leadership race is taking a Trumpian tone, conspiratorial and disrespectful of democracy and the media.

I am, to be candid, worried that Poilievre won’t be able to stop himself from whipping up suspicion about why Conservatives have been losing elections — it being far easier to blame a rigged system than the party’s own internal problems.

Poilievre ahead: Abacus has a polling report showing Poilievre’s negatives are up, but he still appears to have a commanding lead in the race.

Coyne’s article is indeed libel. François Legault and Simon Jolin-Barrette should sue him and his daily newspaper for defamation and calculate a substantial amount of damages. The very announcement of the defamation will force the media (at least some of them), even English-speaking ones, to examine the facts, the articles of law, the distance that separates them from the crude assertion of the Globe. This will attract the attention of diplomats and the foreign press.

Paper tiger: Coyne’s colleague at the Globe, Konrad Yakabuski, writes that Bill 96 is a paper tiger, not a real threat to anglos, but complains that Legault “regards the English-speaking community as an inconvenience, rather than a historical partner with francophones in the province’s development.”

Moscow or Montreal? In Maclean’s, Alena Matushina, a recent immigrant to Quebec from Russia, writes that the law has made her feel more of an outsider, and makes her wonder whether she wants to stay.

I want to feel like I’m integrated, like I’m part of the system. I want to call it my home, and right now I can’t. Sometimes I consider going home to Moscow. Here, I just feel like I’m not good enough because I do not speak French.

Security fears: Justin Trudeau cancelled plans to appear in person at a Liberal fundraiser in Surrey, B.C. on Tuesday after RCMP warned a protest outside the event could escalate if he arrived, an unnamed source tells CP. In Saskatoon on Wednesday, where he was again beset by protesters, Trudeau expressed disgust at the “harassment, racist insults [and] threats of violence” targeting the mostly South Asian attendees as they arrived.

PR versus action: Canadian Forces members have told a former justice that the military sees sexual misconduct as a public relations problem that needs to be managed to avoid negative media coverage rather than a real issue, the Citizen reports. The Citizen learned about some of the evidence as the public waits for the release of Louise Arbour’s review of sexual misconduct in the ranks, which is expected May 30.

Lich free: An Ontario judge declined Wednesday to revoke the bail of Tamara Lich, the Citizen reports: “The courts are not a thought police,” Justice Kevin Phillips said. “We seek only to control conduct to the extent that certain behaviour will violate, or likely lead to violation of the law.” The Crown had argued that Lich breached bail conditions when she accepted the 2022 “George Jonas Freedom Award,” which she is set to receive in a June 16 gala in Toronto.

Bad game: CPC MPs have called for Canada Soccer to cancel a controversial exhibition game against Iran set for next month in Vancouver, CP reports.  The families of those who died aboard Flight PS752 — including 85 Canadians and permanent residents — plan to protest outside the stadium if the match goes ahead.

Fording ahead: A Leger poll for the Post shows Doug Ford headed to a second majority mandate at Queen’s Park. The PCs are at 38, the Liberals are down to 26 from 28 last week, while the NDP are up one to 24.

Rural time: In the Calgary Herald, Don Braid writes that as the UCP heads to a leadership, rural Albertans are fed up with the dominance of Calgary.

This could give an advantage to out-of-town leadership candidates, especially Brian Jean (Fort McMurray) and Finance Minister Travis Toews (Grande Prairie) if he decides to run. Similarly, the disparity might cause trouble for Calgarians who enter the race, perhaps including ministers Rajan Sawhney and Rebecca Schulz.

Won’t quit: The mayor of Surrey is so far refusing to step down in an escalating scandal involving an allegedly false claim that someone ran over his foot, the Surrey Now-Leader reports.