'Lock her up' chants directed at Notley 'disgusting' 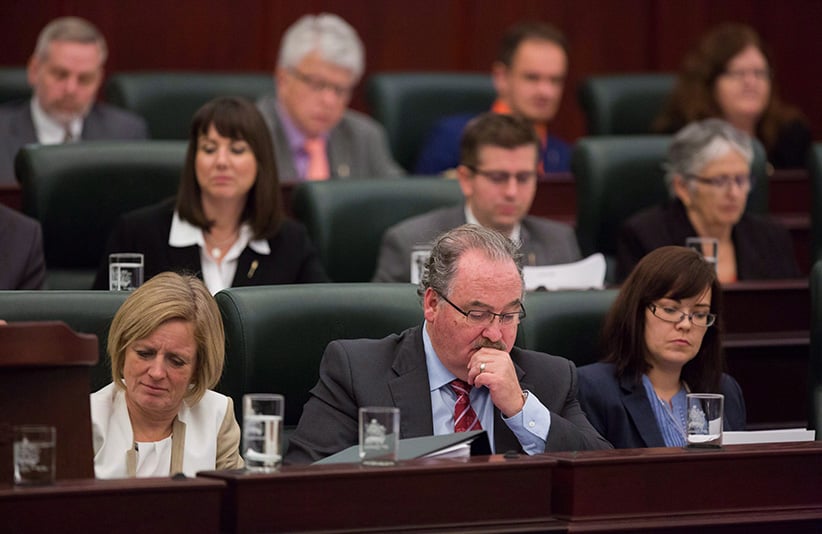 EDMONTON — Alberta’s government house leader says a rally that called for Premier Rachel Notley to be jailed is a disturbing sign of Trump-style politics coming to Canada.

“I think the Wildrose (party) in Alberta and their supporters are trying to channel Donald Trump, and I think that that’s disgusting,” Brian Mason said Monday.

“Albertans don’t want to see that kind of politics imported into our province, but it seems that Wildrose supporters are very keen to do just that.”

At one point, when federal Conservative leadership candidate Chris Alexander referred to Notley, the crowd began chanting: “Lock her up! Lock her up!”

It was a refrain often heard at president-elect Donald Trump’s campaign rallies when he accused opponent Hillary Clinton of destroying email evidence in a congressional investigation.

Jean also denounced the chant, as well as an anti-gay sign in the crowd.

“Our party and I denounce any type of homophobia or chants that are directed toward denigrating an elected leader in our province,” said Jean.

“It was completely inappropriate.”

Jean was one of many political figures, including Alexander and interim national Conservative leader Rona Ambrose, to call out the chanting.

The rally was organized by the conservative online outlet Rebel Media.

Another speaker was Bernard Hancock, better known as Bernard the Roughneck, who has been making public appearances about the impact of low oil prices and layoffs on families and workers in the oilpatch.

Hancock urged the crowd to find people to hack into Alberta’s computers to find information about the government.

“I know there’s a bunch of stuff they can dig up on what’s going on in that building,” Hancock told the crowd, pointing to the legislature building. “We need their help.”

Hancock was also an invitee and speaker at the recent Wildrose annual general meeting in Red Deer.

Jean said he doesn’t endorse Hancock’s hacking suggestion and wouldn’t speculate on Hancock’s role with the party and caucus in the future.

“Whether he has an opportunity to stand and introduce people in the future (for the Wildrose) is a question,” said Jean.

“As far as Bernard being part of our Wildrose, we invite all Albertans to participate.”

Ric McIver, interim leader for Alberta’s Progressive Conservatives, said he was invited to the rally, but was busy and didn’t make the trip. He didn’t agree with the “lock her up” comments either.

“What we don’t do here is arrest politicians and lock them up when we disagree with them. The whole concept of that is offensive,” said McIver.

Notley and other cabinet ministers have been the target of online attacks and threats since taking office in May 2015.

Calgary legislature member Sandra Jansen crossed the floor to the NDP last month after personal and online attacks she endured for her progressive views. She said they made her realize the Progressive Conservative party no longer represented her views.

Jansen said leaders, if they want to be leaders, need to address such attacks on the spot, not after the fact.

“You need to set an example by making sure that you say emphatically that those types of behaviours are unacceptable and you need to do it there,” said Jansen.

“If you’re not strong enough to stand in front of a group of people who are saying something you disagree with and tell them it’s wrong, then I think you have to question whether you’re cut out for a leadership role.”