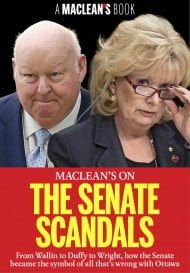 Sir George-Étienne Cartier, one of the Fathers of Confederation, saw the Senate as a place to counteract “the will of the mob.”

Given the mob’s opinion of the place these days, at best the Senate seems a relatively safe place to hide from it.

Four senators—the Liberal Mac Harb and a trio Stephen Harper appointed to the red chamber at the end of 2008, Patrick Brazeau, Pamela Wallin and Mike Duffy—have brought more discredit on the Senate from inside its pretty red walls than five generations of critics could manage from without. Yet each claims he or she was only following the rules when it came to travel and housing. That the rules, in their reading, generated jaw-dropping bills footed by the taxpayer was just bad luck.

A year into this mess, it’s just getting bigger. The Senate scandal has cost Stephen Harper his chief of staff and led to a string of RCMP interviews with potential witnesses in criminal cases. Maclean’s has been there for every development. For decades the Senate has seemed a sideshow in Ottawa. Suddenly it’s the main stage for a fascinating, if dispiriting, human drama.

You can read all about it in The Senate Scandals, a new ebook now live in Apple, Kobo and Amazon.

FILED UNDER: Back to Parliament Maclean's Politics Senate reform