Marching with Donna Ferrato: 'We are unbeatable'

Photographer, photojournalist and activist Donna Ferrato was behind the lens for Maclean's at the Women's March

Donna Ferrato, 67, is a photographer, photojournalist and activist who’s been documenting women for more than three decades. Her work, as she notes, focuses on “the stuff that really challenges women,” including domestic violence, reproductive rights, work and employment issues. Ferrato’s groundbreaking series on domestic violence resulted in her seminal book Living with the Enemy, in the early 1990s, and helped lead to the Violence Against Women Act. She’s photographed numerous protests over the course of her career, and she agreed to be behind the lens again for Maclean’s at the Women’s March on Washington on Jan. 21, 2017.

Why did you want to be here today?

I’m here today for the march! I’m here today to be part of this historic, incredibly exciting experience with a million, a million people who’ve come here today to say, “We won’t go back. We won’t put up with this. You’re not our president, Trump.” [Note: There is no official count of the Women’s March on Washington, but estimates range from 500,000 to 750,000. Across the U.S., estimates suggest well over one million people participated in hundreds of sister marches.]

Today has been a very emotional experience for me. I’m just so excited to see everybody out there, marching, having fun, being together, bringing their kids. Grandmas here with their children, with their signs. Really being proud to be female but angry that they put a man like this in power over us, to make decisions about our lives, someone who doesn’t care at all. I’m just really proud to be here, and I feel pretty excited by it. Thrilled.

MORE: Why they marched: A Donna Ferrato photo essay

You’ve seen a lot in your career, you’ve been through a lot. How does this event compare, as a moment in history?

I think this march, today, is very much like the protest marches we had back in the late ’60s against the Vietnam War. In terms of the numbers, in terms of the feeling of love here. The people are really united, and everybody’s together. But as you can see they have an opinion. They have voices. They want to be heard. It was the same as the Vietnam War. And those were extraordinary days. A lot of people died, a lot of valuable people died. And I know that we’re going to have to face that. Because no revolution comes cheaply, without the loss of life.

What do you think about this march as perhaps an instigator for more that’s to come? I’ve seen signs that say, “Nice march. What next?” 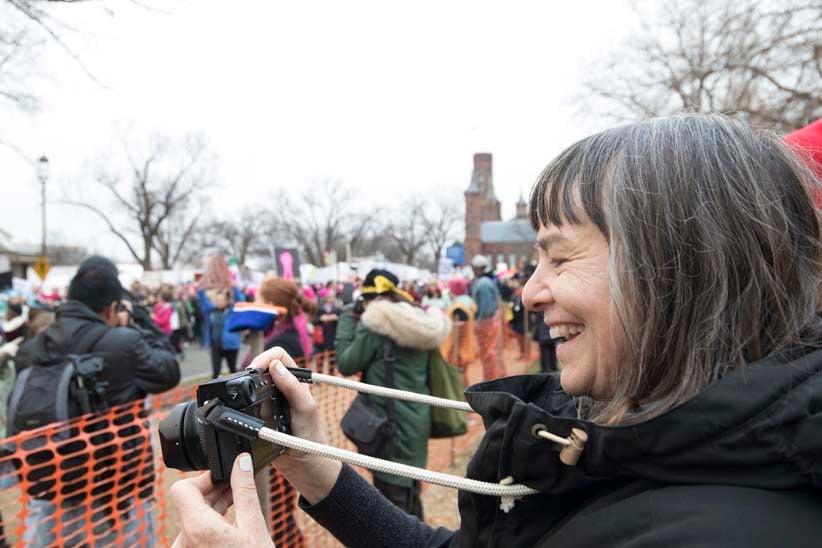 Being a photographer, like you are, someone who’s captured moments in people’s lives and the spirits of people: Is it that much more important to you to be here taking photographs, as opposed to simply participating?

You know, for me, participating is taking pictures. I participate that way, actively, by throwing myself into the crowds and taking pictures, and talking to them, and hugging them, and loving them. I love people. We’re all hurting. We’re all in this together. Taking pictures: It’s like breathing, to me. If I was walking down the street without my camera, I’d be kicking myself because I’d be missing so many extraordinary [the crowd around her breaks into a cheer] — Ya! Ya! Joy! Joy! The energy here. Somehow we have to capture it! These pictures will show people for all time that the’re s a huge resistance wave coming at Pence and Trump and all of these liars in Washington, DC. It’s all going to change. They’re not going to get away with it.

RELATED: How Donald Trump will save the left

We’re used, by now, to seeing signs that say things like, “I can’t believe I still have to march for this.” What’s it like to still be fighting for women’s rights and respect?

I love being 67. Think of what someone like me has been through. It’s exciting to get older, and to go through all these upheavals. Times of calm, and then we come back stronger. And then they try to put us down more. But the older ones have kept doing this.

And you’re not exhausted? Or disheartened?

You know, democracy is a very precious thing. And when you don’t keep your mind on it and keep fighting for it, and doing something to protect it, you lose it. So I’ve been photographing abortion centres, protests against women getting abortions, battered-women’s shelters, women fighting for justice, all my life. Every single year, for 35 years. I know the price of democracy. I know how precious it all is. And how we can lose it so fast.