Maxime Bernier has bet the house on his narrow idea of Canadian values. He may be in for a nasty surprise

Jen Gerson: There are no special rights for people whose families have been here longer, or have white skin. Every citizen has a say when it comes to shared values—and a vote at election time 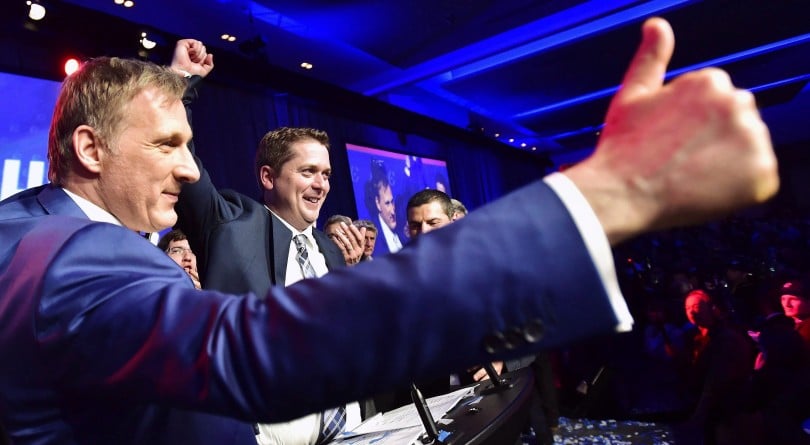 Bernier, left, congratulating Scheer after Scheer is elected leader in May 2017. THE CANADIAN PRESS/Frank Gunn

It speaks to just how shallow and affected my cynicism actually is that I never thought I would have to write this column. But if Maxime Bernier is going to try to ride the great global alt-right wave by spewing nativist rhetoric, complaining about “more diversity,” and raising the spectre of a breakdown of social cohesion if we let too many (cough-non-white-cough) immigrants into the country, well, I think there are some pretty obvious points that need to be re-stated.

Firstly, it’s absolutely fair to talk about issues like social cohesion and shared Canadian values, although the medium and the intent of the messenger count almost as much as the message.

But Twitter is not exactly the best arena in which to conduct thoughtful, compassionate and nuanced discussions about these issues. It’s more than a little irresponsible for an MP to go on a Twitter tirade—as Bernier did almost two weeks ago—talking vaguely about shared Canadian values, while signalling much more specifically the minority groups he seems to believe doesn’t share them. For the life of me, I have no idea what is so terribly offensive to Bernier about naming a park in Winnipeg after Muhammad Ali Jinnah, the founder of the modern state of Pakistan. While Jinnah’s legacy can be debated, I imagine the residents of Winnipeg gather there to kick balls and hold BBQs just the same. Canada doesn’t exactly lack for parks.

And it’s gallingly disingenuous for Bernier to suddenly signal his concern for women’s rights, for example, only when they become a convenient cudgel to wield against that specific group.

This is the same MP who posted a “red pill” meme from the Matrix on Twitter, and then claimed he didn’t know that “red pill” is a widely understood term used by online anti-feminist men’s rights activists. His feminist credentials are wanting.

But what bothers me most about all of this is the un-tweeted assumption that it’s white Canadians who are the standard bearers and chosen spokespeople for Canadian values. The values themselves are treated like unyielding, unchanging things, passed down like an inheritance from the white forefathers who stole, bartered for and tamed the land into agricultural submission in order to build this prosperous, modern nation.

A fairly narrow, and self-selective understanding of both history and of the values themselves is required to buy into this idea.

(And, I would ask my fellow Canadians who burn too easily in the sun, have these values remained unchanged since the dawn of the federation? Have we not moved others and, ourselves, been moved?)

The tenets of Western Civilization don’t belong to a single ethnicity or race. They are a shared inheritance, freely offered to all people who choose to adopt them—and, historically, often imposed by bayonet on many who did not.

Social cohesion is an important thing, though it is difficult to quantify or define. But by what few measures we have, Canada has quite a lot of it. Immigrants are not only net contributors to our economy, they are vitally important to our continued prosperity and growth. By most accounts of social science, immigrants tend to integrate very well into the Canadian body politic, though we could always be better at helping them to do so.

It’s also fair to suggest that we, as a nation, should hold paramount some inalienable virtues; a respect for human rights, for example. We understand the value of education. We are trending toward a greater delineation between church and state, but still think that citizens should be free to worship as they choose. We respect the rule of law; freedom of speech and assembly; the ability of men and women to live their lives as they choose unhindered by the state—as long as they don’t harm or neglect others.

RELATED: Why the explosive debate over asylum seekers could define the next federal election

These would be the sorts of values that would make my list, at least.

But people who look like Maxime Bernier are not the only ones who get a say in what constitutes our universal values. There is no generational litmus test one has to pass in order to have a vote, or a say. A citizen is a citizen. No special rights are conferred on people whose families have been here longer, or have white skin, and anyone who thinks otherwise needs to consider just how thin their understanding of Canadian values really is.

Conservatives like Bernier might want to be a little more cautious before they proclaim themselves as society’s sole heirs and champions of Western civilization.

Defending freedom of speech is easy. Conservatives in this country seem to struggle a little more when it comes to the right to protest.

And many Canadians might add a few other values to the list; a strong and robust welfare state, for example. Environmental stewardship, perhaps. Reproductive rights. They might even place a high worth on multiculturalism: The ideal that many people of different backgrounds and ethnicities can live here, together, in comparative harmony, free from war and hardship, joining together to create a nation of shared prosperity.

That vision is not free of all disagreement or strife. We will disagree. But if that’s a vision we can share, it seems like a good place to start.

Bernier’s defection from the Conservative Party on Thursday laid bare the tension that has been long festering within that party; the one that sits between the values that they hold, and what they believe will make them unelectable to a centre-left electorate.

RELATED: Andrew Scheer needs to tell Maxime Bernier: put up, shut up, or get out

That is not an easy line to walk, and if Bernier could not serve his “conservative” conscience in the Conservative party, then he was right to leave it.

But I am not so sure that Bernier really understands what makes Canada strong. Nor do I think that his understanding of our shared values is so widely held.

Is a woman of Pakistani descent who peacefully submits to arrest at the Trans Mountain pipeline protest in Burnaby, for example, somehow less of an embodiment of Canadian values than Maxime Bernier?