A personalized Conservative fundraising campaign from 2009 makes a comeback 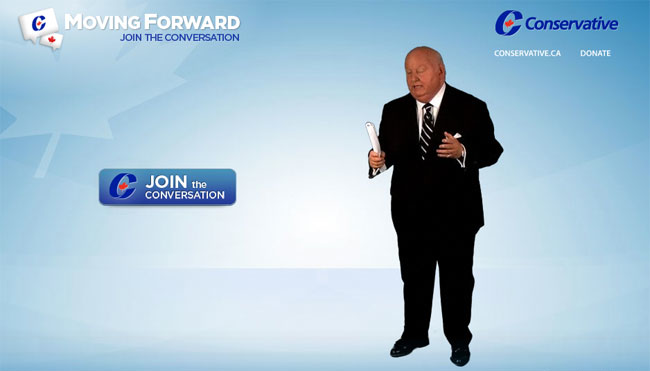 The political world chuckled this afternoon at Sen. Mike Duffy’s expense. Tweets galore pointed to a website that featured videos of the senator, in a past life as a Tory fundraiser, mouthing dozens of names of potential Canadian party donors. After Duffy’s warm greetings, the video would shift to his fundraising pitch. You might remember the campaign. Scott Feschuk poked fun at the videos in 2009. Today’s amusing creation was the work of Kevin O’Donnell, the Green Party of Ontario’s deputy leader and candidate in Ottawa Centre. A programmer by trade, O’Donnell explained to Maclean’s why and how he sparked a brief Twitter frenzy. Warning: the language is sometimes technical, as you might expect. (UPDATE: The project has taken off. Check out the proof below.)

Maclean’s: What exactly have you created?

O’Donnell: A beast, apparently. It’s really nothing except pulling together all of the individual “name” videos that appear at the start of the fundraising video. They are separate, so after mild sleuthing of how the fundraiser worked, I was able to pull them all out.

Why did you create it?

The short answer is: because it amused me. The long answer is I’m a computer programmer and just about everything I know about my trade was learned by digging through how other people have done their work and learning from it. So I dug into how they did the ‘name’ videos. Of course, once that was solved, the idea of putting them all on the Internet was too funny to not do.

And which fundraising video are these from?

They are from a [Conservative Party] fundraiser from a few years ago. Glen McGregor noticed the Duffy version was still online and blogged it this morning.

How did you throw this together, though? What did that require?

The sleuthing showed the ‘name’ videos were predictably located at this link. Then I just googled for any list of first names and picked one that had about 3,500 in it. Running a downloader in a loop yielded 750 successful matches. I added an open source Flash video player on to the page and that was it. There might be more names available. For example, “mohammed” was not originally there but someone asked about it. I checked it manually. It was there. Perhaps more are.

You’re a politician with some coding skills, are you?

I’m learning both crafts on the job, yes.

You’ve added Mohammed. And you’ve posted an “easter egg” beside a certain name, in response to a tweet (see: Nigel). Are you taking requests?

I wasn’t — but before answering this question I added a “request” form. So yes, taking requests.

Where else on the internet have your coding and politics collided?

Obviously I do programming internally for the Greens to support Mike Schreiner in Guelph, as well as the federal party. I also created a municipal site, OttWatch.ca, to make it easier to find information about the City of Ottawa.