Mike Duffy talked for a living. On Monday, he spoke six words. 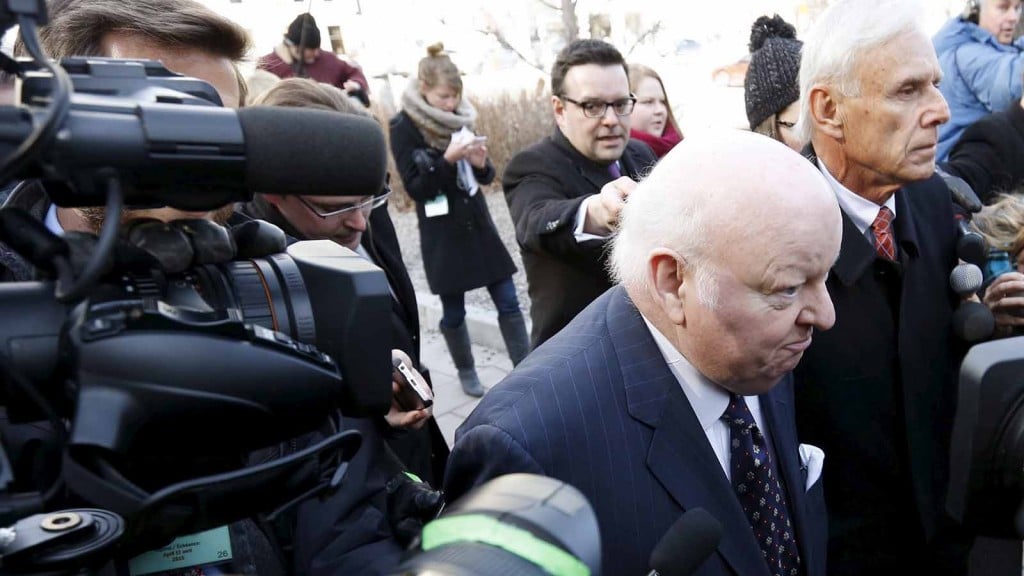 For all the latest on the Mike Duffy trial, follow our hub page for reporting and analysis. Here, Nicholas Köhler—Maclean’s man in the courtroom—will log his dispatches. This is his first.

Before we get into the arresting claims of puppy-buying trips to Peterborough made on the public dime.

Before we get to talking about Nigel Wright’s evidently colourful way of labelling scandal—”our public agony,” “our Chinese water torture,” “our public bleeding.”

Before that image the Crown planted in our brains of the senator from Prince Edward Island pumping on the pedals of a stationary bike.

Before any of that, let’s start at the beginning, and deal with the way Sen. Mike Duffy’s trial began—with a 15-minute recital of 31 oddly lifeless criminal offences, from breach of trust to bribery to fraud, read out in the midst of court, that odd ritual called arraignment.

For Duffy, who rose to his feet with difficulty, it was a test of endurance. He approached the bench like a turtle stooped, bent by his own shell—bald, with great fleshy earlobes—and he stood with that strange mix of defiance and deference that, when it comes to Duffy, makes you think of a young king’s least-favourite eunuch.

He swayed as the clerk read the counts—she read as though she’d been practising—and he collected himself there as though steadying himself against a brisk wind. He looked frail, his pink head a collection of glassy domes bolted together, and he began to bend at the knee as the clerk droned on, alleviating the mounting pressure.

It was an heroic act, all that time up on his feet, and, at the end of it, he took his reward: “I am not guilty, your honour,” he told the room. It was the only time he’d speak all day.

For a man whose success has over the years depended so much on his voice and how, by way of his famous “Duffy downlook,” he rationed it with his eyes, Duffy looked uncomfortable with the notion of saying just that and sitting down.

So he should have been uneasy, given his case, which is complex, and leans on our accepting the notion that the Senate is a world unto itself, jargon-filled and free of gravity.

Holmes predicted that the case, which turns in part on whether Duffy properly claimed expenses related to his home in Ottawa, where he’s lived for years despite his being appointed a senator from Prince Edward Island, would give rise to “spirited debate” about what constitutes “primary residency.”

Holmes appeared to leave no room for a defence that might transform the idea of what it means to live in a house into a metaphysical problem, prone to ethereal deconstruction, like how many Mike Dennis Duffys you could balance on top an invisible chimney in P.E.I.

He noted that the Duffy cottage, located at 10 Friendly Lane in Cavendish, P.E.I., and designated by the senator as his primary residence, does not enjoy year-round garbage collection and doesn’t get its roads ploughed in winter. Even the local RCMP detachment doesn’t stick around for the winter.

Holmes appealed to the press, laying out a series of juicy anecdotes about Duffy’s expense claims. Holmes said he and his wife, Heather, drove up to Peterborough, Ont., to see one-time Tory MP Dean Del Mastro on the public dime, although really the purpose of the trip was to see a dog show and select a puppy to take home (something the other side refutes). Holmes said a guy Duffy hired to do senatorial research, and whom he paid through a private company Duffy allegedly used to skirt financial oversight, was actually his personal trainer (hence that image of the stationary bike).

Related: A rough guide to the charges against Mike Duffy

During his opening arguments, Bayne seemed to extend his hand out to the judge, Justice Charles Vaillancourt, as if to say: Come, let us explore together an esoteric world where up is down and down is up, where the tiles on the floor turn to birds, and where the “Crown’s colloquial understanding of common sense” holds no sway.

This is the world of the Senate of Canada.

In this world, everything is permitted, because nothing is true: There are no clear rules to judge Duffy’s actions, and Bayne contends it’s not Vaillancourt’s job to find clarity where none exists, nor to untangle the undoable knot. “Sen. Duffy is not to blame if they are found lacking,” Bayne said of the rules, repeating again and again that, in this way, Duffy is no different than his colleague senators.

He presented the court with a compendium of senatorial rules, saying: “It’s not a book of common sense, but it is a book that governs the Senate.”

Bayne’s statements about Wright, the former chief of staff to Prime Minister Stephen Harper, who cut the $90,172 cheque for Duffy, electrified Ottawa’s Courtroom 33—a moment that made a bit of a joke out of Bayne’s earlier complaint that Holmes was stooping to generate headlines in his remarks about puppies and bikes and yacht club lunches.

Bayne said the evidence—including several phone-book-sized compendiums of internal emails Bayne took some pleasure in dropping on his lectern for the thud it made—would show that Wright had participated, along with several others in the PMO (“this small group,” Wright apparently called it), in a conspiracy to force Duffy to accept the $90,172. “Seldom has an extorted person been called an equal partner,” said Bayne, countering the Crown’s suggestion that Duffy had sought the money out.

Wright adopted the strategy to put an end to what, in those emails, he called “our public agony,” or “our Chinese water torture,” or “our public bleeding”—the political scandal that arrived when newspapers began reporting on Duffy’s questionable expense claims in late 2012.

And Bayne said, quoting from an interview of Wright conducted by the RCMP—complete with theatrical, suspense-laden ums and ahs—that Wright had gone to Harper to brief him on the strategy to contain the political crisis, and to make sure the PM was comfortable with it.

Related: A Duffy timeline: Where he went and why

Duffy, for his part, had looked crushed while Holmes spoke, but he perked up when Bayne, a silver-haired man with a flair for waving documents in the air, told a couple of jokes at the suspended senator’s expense: A makeup woman Duffy hired in the course of his senatorial duties, so that he could expense the cost, had not been hired to do his hair (he has none). A man the Crown contends was his personal trainer should really give Duffy’s money back (Duffy, Bayne said, “is not a picture of overwhelming fitness”).

When Duffy arrived at the Ottawa courthouse this morning, he was met with a circus-style media scrum. At one point, he tried to stop the crowd of journalists, and appeared ready to let them assemble their cameras in a phalanx before him—perhaps so he could make a short announcement, and speak.

Bayne stopped him, saying everything they had to say would be said in court. At the end of the day, when Duffy again arrived to walk that long gauntlet of media—down the courthouse stairs and out into the open maw of that waiting scrum outside—he pursed his lips and steeled himself.

He’d still be unable to talk. Talking had been his industry. These used to be his people.