Question of day 2: What is 'constitutional residency' — and what does it mean? 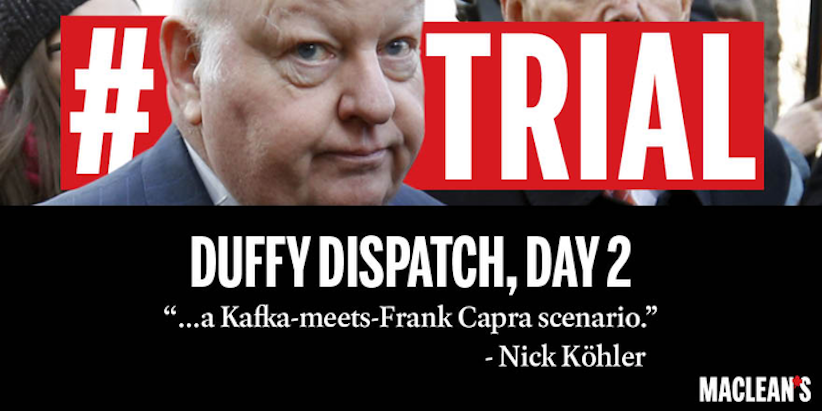 Mark Audcent, who retired as law clerk to the Senate last year, is a man of indeterminate age—likely somewhere in his mid-to-late 60s, maybe older—but his comportment and his area of expertise speak very definitely of times past, or at least of his years in the changeless, stony atmosphere of Parliament’s Centre Block.

At one point, while delivering testimony today in Ottawa’s Courtroom 33, where Sen. Mike Duffy is on trial for fraud, bribery and breach of trust, Audcent spoke of the days when senators traveled to Ottawa by buggy and rail, and at another time referred to “common socage”—arcane language once contained in our Constitution referring to feudal land tenure.

There’s something genteel about Audcent and about the soft R’s of his speech, and his height and rambling gait make you think of Ray Bolger outside his scarecrow makeup in The Wizard of Oz.

Therefore it was strange to consider that Audcent was the man who, by way of his role in an orientation meeting for the new senator in 2008, initiated Duffy into the world that would be his undoing—a world of “constitutional residency,” primary and secondary abodes, of disqualifications and vacancies.

“It was,” as Audcent put it today of his chat with Duffy, “a stick-and-cabbage show.”

Don’t let that slip into folksiness fool you. Audcent is a mandarin, and in some ways the light he brought to today’s proceedings contained a contradictory force, serving to obscure rather than illuminate the issues.

This was to the benefit of Duffy’s side of the room, and it was in large part due to the efforts of Duffy’s lawyer, Donald Bayne.

Even Audcent at times seemed surprised by how thorny the issue of where Duffy lived became under Bayne’s cross-examination. Here lies a central question of this case: Duffy, a longtime Ottawa resident, became an instant out-of-towner once Prime Minister Stephen Harper made him a senator for Prince Edward Island, so goes defence lawyer Donald Bayne’s argument.

The magic of that designation meant Duffy therefore enjoyed “travel status” while in the national capital region—Ottawa, to you and me—and he could bill the taxpayer accordingly.

On this Bayne scored many points today, and Duffy looked cheered at the end of one block of questioning, rising for a break with a grin on his face to shake hands and whisper with his lawyer.

And it was a damaging day for Crown prosecutor Mark Holmes, though it is too early to make much of this, on the second day of a scheduled 41-day trial, and on just the first day of witness testimony.

The two opposing lawyers wrestled with each other a good deal through it all, taking turns calling Justice Charles Vaillancourt’s attention to the other’s obtuseness, nearly riling the judge, who is a stickler for doing these right. At bottom their argument was which standard Duffy ought to be measured by—the Senate rules (and in Holmes’s view the dictates of common sense) or the world of actual practice—the world as it is, or the world as it ought to be.

Bayne’s line of questioning cast Duffy, a veteran newscaster and Ottawa-watcher whose desire for a Senate appointment has long been acknowledged—“every time he shakes my hand he takes my pulse,” one senator once said of him—in the improbable mould of a naif.

This a Kafka-meets-Frank Capra scenario, such that rookie Sen. Mike Dennis Duffy bounded Mr. Smith Goes to Washington-style into Canada’s capital, only to find he was Joseph K., subject to the absurd, widely misunderstood, oddly lucrative rules governing per diems and travel expenses for out-of-province senators.

And what if Audcent had found that one of the senators, all of whom enjoy a solicitor-client relationship with the former law clerk, wasn’t qualified for the job? “I view my role as a resource,” he told the court, “I never viewed my role as that of a policeman.”

On one question, in particular, the Senate needed that policeman.

Related reading: The long shadow of the Senator of Cavendish (Wherry)

Crown and defence batted around all day the notion of “constitutional residency” and what it means. For Holmes it is where you hang your hat. For Bayne it is a bureaucratic designation capable of transforming a human being into an administrative entity, one evidently equipped with a nozzle into which the government screws a money hose.

This is not perhaps the world as Bayne would like it to be—that’s not the issue for him. The issue is rather what constitutional residence means in practice in the Senate.

And what does it mean? So strange an idea had Bayne made it—without clear Senate rules, he pointed out, or clear criteria—that Audcent looked at him and remarked, following the logic of his questions: “One could get the feeling you could be a resident of a place you’ve never been.”

More on our courtroom correspondent: