Moving on from SNC-Lavalin, Liberal-style

Politics Insider for April 10: Philpott claims expulsion breached rights, the PM defends his libel threat, and what Quebec and Alberta have in common 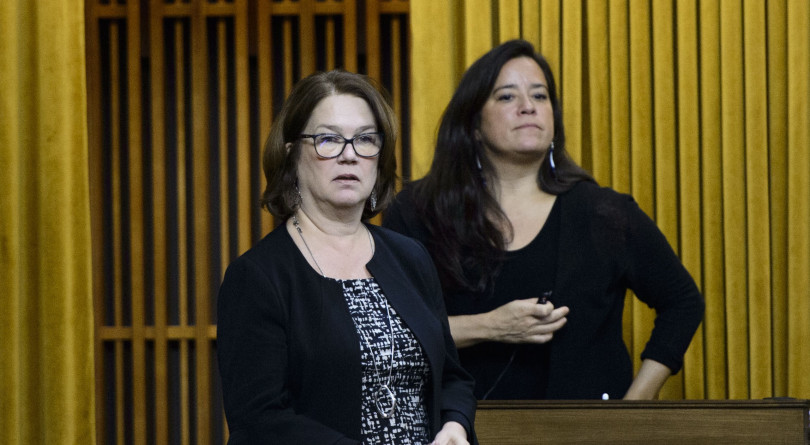 Independent MPs Jane Philpott and Jody Wilson-Raybould vote in the House of Commons on Parliament Hill in Ottawa on Tuesday, April 9, 2019. (Sean Kilpatrick/CP)

Welcome to a sneak peek of the Maclean’s Politics Insider newsletter. Sign-up at here.

A week after Prime Minister Justin Trudeau kicked former cabinet ministers Jane Philpott and Jody Wilson-Raybould out of the Liberal caucus, Trudeau found himself once again locked in a battle of “she said, he said“.

Specifically, Philpott says Trudeau acted unlawfully when he “unilaterally” ejected the two MPs from caucus, while Trudeau says his caucus made it clear to him they wanted the two women gone: “I can reassure everyone and say very clearly both to Dr. Philpott and Ms. Wilson-Raybould that I consulted extensively with caucus over the preceding weeks, in the day before, and the day of, I talked with all caucus regional chairs and …they wanted the two individuals removed from caucus.” (Toronto Star)

Earlier in the day Philpott, now sitting as an independent MP, rose in the House on a question of privilege and said her and Wilson-Raybould’s rights as MPs had been breached by the expulsion. Whether that’s true or not comes down to arcane rules adopted in 2015 meant to make clear whether the authority to boot MPs out of a caucus lies with the caucus itself, or with the prime minister. The National Post‘s Chris Selley has a helpful rundown on the history and implications of those rule changes, which were part of Conservative back-bencher Michael Chong‘s Parliamentary Reform Act, but the Coles Notes version: the rules required a series of recorded votes by each party’s caucus on the matter, and there’s no evidence the newly-elected Liberals did so in 2015. Hence Philpott’s claim that Trudeau technically contravened the law. (National Post)

So needy: On cue, Liberals went after Philpott. Tourism Minister Melanie Joly said her former colleague suffers from “a need for attention. … I think we’re moving on and I think my colleagues need to move on, too.” (Canadian Press)

That’ll show him: Of course moving on from the SNC-Lavalin controversy would have been a lot easier if Trudeau hadn’t threatened to sue Conservative leader Andrew Scheer for libel, thereby creating a whole new cycle of Trudeau-SNC headlines this week. On Tuesday Trudeau found himself defending his libel notice, which claimed Scheer defamed Trudeau by saying the Prime Minister “led a campaign to politically interfere in SNC-Lavalin’s criminal prosecution.” Trudeau told reporters his libel notice is meant to show “there are consequences short-term and long-term when politicians choose to twist the truth and distort reality for Canadians. It’s not something we’re going to put up with.” (CTV News)

Scheer’s response: “I’m still waiting for him to act.”

Trudeau’s libel threat was as painful as it was predictable, writes Andrew MacDougall, and it shows how no one in the Prime Minister’s office is able to think clearly. (Included: bonus advice for Liberals on how to actually move on from SNC-Lavalin.):

Because—and despite all outward appearances—there is still time and the Prime Minister is not without his powers. The entire resource of government is there to be deployed at his command.

As for Philpott, she still has supporters in her former party. Most of the board members of the Liberal riding association in Markham-Stouffville resigned in solidarity with Philpott on Monday. The outgoing board secretary told CBC News she still plans to support Trudeau in the next election, but that her resignation is “strictly about Jane Philpott. … The heart has gone out of it. I feel like we are collateral damage in this whole affair.” (CBC News)

Taxpayer doh!: With populist politicians everywhere attacking the Liberals’ carbon tax plan as an elitist cash grab that hurts consumers, there might have been a better way to sell its merits than having Environment Minister Catherine McKenna fork over $12 million to self-confessed bread price fixer Loblaw Companies to buy low-emission fridges. Outrage from the Monday announcement is rising on social media around the hashtag #LoblawsGiveItBack (Huffington Post)

That’s a wrap: As a boy in 1965 Rob Nicholson met former prime minister John Diefenbaker* and told The Chief he wanted to one day be an MP. Today, after 24 years in office, Nicholson is the longest serving Conservative MP, but this is his last tour of duty. Nicholson, 66, announced Tuesday he won’t be running for re-election in October. (Niagara Falls Review)

Vive L’Alberta Libre: With less than a week to go before Albertans go to the polls, United Conservative Party Leader Jason Kenney, who seems certain to win, has kept up his demands for greater independence for his province. But if Kenney’s go-it-alone message sounds familiar, that’s because he borrowed them straight from Quebec, writes Jason Markusoff:

At the same time as he nurses Alberta’s traditional grudge against Quebec, Kenney has signalled that, as premier, he’d draw inspiration from Quebec’s political obstinacy. “I think we can learn a few things from our Quebec friends, how they’ve been so effective, dominating the politics of the federation over several decades,” he told a United Conservative Party (UCP) rally in March, a few days into the campaign. “You know, I respect them. They fought for themselves. And it’s time that we had leadership that fought for Alberta.” The Calgary hotel crowd gave some of the evening’s greatest roars of approval. (Maclean’s)

CORRECTION, April 10, 2019: An earlier version of this post incorrectly stated that Diefenbaker was prime minister in 1965.