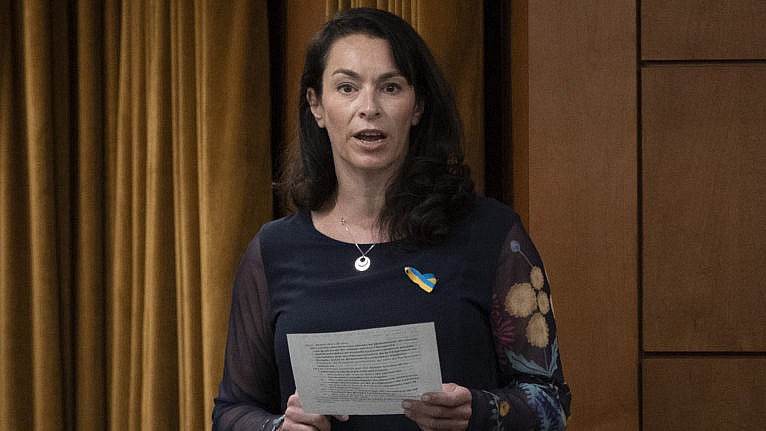 The motion, moved by NDP MP Heather McPherson, is non-binding and does not require the Canadian government to take any action. It says that the killing of Ukrainian civilians, the desecration of corpses, the forcible transfer of Ukrainian children to Russian territory and the torture and rape being perpetrated by Russian soldiers constitute genocide. McPherson said she introduced the motion as a way to push the Liberal government to take stronger actions against Russia.

Back to Kyiv? Melanie Joly said Wednesday that Canada’s embassy in Ukraine could reopen within days or weeks, Global reports: “We’re looking at several scenarios.”

Tories up: The CPC has opened up a “statistically significant” lead over the Liberals, the latest Nanos Research poll for CTV shows.

As of April 22, the CPC was up 4.3 percentage points over four weeks to 35.6 per cent, overtaking the Liberals, who were down 2.2 percentage points to 30 per cent. The NDP lost two points to 19.6 per cent. “But the key takeaway here is that the Conservatives are opening up a lead that is statistically significant,” pollster Nik Nanos said. “It’s outside of the margin of error.”

Justin Trudeau, François Legault and the CEO of Moderna, Stéphane Bancel, are to make the announcement in Montreal on Friday, the first time the two politicians have shared a stage since the federal election.

Committee coming: The Liberals will create a special all-party, security-cleared committee to review documents related to the firing of two scientists from the national microbiology laboratory, even if the Conservatives continue to rebuff the plan, CTV reports. Government House leader Mark Holland said Wednesday the NDP has agreed, and he hopes the Tories and Bloc Quebecois will also. MPs will be able to see unredacted documents, but an independent panel of three former judges will have final say on what can be made public.

Lewis countersues: CPC leadership candidate Leslyn Lewis is accusing a former campaign manager of misappropriating resources, deliberately badmouthing her and using her 2020 leadership run to further his own interests, rather than hers, the Star reports. The allegations are contained in a statement of defence and counterclaim filed by Lewis in response to a lawsuit veteran Conservative campaigner John Mykytyshyn filed last month.

Statistics Canada says 22 per cent of us are between the ages of 55 and 64, on the cusp of retirement — the highest proportion ever. For every 100 people in that age group, there were just 81 people aged 15 to 24, gearing up to take their places in the workforce. Through immigration, Canada has managed to slow the aging of its workforce more than many other countries, but that won’t last, Statistics Canada says. Nothing can stop us from getting older en masse.

In the Globe, John Ibbitson has some ideas for how we can adapt.

The problem is sharpest in Atlantic Canada. Sarah Smellie, of CP, has a good explainer on what that demographic pressure means for that part of the country.

CPC writes: The Conservatives are asking the RCMP Commissioner to reopen an investigation into whether Justin Trudeau violated the Criminal Code over his family’s 2016 trip to the Aga Khan’s private island, the Globe reports.

Conservative ethics critic James Bezan wrote a letter to Commissioner Brenda Lucki on Wednesday requesting a new RCMP inquiry after Mr. Trudeau told the House of Commons on Tuesday that he did not give himself permission to accept the all-expenses-paid gift from the Ismaili Muslim leader.

“Mr. Trudeau admitted that he did not have the consent in writing of the head of his branch of government to accept this valuable gift,” Mr. Bezan wrote. “In my respectful view, Mr. Trudeau’s answer … requires the national police force to reopen the matter and begin a criminal investigation immediately.”

RCMP documents outlining the force’s 2019 inquiry show the Mounties believed there were reasonable grounds to charge Mr. Trudeau with fraud for accepting the $215,000 vacation from the Aga Khan, who had significant business dealings with the Canadian government.

Brian Lilley, writing in the Toronto Sun, believes the decision not to charge Trudeau reflects badly on the RCMP.

Libs vs. Meta: Heritage Minister Pablo Rodriguez is hitting back at Meta after the company did not rule out banning Canadians from viewing and sharing news on the social network, CP reports. The Liberals introduced a bill earlier this month that would force digital giants to compensate news outlets for reusing their work, modelled on a law in Australia, where Facebook introduced a temporary ban on news on its site in protest. “They made the same threat in Australia and at the end of the day they stayed,” Rodriguez said Wednesday.

Lich honoured: Tamara Lich has been awarded The George Jonas Freedom Award for her part in organizing the Freedom Convoy truckers protest that drew international attention for occupying Ottawa’s downtown core in February, the Post reports.  Rex Murphy will be the keynote speaker when the award is presented. For leading the convoy, Lich was charged on Feb. 17 with mischief, counselling mischief, intimidation, counselling intimidation, counselling obstruction of police and obstructing police. The allegations have not been proven in court.

Police ready: The Ottawa police services board has approved the appointment of up to 831 RCMP officers to help municipal police, who are promising a heavy presence in the capital this weekend during the “Rolling Thunder Convoy,” CP reports.