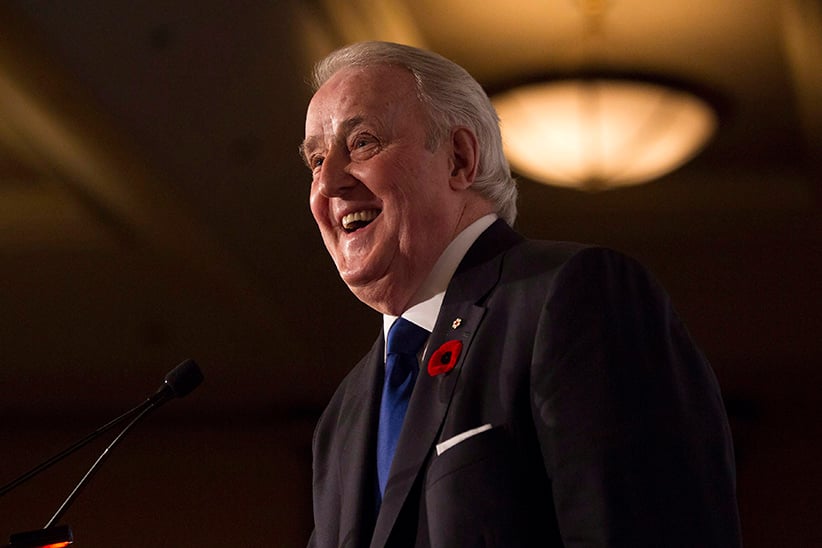 Former Prime Minister Brian Mulroney addresses the Albany Club at a special dinner marking the end of year-long celebrations to recognize the 200th anniversary of the birth of Sir John A. Macdonald, in Toronto, on Thursday, Nov. 5, 2015. (Chris Young/CP)

The Albany Club is a society exclusively for Conservative minds, recruiting members to private dining halls at its headquarters in Toronto and hosting political fundraisers, such as $400-per-cocktail soirees. Yet, as the club celebrated the 200th birthday of (Conservative) Sir John A. Macdonald on Thursday, guests Brian Mulroney and his introductory speaker, Peter MacKay, remarked primarily on Canada, not the Tories.

“Believe it or not, we’ve allowed a few tickets to fall into the hands of Liberals tonight,” admitted Albany Club president Scott Munnoch in his greeting. When MacKay introduced Mulroney as “Sir John A.’s worthy successor,” he held off on what could have been pure Conservative rhetoric and, instead, recited poetry and quoted New Democrat Stephen Lewis. When Mulroney, now 73, took the podium in front of six Canadian flags, he was quick to crack yuk-yuks at himself and even commend Justin Trudeau. “Our new Prime Minister is 43 years old, sparkling with promise and passion,” Mulroney said. “I know that we, and all Canadians, wish him well.”

Amid the audience, partisanship was similarly mellow. Packed into the Canadian Room of the Royal York Hotel were Albany Club members and non-members alike, applauding the words about Trudeau and the need to act in the long-term best interest of Canada. The crowd was mostly men, who wore wristwatches that they didn’t check and had moustaches not just for Movember. An aerial view would have been grey and greying, polka-dotted with bald spots.

Mulroney jested and quoted as he recalled Macdonald’s work in uniting the country. “He was a great Canadian, first of all, a great Canadian,” Mulroney told Maclean’s after his speech. Mulroney laughed about Conservative scandals in the U.S. and Britain, and told the story of a man who consistently asked to speak to “prime minister Mulroney” after his party lost the 1993 election, solely so the man could keep hearing the words, “Mr. Mulroney is no longer prime minister.”

Only midway through his speech did Mulroney begin a party-centric address. “I better move on to what Scott asked me to do,” he said. “If Mila were here, she’d give me the look.” Mulroney recounted his government’s work on the Meech Lake Accord, the Acid Rain Treaty and the North America Free Trade Agreement. His voice went up and down like the rolling hills of Gaspe, from whispers of the pristine snow in the Arctic to oration on the evil of South African apartheid, then back down again to words on his political ancestors.

Mulroney warned his fellow partisans about the Liberals rebuilding a “ferocious political machine” in Quebec, encouraged immediate preparation for 2019 and read historical quotes through his nose-tip spectacles. “We are losing sight of something we should have learned as teenagers: Just because something is popular doesn’t mean it’s right,” he said, met with a “here here!” and later a “hip hip, hooray!” from the audience.

After the club president declared the event “adjourned,” Mulroney laughed in joy as people swarmed him in disorderly fashion. He bowed his head at one point to kiss a woman’s hand, while the younger MacKay (now 50) greeted a supporter with, “Nice to meet you, man.” When a mention of the election came up, it quickly fled in favour of friendlier chatter.

Even if Macdonald himself had been in the room, Mulroney may well have remained queen bee. The utmost socialite, he still smelt of buttery vegetables from dinner as he made dates with people for breakfast.