Image of the Week: The Speaker of the House admonished her flock for cheering Trump's impeachment. Republicans went on about the Salem witch trials. The U.S. Constitution managed to survive. 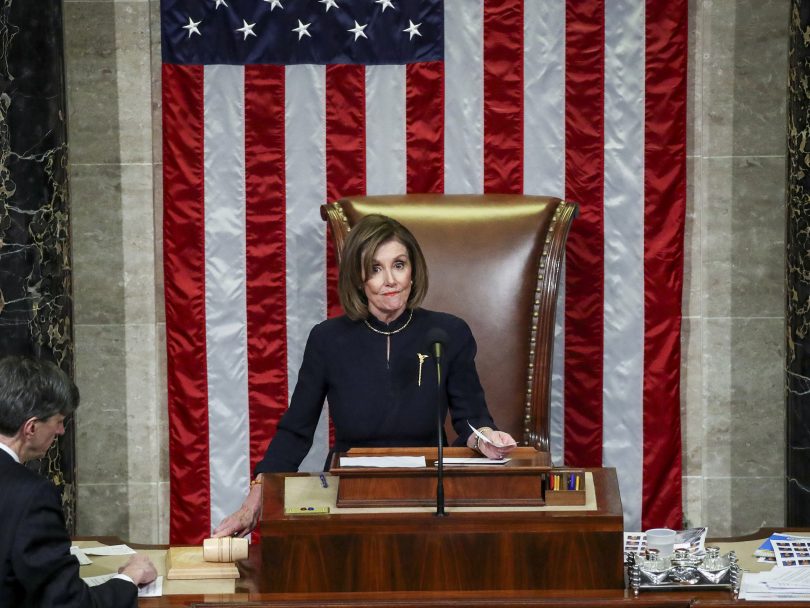 She wanted it to be a solemn affair. Nancy Pelosi, the Democratic Speaker of the U.S. House of Representatives, wore a funereal black dress during this week’s marathon impeachment session, illustrating the grave seriousness of the situation, while speaking in dire tones about praying for the well-being of her president. She was not in the mood for jokes. Her fellow lawmakers, on the other hand, could not be easily restrained. Hundreds of them took turns voicing ultimately inconsequential, sometimes outlandish thoughts, raising everything from Jesus and the Salem witch hunts (Republicans) to cringingly earnest monologues penned to their children (Democrats). At the end of the overlong day, Pelosi announced the unsurprising results—the Democrats won; The Donald is impeached—and almost immediately, cheers rose from her team. She swiftly raised her gavel like a school master, glaring at them, having commanded them days earlier not to cheer or hoot. They quieted down, prompting Republicans, like a gaggle of high schoolers snickering when a classmate is called to the principal’s office, to shout, “Ooooh!” So: was the day a testament to the power of constitutional action? Or an embarrassing display of useless, juvenile whining? Really, it was both.