A whirlwind of wheeling, dealing and cruel politicking puts an end to the Liberals' 16-year run. They have no one to blame but themselves. 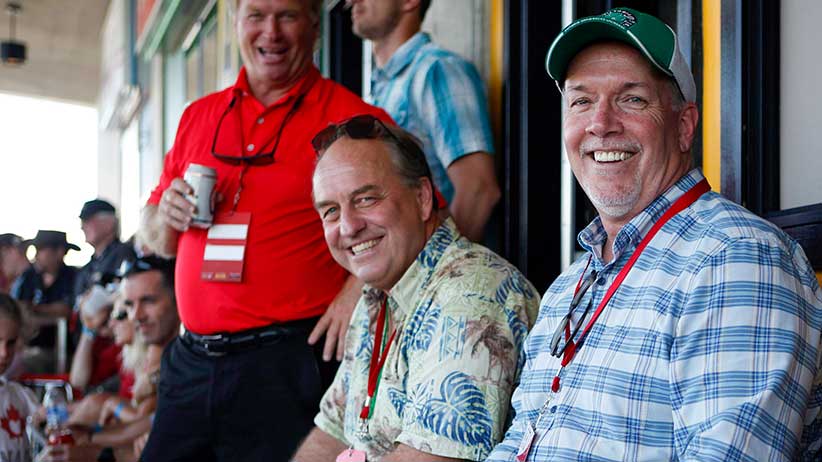 Weaver, left, and Horgan were spotted together on Sunday, laughing it up at a rugby match (CP)

It was a day for surprises in British Columbia. The Liberals’ 16-year run in power in the province appears to have come to a dramatic end. The Greens, made kingmakers after clinching a record three seats in the province’s May 9 election, finally tipped their hand: in a surprise Monday press conference, leader Andrew Weaver and the NDP’s John Horgan announced their intent to create what they call a “stable minority government.”

The two leaders, both of them Boomers raised on the southern end of Vancouver Island, grinned wildly, repeatedly making nice for the cameras—Weaver having apparently forgiven Horgan for the explosive “temper” he complained of just weeks ago. The Green leader, a Cambridge-educated university professor who can appear uncomfortable under the Klieg lights, looked relaxed, elated by the turn of events. If anyone it was Horgan, B.C.’s putative next premier, who seemed ill at ease, his voice catching as he began speaking to reporters.

Horgan once told Maclean’s he’d never met a more fierce opponent than Christy Clark, the Liberal leader. And the new deal gives their progressive alliance 44 votes on confidence motions; that’s just one more than the Liberals, who took 43 seats in the recent election. The agreement runs four years. But that’s assuming no scandals, frustrations or cancer scares threaten their hold on power (Weaver told reporters today he came “very, very close” to a deal with Liberals).

Indeed, with a one-vote plurality, “stable” seems like quite the stretch. But semantics were hardly top of mind this afternoon. Among the more pressing questions: what exactly happens to the premier, who declared victory in a rousing, fist-pumping speech on election night in Vancouver? It seems Clark was asking the same thing.

RELATED: Why the B.C. Green party should be wary of a coalition

Politics being the cruel game that it is, Clark appears to have found out she was being turfed at the same time everyone else in the province did. Both Horgan and Weaver—who met with Liberal negotiators late last night—made clear they had not phoned Clark to give her the heads-up. Weaver, who told reporters he’d made up his mind to side with the New Democrats this morning, said Clark was trying to call him as he headed in to the 2 p.m. PDT presser in Victoria.

For now, Clark is keeping her options open. Her office rushed out a statement 15 minutes after the surprise announcement. “In recent days, we have made every effort to reach a governing agreement while standing firm on our core beliefs,” it began. “As the incumbent government, and the party with the most seats in the legislature, we have a responsibility to carefully consider our next steps.” Clark added she will “have more to say tomorrow.”

Fighting words those may be, but the reality is: the gig is up. Clark could attempt to table a Throne Speech and budget, but it will be defeated, unless she somehow manages to turn an NDP MLA. She could ask Lt. Gov. Judith Guichon to call an election, but with a viable governing alternative waiting in the wings, that request would surely be denied. She could try to run the clock by declining to recall the assembly before summer, hoping angst over pipelines, progressive governance and a new voting system hit a boil, then go to Guichon, pointing to a hopelessly divided populace.

“Sure she can,” political scientist David Moscrop admits, a play he describes as “Harper-ish.” But he considers it unlikely. UBC political scientist Max Cameron notes the Clark government will “run out of money by September, so must convene the legislature by [fall] at the latest.” Both Moscrop and Cameron expect she will resign. For them, the only remaining question is when.

Weaver and Horgan at Monday’s media briefing outside the assembly in Victoria. THE CANADIAN PRESS/Chad Hipolito

A single term, and an election decided by just nine votes, is an ugly coda for a politician as talented as she. On the stump, none is better. Clark can claim four back-to-back balanced budgets. No province in the federation has a lower unemployment rate. B.C. has almost never been so wealthy. And the party managed to raise a staggering $36 million since the last election—roughly four times more than their opponents. This allowed them to employ full-time campaign staff in swing ridings almost since the last election. They could wrap newspapers with ads mocked up to look like front pages, and flood social media with Liberal ads. The NDP, meanwhile, were running a deficit every month and had to skip pre-election planning. They couldn’t afford it.

RELATED: What happens next in B.C.

Post-mortems will begin tomorrow. But a deep dive won’t be needed. In badly misjudging the public temperament on B.C.’s out-of-control party financing laws, the Liberals wasted every advantage. Clark refused, even after the RCMP began investigating a fundraising scandal involving Liberal lobbyists just six weeks out from the vote, to put in place even the simplest reforms, like banning corporate, union and foreign donations, something the NDP is promising to do on Day One.

Consider the outcome in Courtenay-Comox, the Vancouver Island riding the Liberals lost on election night by just nine votes (amended upon recount to 13, and eventually widened to 189 after absentee ballots were counted). Local resident Leah McCullough was so furious over the Liberals’ refusal to stop accepting unlimited corporate donations; to stop staging $15,000 fundraising dinners; to stop accepting money from the same multi-national corporations that were bidding for contracts and applying for licenses, that she ran for the B.C. Conservatives. The party has no leader, no money and no hope of forming government in the foreseeable future.

People “think the Liberals would have won the riding if there hadn’t been a Conservative candidate on the ballot,” McCullough told the Province newspaper. “They’re probably right, but they have only themselves to blame. I watched them rake in millions from real-estate developers while the cost of housing went through the roof. And I decided to do something about it.” McCullough paid out of pocket to run her campaign.

She added: “No matter how it all ends up, they will have to look at themselves, how they have governed and how they have treated people.”