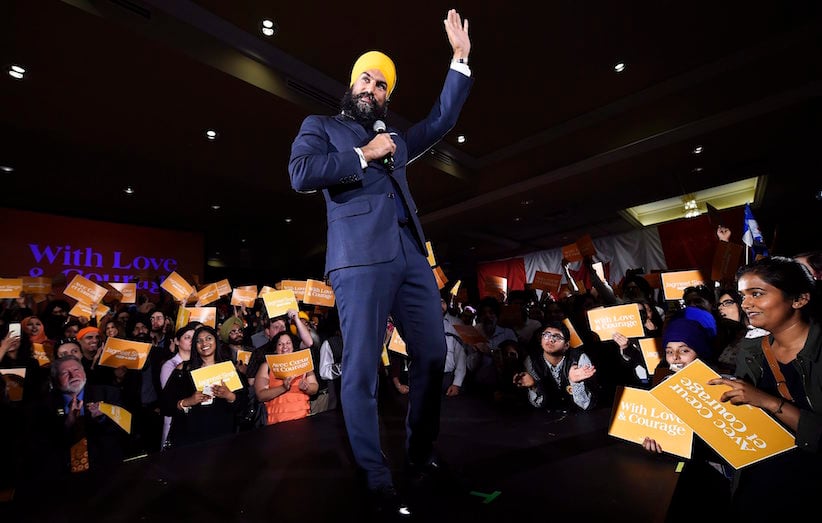 OTTAWA – Jagmeet Singh found himself under fire from several of his fellow federal NDP leadership hopefuls on Sunday, in what could be an early sign that his rivals consider him to be the candidate to beat.

Yet for all the attention — and the fanfare that greeted his late entrance into the leadership race last month — Singh appeared to be short on immediate answers for some of the most pointed attacks directed his way.

The sparring erupted during the NDP’s fourth leadership debate, this time in St. John’s, Nfld., where the five people hoping to lead the third-place party were in agreement more often than not.

That included criticism of the Trudeau government’s plan to dramatically increase defence spending and the need to tackle what the candidates said was the growing threat of income inequality.

Yet differences did emerge, and none was more evident than Singh’s refusal to follow the other candidates in categorically opposing an expansion of Kinder Morgan’s Trans Mountain oil pipeline in Alberta and B.C.

Manitoba MP Niki Ashton and B.C. MP Peter Julian both raised the issue in pointed questions to Singh, who stepped down as Ontario’s NDP deputy leader to run for the federal party’s leadership.

“Our federal caucus is opposed, and I believe that we can’t sit on the sidelines when it comes to such an important issue,” Ashton said at one point. “I’m wondering where you stand on Kinder Morgan.”

But Singh refused to take a position, saying instead that he wanted to consult with Alberta and B.C. before releasing his response to the pipeline expansion as part of a broader climate-change plan.

“I believe as a leader, we need to find ways to bring people together and we need to make sure that we speak to all people impacted,” said Singh, who entered the leadership race late but to much fanfare.

That didn’t sit well with either Ashton or Julian, who pressed the issue a few minutes later.

“We have a situation where British Columbians have said no. We have the federal caucus who has said no. There is a very clear consensus among New Democrats,” Julian said.

“I do not understand your hesitation about saying no to a project that has such a profound downside for British Columbians.”

Singh insisted he shared the same values as other New Democrats, which includes protecting the environment, fighting climate change and respecting indigenous rights.

“But I want to be respectful of the realities, so I look forward to meeting both with B.C. NDP folks, and folks from Alberta,” he said.

Ontario MP Charlie Angus also got in on the action when he demanded in a heated exchange to know whether Singh planned to run for federal office even if he didn’t win the leadership race.

“You have to make a decision,” Angus said. “I’m asking you think because you’re telling Canadians to have courage and join you. I would suggest that you could show courage and tell us: Are you going to join us?”

Federal NDP members will vote in October on who will replace Tom Mulcair as the party’s next leader.

Quebec MP Guy Caron actually set the stage for a more fiery leadership debate early on when he singled out for criticism a specific policy proposal that had been put forward by each of his competitors.

Caron’s own proposal to establish a minimum income level was in turn panned by several of the candidates as being unaffordable and unrealistic.

Angus also went after Ashton and Julian for their plans to offer free tuition for students, questioning where they would find the money.

There are four more leadership debates scheduled, with the next to take place in Saskatoon on July 11.