NDP says it has more than 124,000 card-carrying members eligible to vote for the next leader 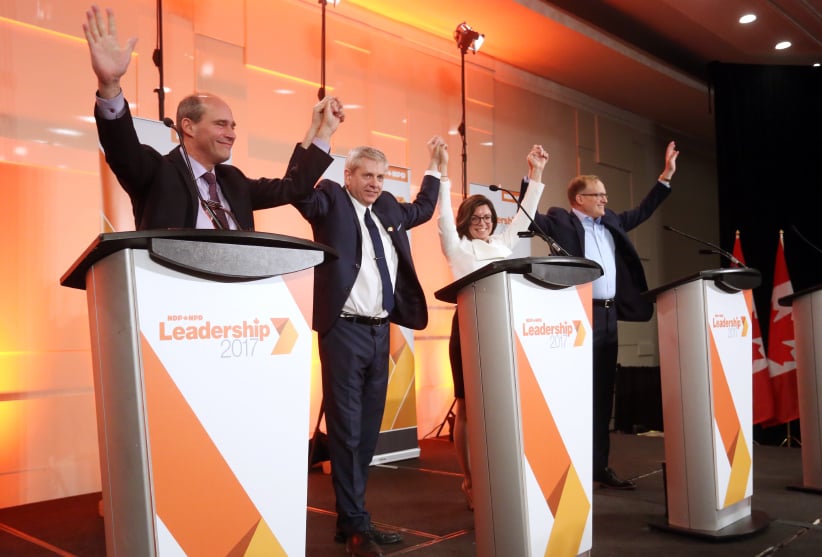 The four announced contenders in the federal NDP Ottawa leadership contest, Guy Caron, Charlie Angus, Niki Ashton and Peter Julian square off at the initial debate of the race in Ottawa on Mar. 12, 2017. (Andrew Meade)

The party said it now has more than 124,000 members — 32,000 of them in B.C. — who will be eligible to choose from among the four candidates who are vying to replace Tom Mulcair as the party’s federal leader.

The overall figure represents a big boost for the New Democrats, who had just 41,000 members at the end of March.

Party president Marit Stiles cited the numbers as evidence of renewed public enthusiasm towards the NDP.

“The party and the four candidates continue to make tremendous efforts to mobilize and engage supporters and the results are starting to show,” Stiles said in a statement.

“We’re confident this momentum will continue to grow as we launch our new leader in October.”

Earning the support of members will be a critical element of success for the leadership candidates — Ontario MP Charlie Angus; Jagmeet Singh, a member of the Ontario legislature; Manitoba MP Niki Ashton; and Quebec MP Guy Caron.

Union national president Paul Meinema said Singh is the candidate who best represents the interests of his members, adding he will help expand the party “to new heights with a new generation.”

“His continued dedication to social justice, and his drive to ensure the betterment of working Canadians are a part of the qualities that gave Jagmeet the advantage in the national council’s deliberations,” Meinema said.

Voting for the next NDP leader begins Sept. 18, shortly after the final leadership debate Sept. 10 in Vancouver.

The candidates are also set to deliver their final pitch to members at a so-called “showcase” Sept. 17 in Hamilton.

All party members are eligible to vote, either online or by mail. Candidates must win at least 50 per cent of the votes plus one to be declared the winner.