NDP MPs champion an end to the 'tampon tax'

'Quite frankly, women are tired of being ignored': House of Commons expected to vote on the 'tampon tax' next week 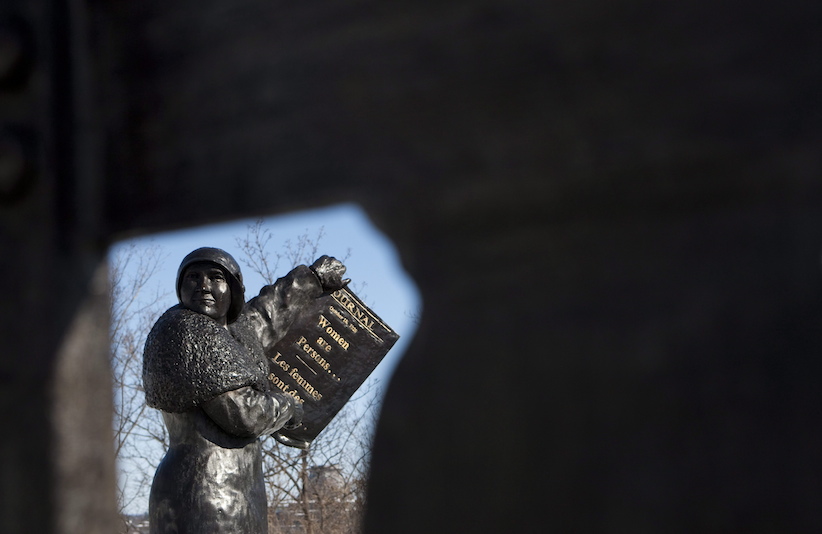 The statue of Nelly McClung, one of the Famous Five, is seen on Parliament Hill in this photo from 2011. (The Canadian Press)

OTTAWA—A private member’s motion calling for an end to the “tampon tax” will be debated in the House of Commons on Friday, with a vote expected next week, it was announced by NDP MPs and protesters from Canadian Menstruators, who gathered in front of the Famous Five monument on Parliament Hill demanding an end to taxes on sanitary products.

“I think it is very appropriate that we are here at the statue of the Famous Five,” said Irene Mathyssen, the New Democrat MP for London—Fanshawe, who put forward Bill C-282, an act to amend the Excise Tax Act (feminine hygiene products), in 2013. “It’s a reminder that women have experienced inequality in every sphere in this country but they have fought back. This is a very important bill. Only women pay taxes on feminine hygiene products and it is very, very clear that, when the GST was introduced, nobody gave any thought to the fact that this was going to impact women.”

A group of women from Canadian Menstruators, dressed in red shirts, shoes, cowboy boots and headbands and carrying “no tax on tampons” protest signs, gathered at Parliament Hill on Thursday, empowered by the Famous Five. Emily Murphy, Nellie McClung, Henrietta Muir Edwards, Louise McKinney and Irene Parlby were Alberta women who championed women’s rights and welfare and who campaigned to have the Supreme Court consider the question of “persons” so women could be appointed to the Senate.

The group has collected more than 72,000 signatures as part of an online petition, which NDP MPs delivered to Parliament Hill. The “no tax on tampons” campaign on Change.org has been building in Canada; in fact, before Bill C-282, there had been a previous bill by former NDP Judy Wasylycia-Leis that did not make it to a vote, said Mathyssen. Around the world, there have been petitions in Australia and Britain, and in the U.K., protesters have made inroads—the tampon tax has fallen to five per cent from 17.5 per cent and was debated in this week’s election.

Jill Piebiak, 28, who founded Canadian Menstruators, said it is time to end the archaic tax. “In this country we don’t pay GST on many essential items, including basic groceries and medical supplies. This means that there’s no sales taxes charged on cocktail cherries, wedding cakes, incontinence products or Viagra. Canadian households pay millions of dollars in sales tax on tampons, pads, menstrual cups and panty liners ever year. Menstruators buy these products every month for about 40 years. It’s a non-optional tax that is only borne by half of the population. And, though it may seem like small change, it is a tax that places an unfair burden on women [and] trans people.”

Piebiak, who works at a non-profit environmental organization in Toronto, launched her campaign in January. “Our goal was to get 50,000 online signatures and we now have over 72,000. We just wanted to bring this discriminatory tax to the public eye. A lot of people didn’t realize that it was there and people who realized were frustrated. You can’t choose not to use these products. There is no other product that is discriminatory in this way. It is a gender tax rate.”

Her group estimates taxes on sanitary products raises an estimated $36 million for the federal government each year. Mathyssen called it an insignificant amount in a $200-billion budget.

The Conservatives and Liberals have not said if they will support the bill. If it does not pass, Mathyssen said the NDP will continue to champion the issue into the fall election.

Mylène Freeman, the NDP’s status of women critic and MP for Argenteuil—Papineau—Mirabel, said feminine hygiene products “are not a luxury for women and girls.” She urged Conservatives to “do the right thing and remove the tax.”

She believes the tax is also an extra hardship for low-income women.

The only man at the Parliament Hill event was Jack Harris, NDP MP for St. John’s East, who showed up to support his colleagues. “I think it’s a recognition of the facts of life and things are different for women—and there should be consideration given to that.”

Beyond the tax on tampons campaign, some women in the United States have taken things a step further. Free the Tampons, a campaign begun by Nancy Kramer, calls for free sanitary products in restrooms. She outlined her case at a TEDxColumbus talk. “Who decided toilet paper was free, and tampons weren’t? Who decided paper towels, soap, seat covers are free and tampons aren’t?”