May 15, 2018: MP Christine Moore plans to sue the veteran who alleged she abused her power and we'll be waiting 50 years to know why the Supreme Court decided against freeing the beer.

Interested in how nine honourable justices jointly decided against freeing the beer this year? Well, I hope you’re less than 32 years and 25 days old, because a recent change will keep all the paper generated by the judiciary’s top members as they confer on cases hidden from the prying eyes of the public for a half-century. At least one close court observer is distinctly unimpressed. [Globe story, Tweet]

The heads of government and, by proxy, state, are spending the day in Alberta. Governor General Julie Payette is on her inaugural tour of the province, while Justin Trudeau is cutting ribbons on infrastructure.

Which parties are literally going the distance?

Ontario Election episodes: Doug Ford will rally this morning on the home turf of his greatest rival: the Toronto streetcar. The PCs are gathering on Dundas Street, where their leader’s light rail nemeses are being subbed out for busses due to construction.

Southwestern Ontario is the focus of the NDP’s attention as Andrea Horwath unveils the party’s area promises in London. No, the other one. The odometer on the three leaders’ buses are starting to look more alike, colleague Terra Ciolfe’s latest charting shows. [Chart] 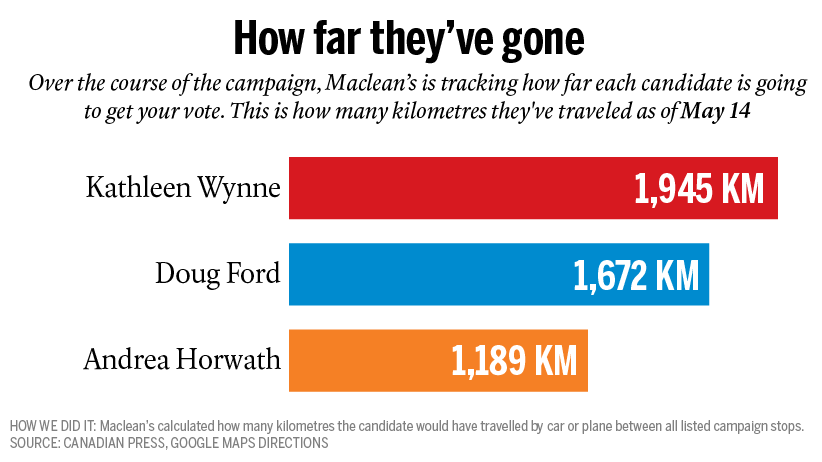 The Liberals took a real close look at the NDP platform, but this time instead of nicking their notions—as their leftward opponents would have us believe they do regularly—they say they’ve found some money missing. [Toronto Star story]

Donald Trump’s alterations to taxation are proving troublesome for some residents of Canada, and not just for competitive reasons. A measure aimed at getting the likes of Apple to repatriate their abroad earnings also impacts U.S. citizens who live this side of the 49th parallel and use private corporations to manage their owings. A bunch of Canadian MPs are bound for Washington, D.C., today, and plan to point out the inadvertent effect. [CBC story]

Not disappointed, just angry: An aide to the finance minister did not appreciate an insurance industry association’s interpretation of some provisions in Bill Morneau’s budget bill, and reportedly told them not to go spreading it around to senators and MPs, in a vexed tone of voice. The department termed the phone calls in question “frank and direct” and insisted no instructions were issued. (I’m glad someone else gets as much use out of a thesaurus as I do). [Globe story]

MP Christine Moore plans to sue the veteran who alleged she misused her position and engaged in inappropriate sexual conduct towards him last week. She also presented her version of their interactions at an event in her Quebec riding. [Global News story]

Anyone who knows Canada’s story knows May 15 matters. On that day in 1603, Samuel de Champlain set sail for the new world. In 1814, a few hundred Americans burned down Port Dover on the shores of Lake Erie. In 1919, Winnipeg workers launched a general strike.

But we can’t allow our elected representatives to get lost in the midst. So happy birthday to MPs Fayçal El-Khoury, Anthony Rota and Brad Trost.