Never mind the budget, here's a happy family with a tax credit 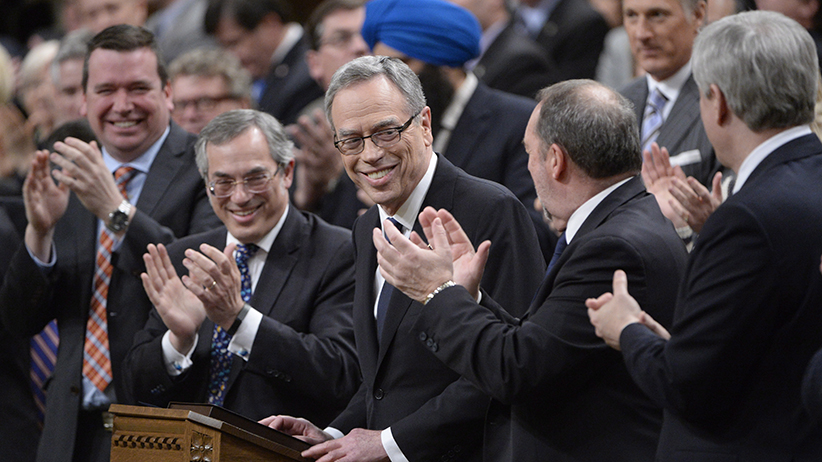 Perhaps if the New Democrats and Liberals had been willing to hear testimony from one of the government’s television ads, there would have been agreement among the members of the Finance committee yesterday to proceed with hearings on the state of the nation’s finances. The opposition critics could have asked their questions about whether and how the federal budget will be balanced and, after each question, the committee clerk could have hit the play button and, on a flat screen perched at the end of the table, could have flashed the image of a happy family celebrating its tax credits and baby bonuses. Or, for the sake of maintaining ministerial accountability, Joe Oliver could have been in charge of pressing the play button.

In lieu of such a compromise, a majority of the members of the Finance committee apparently decided yesterday afternoon that they were not interested in considering the parliamentary budget officer (PBO)’s latest report on the state of the federal budget—a report most notable for its suggestion that the federal government is, contrary to official reports, on track to record a deficit in this fiscal year. The committee began its consideration of the opposition proposal, in camera, at 4 p.m. By 4:09 p.m., the reporters waiting outside the room were informed that the meeting had concluded.

Those nine minutes were no doubt spent on a robust discussion of the considerations and possibilities for agreement. The exact proceedings are officially lost to in-camera secrecy, but the suggestion afterward was that the Conservatives were not interested.

A team sport involves protecting one’s own and deferring to management. Last month, Conservative MPs turned down proposals to study the government’s desire to retroactively rewrite access-to-information law. In March, New Democrats complained that the Environment committee was not concerning itself with climate change (similarly contentious issues such as the temporary foreign worker program and the health care provided for refugee claimants also went unstudied during this Parliament). A suggestion two years ago that the Prime Minister testify at hearings into his office’s handling of Mike Duffy’s affairs surely never had a chance of being adopted. And so now why would the Conservatives ever set the Finance minister up for a challenging afternoon, even if they could spend a good portion of the time lobbing friendly queries to him?

Tis tempting to dream. A commitment to new independence for the members of committees—members elected by the House to permanent posts to put them beyond the ability of the whips to remove them—might at least broaden the realm of what is possible, might make it possible for an independent-minded MP or two to influence the proceedings and push the debate. Perhaps with a Rathgeberian presence on the Finance committee, we’d be looking forward to hearing from the Finance minister this week.

Were the New Democrats and Liberals “playing politics” here, too? Of course. But in doing their politics, they could at least invoke decent principles.

“Ministers of Finance are supposed to provide that information and clarity to Canadians on an ongoing basis. That’s part of their job,” posited Liberal Finance critic Scott Brison.

James Rajotte, chair of the Finance committee, suggested afterward that it wasn’t particularly useful to get caught up right now in debating surplus or deficit projections for 10 months hence. “Speaking for myself personally, I don’t know how helpful it is for us to continually debate what it will be then,” he said. There is possibly something to this. But it is far too late for reasonableness. As the Globe and Mail‘s editors wrote last week, a small deficit is only pivotal insofar as the Conservatives have made balancing the budget out to be the highest priority of public responsibility. Joe Oliver spent 450 words of his budget speech reflecting on the greatness of balance—the longest portion of that speech—and even committed to legislation that would require the federal government to balance the budget in normal times. That balance for 2015-16—officially a surplus of $1.4 billion—already relied on $2 billion from the so-called “contingency fund.” And now oil is still cheap and the economy has possibly been in recession.

Caron explained yesterday that the NDP is now committed to balancing the budget over the “economic cycle,” a caveat that would seem to allow for a deficit in this fiscal year. The Liberals have similarly backed away from committing to balance. The Conservatives, undaunted by the PBO’s projection of a deficit or the Bank of Canada’s GDP estimates, claim the budget will still be balanced, but without providing an explanation of how.

Last week, Oliver was captured on film walking away from questions about the PBO’s projection of a deficit, while the minister’s bow-tied aide dutifully threw himself in front of the reporters who were giving chase. To appear at the Finance committee to offer a rare summer update on the fiscal situation might have been a noble move, but then, it’s been six years since a Finance minister presented a fall update to Parliament; beginning in 2009, Jim Flaherty, then Oliver, have chosen to present themselves instead to luncheon audiences in other cities. Perhaps if Caron and Brison had finagled an invitation for Oliver this week from the Moose Jaw chamber of commerce, an update would have been more forthcoming.

All of which might just be more philosophical moaning about transparency, accountability, the press, and the theoretical primacy of Parliament, were it not for the incessant presence of the government’s publicly financed advertisements. While Oliver won’t appear before the Finance committee this week, TV ads touting his government’s tax cuts would seem to have been airing nightly. And while the government is basically free to acknowledge the press gallery as much or as little as it desires, and the Conservatives are sufficiently empowered by voters to control the agenda of the Finance committee, any avoidance of accountability should make the unacceptability of self-promotional government advertising all the more glaring.

Indeed, the federal government’s official communication policy implicitly acknowledges how problematic such advertising can be. “Institutions must suspend their advertising during general elections of the Government of Canada,” the policy dictates. “Advertising is only permitted when: an institution is required by statute or regulation to issue a public notice for legal purposes; an institution must inform the public of a danger to health, safety or the environment; or an institution must post an employment or staffing notice.”

No one can seriously claim at this point that political campaigning only occurs after the Governor General has drawn up the writs of election. And if the use of government advertising is so fraught that it should be restricted around the date of election, why shouldn’t it be restricted at all times? Jean-Pierre Kingsley, the former chief electoral officer, has suggested a six-month ban on non-essential ads in advance of elections, but a total ban seems more appropriate.

If the government is eager to promote its agenda, it has a few dozen ministers on salary, and there is a handsomely appointed facility in downtown Ottawa, maintained at public expense, from which they might speak. And if Oliver needs to tighten the federal budget even further, he can hardly justify the extravagance of self-promotion.