Politics Insider for Apr. 7: Foreigners to be temporarily barred from buying homes in Canada; Ottawa to summon the Russian ambassador for tough questions over Kyiv atrocities; an Atlantic oil megaproject gets approved 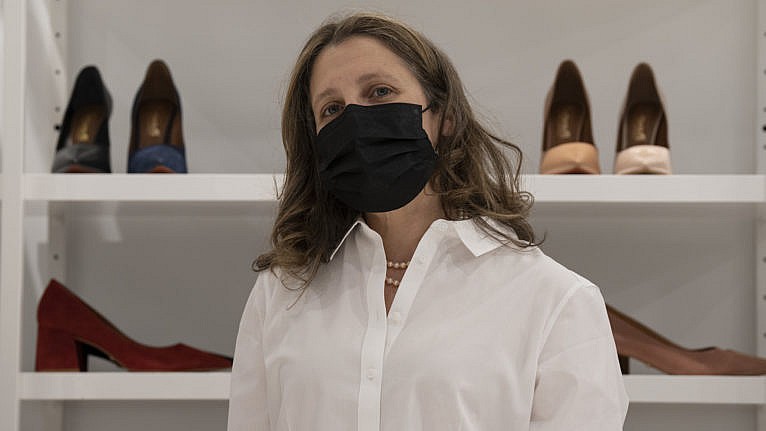 Finance Minister Chrystia Freeland speaks with the media after purchasing a new pair of shoes at a local shop, April 6, 2022, in Ottawa. (Adrian Wyld/The Canadian Press)

The federal budget will include up to $8 billion in new money into for DND, CBC’s Murray Brewster reported Wednesday.

A senior government source, speaking on background Wednesday, said that the budget’s billions of dollars in new defence spending will be over and above the increases the Liberal government committed to in its 2017 defence policy. As Defence Minister Anita Anand signaled in a speech last month, the federal government is making a major multi-year investment in NORAD, the joint U.S.-Canada air and maritime defence command. The backbone of NORAD is a chain of radar stations that are nearing the end of their service life. Anand recently acknowledged that the Canadian military’s stock of weapons it can donate has been largely depleted. The source said Ukrainian President Volodomyr Zelensky’s top request of Prime Minister Justin Trudeau’s government is for more arms.

In the Globe, John Ibbitson writes, even if there is more money, it will likely not signify a shift from the traditional patterns of Canadian politics.

Defence spending doesn’t even register in polls of Canadian priorities, says Darrell Bricker, CEO of the polling firm Ipsos Public Affairs. (Mr. Bricker and I have collaborated on two books.) “It’s not that people don’t care,” Mr. Bricker said. “It’s that they don’t know how to care.” The military in Canada has such a small footprint that its well-being doesn’t register with Canadians. Politicians don’t prioritize it because no one raises the issue at the door. As Andrew Burtch, post-1945 historian at the Canadian War Museum, points out, “In Canada, when it comes down to a choice between guns or butter, butter tends to win.”

Housing measure: The budget will make it illegal for foreigners to buy any residential properties in Canada for the next two years, CTV reports, part of a focus on housing affordability.

The government is set to follow through on a series of 2021 Liberal campaign commitments as part of the 2022 budget, including implementing a new “tax-free First Home Savings Account” that will allow Canadians under 40 to save up to $40,000 towards their first home. The overall housing package is expected to total approximately $10 billion over the next five years. The foreign buyers ban will apply to condos, apartments, and single residential units. Permanent residents, foreign workers, and students will be excluded from this new measure. Foreigners who are purchasing their primary residence here in Canada will be exempt.

No expulsion: Trudeau said Wednesday that he is hesitant to expel Russian diplomats because retaliation from the Kremlin would undermine the work performed by the Canadian embassy in Russia, the Globe reports: “There will always be a tit-for-tat approach from the Russians on this. I am just not sure the symbolic gesture of excluding Russian diplomats from what they are doing in Canada is worth the cost of losing our diplomats in Moscow.”

Joly told reporters at NATO headquarters in Brussels on Wednesday that the ambassador will be shown photos of what happened in the Ukrainian capital’s outskirts. “Canada is very seized with what happened over the weekend, like mentioned. I instructed my deputy minister to summon the Russian ambassador in Ottawa to make sure he is presented with the images of what happened in Irpin and Bucha,” Joly said. “There’s a level of inhumanity in what we’ve seen in Bucha.” Oleg V. Stepanov, Russia’s ambassador to Canada, was previously summoned on Feb. 24 – the day Russia invaded Ukraine. Joly used the opportunity to directly express her condemnation of the war.

Guilbeault said he the project would not cause “significant adverse environmental effects” with the implementation of mitigation measures: “We accept the conclusions of the Impact Assessment Agency of Canada on the Bay du Nord project.”

Unimpressed: Earlier, after the news had leaked but before he announced it, Guilbeault was grilled in committee by NDP MP Charlie Angus, who mocked the government for approving a massive oil project while promising to tackle climate change, the Citizen reports.

Deepwater: The Narwhal takes an in-depth look at the environmental issues at play.

Will Singh pay? In the Star, Althia Raj wonders if Jagmeet Singh will end up paying a political price for the Trudeau government’s decision to approve Bay du Nord.

But beyond being concerned, Singh must now defend why supporting a new dental care program and backing new measures to make housing more affordable are worth propping up a government that supports more fossil fuel developments when progressive voters are concerned that irreversible damage will be done in these crucial next three years.

Kilgour passes: David Kilgour, who was known his fierce independent streak and dedication to human rights, died on Tuesday at 81, CBC reports. Kilgour was first elected as an MP for Edmonton—Strathcona in 1979 as a member of the Progressive Conservative party. He quit the caucus of Prime Minister Brian Mulroney in 1990 because he opposed the implementation of the GST. He joined the Liberals months later and … in 2005, Kilgour publicly quit a major federal party for the second time in his career when he left the Liberals over what he said were “about 10 issues.”

Deep Skippy Dive: Politico has a thoughtful deep dive on Pierre Poilievre, from Nick Taylor-Vaisey, who Insider readers will recall, Andy Blartchford and Zi-Ann Lum. They do a close read of the CPC frontrunner’s stump speech, drawing on savvy observers to explain what messages he is hitting and why.

An inescapable tension animates every Conservative leadership race. Each candidate’s popularity with the party base is measured against their future palatability with the rest of the country. It’s not clear Poilievre has the secret sauce to win over Canada. But also, that’s not his goal just yet.