In Newfoundland, a razor-close election that nobody really won

A province in dire need of stable government instead gets a minority, and a likely return to the polls in the near future 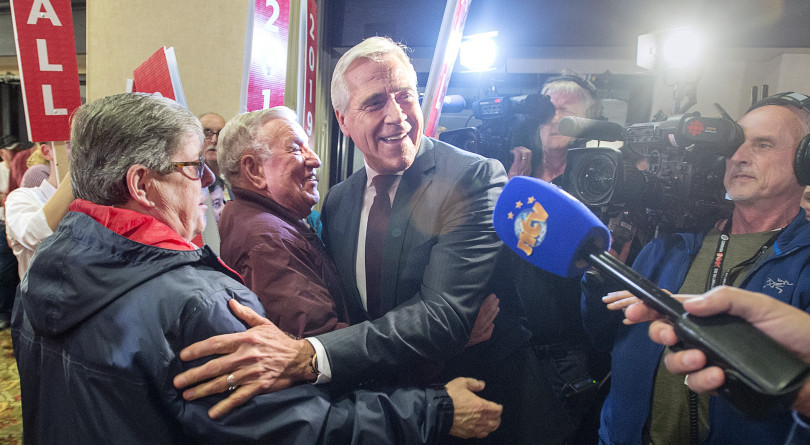 So nobody won in Newfoundland and Labrador—not really.

It was a snap election the people of Newfoundland didn’t particularly want. The two leading parties, the governing Liberals and the Progressive Conservatives, were so alike that one voter said she could close her eyes and put a check mark next to either one. Another joked she could choose via “eeny, meeny, miny, moe.”

And after a campaign criticized for its paucity of policy ideas to address the province’s dire financial position, the people of Newfoundland will now have a minority government in the House of Assembly—with no clear path to the stable leadership the province badly needs.

The Liberals narrowly held off the blue wave that has taken over many provincial legislatures in Canada, but with most of the votes counted, Premier Dwight Ball’s party stood to win only 20 of 40 seats in the provincial House of Assembly, while the Progressive Conservatives were leading in 15 ridings. The NDP was leading in three while Independent candidates had been declared in two.

“The message they’re sending to us is we must come together,” Ball told an audience in Deer Lake after TV stations had called the result.

That message certainly wasn’t received by PC leader Ches Crosbie. “We have a situation of constitutional instability,” he said in his post-election speech. “Where will this end up? It will not end up with Dwight Ball as Premier of Newfoundland one year from now.

“I am not conceding victory the Liberals,” he added. “They will have to struggle for the next few months and years to hang onto power.” And what the Liberals won’t have next time, he stressed, is the ability to “use every possible advantage of power to cut short the democratic process … to pull the rug out under from under the NDP’s feet and the PC party’s feet.”

Crosbie’s reference was well understood by partisans and regular voters alike. Ball had gotten a head start on the campaign last month with a snap election called within 24 hours of releasing the budget, leaving the opposition scrambling to start the campaign.

The Liberals, as a result, were the only party fully prepared out of the gates with a platform, a full slate of candidates, all 27 incumbents seeking re-election, little fear of vote-splitting with the NDP and money in their war chest.

“The fact that it was called this early did catch us off guard a little bit,” acknowledged PC campaign manager Robert Lundrigan before the votes came in. “We had a few candidates who could not sign on until the last second.”

The PCs could only register 39 candidates in the province’s 40 ridings before deadline, and booted another candidate out only a week before the election when anti-abortion and anti-gay marriage views were uncovered on his social media history.

The NDP was even less prepared. Once considered on the verge of Official Opposition, the party struggled mightily to find viable candidates, as infighting and organizational problems limited it to 14 before the deadline.

RELATED: Think your election choice is tough? Try being a Newfoundlander

It was shaping up to be a missed opportunity of glaring proportion. “Newfoundlanders blame the economic climate on the PC party that was in government for a long time, while also not feeling confidence in the Liberals because of harassment in the House, new taxes and the [deficit reduction] levy,” said Amanda Bittner, a political science professor at the Memorial University of Newfoundland. “The people want change. If the NDP had been better organized, there might have been more a feeling to a switch to something new.”

Yet when the smoke had cleared, the early election call appeared to have backfired. The Tories came close to pulling the same share of the popular vote the Liberals did, while the NDP performed surprisingly well, winning three seats. Along with the two won by Independents, they held the potential to give the New Democrats and leader Alison Coffin the balance of power.

“The Liberals played the game—hard,” said Russell Williams, head of the Department of Political Science at the Memorial University of Newfoundland; but Ball’s early election call may have left many voters cynical because it appeared to be a self-serving move.

“They created a budget with no intention to debate it in the House, and called the election when the other parties weren’t organized,” agreed Bittner. “It was not taking voters or democracy seriously when we have a lot of challenges. People know politics is a game, but when that becomes too crass, then folks aren’t happy.”

Whatever the reason for the Liberals’ backslide—their seat count is down seven from when the election was called—it will almost certainly trigger a round of negotiations to choose a Speaker, much like after the 2017 B.C. election. All eyes will be on the two Independents, one of whom left the Liberals amid allegations of harassment and bullying in the House.

RELATED: Newfoundland has a problem: no one wants to be a politician

“It is important that we work together for all the people of Newfoundland and Labrador,” Ball said in a post-election speech in Corner Brook. “I will continue to welcome collaboration within the House of Assembly. People expect that from their elected officials.”

Perhaps, but after failing to deliver on promises from their last campaign to reverse an HST increase and make sure no public-sector workers were laid off, the Liberals weren’t seen as entirely trustworthy. Meanwhile, fresh promises—like a cutting the tax on auto insurance and doing away with the unpopular “debt reduction levy” on residents earning more than $50,000 annually—often fell on deaf ears. They came, after all, from the same party that introduced the taxes a few years ago, presenting them as difficult but necessary decisions.

And delivering on such pledges will be no easier now that it was three and a-half years ago. The province has the oldest population in Canada, a falling GDP for 2018, and the highest debt per capita in its history. The Liberals presented few policy platforms that would address the budget deficit in a substantial way, be it to increase revenue or reign spending.

They were reduced instead to playing effective defence, emphasizing to voters that the dire finances they inherited from the PCs could not be fixed in only four years and hammering on how the Muskrat Falls “boondoggle” took place under the PCs tenure as the province’s finances turned south. Crosbie tried to distance himself from Muskrat Falls, saying it was now a different PC party under new leadership—even if the PC’s were in power from 2003-2015.

Unfortunately for the PC leader, many voters keen for change saw little to choose between his program and Ball’s. In the riding of St. John’s West, local resident doctor Chris Fraser said he and friends found not only that both parties emphasized the same issues, but that they proposed the same ideas to address them. “It’s almost like the hat they’re wearing barely matters,” he says.

While Fraser was impressed by Crosbie, he was less wowed by his local PC candidate. Stuck between casting a ballot for the benefit of the PC leader or for his preferred local Liberal representative, he was undecided until the morning of election day. He picked the red hat.

Soon, he and the rest of the people of Newfoundland and Labrador may have to do it all over.

“The loser in this election is undoubtedly the public,” lamented Williams. “The public is going to get a response to this [fiscal] situation that they didn’t understand when they went to the ballot box. That’s bad for the public, bad for the economy of the province and bad for democracy.”

This story has been updated with election results and quotes