Nigel Wright and a peek behind the curtain 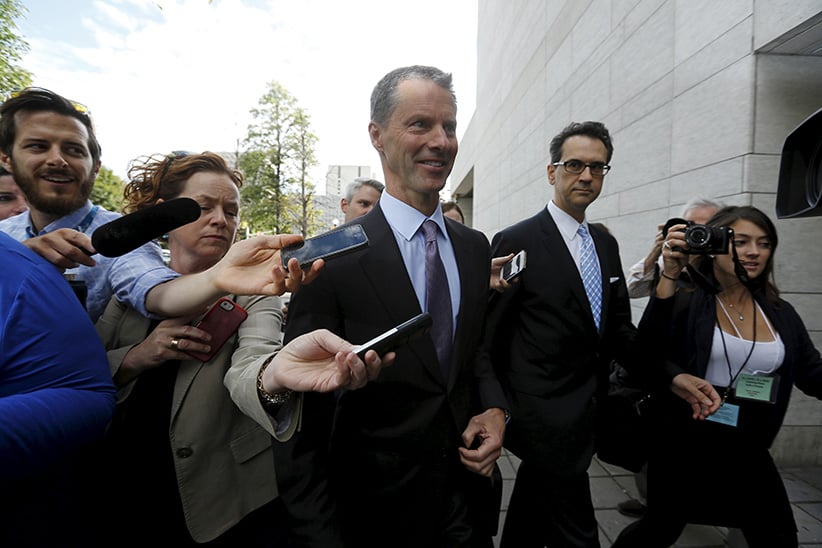 The first sentences are poetic.

“Agree,” the tragic hero writes in an email to his comrades on the night of Feb. 6, 2013. “But let this small group be under no illusion. I think that this is going to end badly.”

So begins the first volume of a two-volume collection, tabled in an Ottawa court today, of Nigel Wright’s notable correspondence between that cold February evening and the morning of May 9 of that same year.

The grand tone of the second sentence, the perfect foreshadowing of the third sentence, here is how the movie—The Millionaire & the Senator, coming to CBC this fall—would begin. Wright has seemingly just agreed with the text of a statement that Mike Duffy would like to release in response to questions about his residential status. (On Feb. 4, it was reported that Duffy had attempted to expedite his application for a Prince Edward Island health card. On Feb. 5, it was noted that Duffy wasn’t paying property taxes in P.E.I. at the rate applied to residents.)

Wright told the court this afternoon that he has come to regret the cheque he cut. But the rest of us might appreciate that his generosity has ultimately resulted in a remarkable gesture of openness and transparency in government—a surely unprecedented look inside the normally secret machinations of the nation’s most-powerful office. Pity only that it required the intervention of the RCMP and a Crown prosecutor and the context of a criminal trial to precipitate the release of these 426 pages. Otherwise this day would’ve been cause for the government to boast, as indeed Tony Clement already has, that it is the most transparent administration in this nation’s history. Let’s see the New Democrats and Liberals promise to be more transparent than the Conservatives have been forced to be here.

Laid out in missives we were never meant to see are, simply put, the efforts of the Prime Minister’s closest aides to control a public controversy. “I had no foreknowledge of it,” Wright advises Duffy on Feb. 11 of a move made by Sen. Marjory LeBreton, government leader in the Senate at the time. “When I learned of it I asked for all unilateral action from that office to cease before being cleared with me. I was not pleased.”

“We will not set anything in motion without knowing where we want it to end up and how we will make that happen,” Wright advises other members of the PMO a few hours later.

As with theatre, there is the drafting of “lines,” as well as statements and responses to expected questions. “When I’m home on the Island, I’m often out (list announcements and accomplishments for various P.E.I. communities),” reads the draft of one proposed statement. That is attached to a “scenario for repayment” that includes a suggestion that an advisory of Duffy’s intention to meet the media be sent out just an hour ahead of time so as to “limit intervention from the Ottawa bureaus and or Opposition mobilization.”

Preparatory documentation is seemingly referred to as “product” and the release of a report is referred to as a “rollout,” as if the subject at hand is a new line of hair-care accoutrements.

We learn that there is apparently only one semi-reasonable reporter at Charlottetown’s daily paper, the Guardian. “I should add that Mike does not want to do the Guardian,” a PMO press secretary advises at one point. “He gave it some thought and does not believe that he will get a decent hit out of the one (semi-reasonable) reporter in the paper.”

There are references of Sen. Irving Gerstein’s communications with a source at Deloitte, the firm that was supposed to audit Duffy’s expense claims.

And there are references to the PMO’s efforts to have a Senate committee’s report on Duffy rewritten (including the objection of an aide to Sen. LeBreton, Christopher Montgomery, who is said to have protested that senators should not “compromise” themselves).

The early headline of Wright’s first day on the stand was his testimony that not only didn’t he tell the Prime Minister that he was going to cover Duffy’s questionable expenses, but that he also didn’t tell the Prime Minister of an earlier plan to have the Conservative party cut a cheque. It would be interesting to know precisely how long Harper remained blissfully unaware of that idea, but the method of repayment is only the most easily salacious part of this affair.

Was Harper aware of Gerstein’s contact with Deloitte? Does he approve of that effort?

Was Harper aware of his office’s involvement in rewriting a Senate committee report? Does he approve of those efforts?

Two years ago, the Prime Minister attempted to sidestep the latter matter.

“In this case,” he said, “Sen. [David] Tkachuk has been clear that the Senate obviously got advice from all kinds of sources, but in the end that committee made its own decisions and its own recommendations.”

There is a certain principle in here. Tkachuk and Carolyn Stewart-Olsen, the two senators on the subcommittee in question, are both adults who must take ultimate responsibility for their own actions. They are not, by force of law, the slaves, prisoners or employees of the PMO.

But that doesn’t remove from question the efforts of the PMO—either in principle (the executive involving itself in the affairs of the legislature) or in practice (the actual effect of the edits that were made).

Dwelling on the former can seem a tad earnest, but it is at least trendy to be so earnest. What this peek behind the curtain invites are various questions about the workings of the national legislature and its members.

“If the rules and procedures committee doesn’t have the right membership, then the Senate by motion should constitute a special committee that will have the right Senators on board,” Wright advised on Feb. 16. “We cannot rely on the Senate leader’s office to get this right.”

Of LeBreton’s office, Wright fretted later that, “We cannot assume that that office can execute, partly because she and the whole office are curiously hands-off when it comes to how the Senate clerk, committees and subcommittees go about their business.”

Curiously, one might thus ask how hands-on House leadership is with the business of House committees. Was the handling of the Duffy affair exceptional or in keeping with the normal manner of business?

There is possibly nothing in those 426 pages—the scripting, the managing, and the role of the Prime Minister’s Office—that wasn’t already generally assumed about How Politics Works. (Though that doesn’t quite eliminate the fun of seeing it all laid out in black and white.) And stage management in politics is not new—the job of presidential speechwriter dates to Judson Welliver in 1921. And we should be realistic about this business. Governments and political parties are massive operations that require, in the public marketplace, a certain coherence. The partisan herds understand that for their individual and collective survival they are better off staying close together.

But at what point does stage management rob Parliament of much of its potential utility? And is there any way the country wouldn’t be better served if the PMO, and party leaders’ offices generally, had less influence over legislators and the business of the legislature?*

Perhaps Nigel Wright would be better off. He might now agree that the government too might be better off if instead of using the authority and resources of his office to manage the affairs of a senator, the chief of staff had told Mr. Duffy that it was not for the PMO to manage the operations of a Senate committee, particularly for the sake of sparing a senator some trouble.

*Liberals and New Democrats might be expected to explain how their PMOs and their ministers’ offices would interact with MPs and the business of the House. The Liberals have at least gone some way in promising that parliamentary secretaries would be removed from committees and committee chairs would be elected by the House.