Noah and the Liberal flood 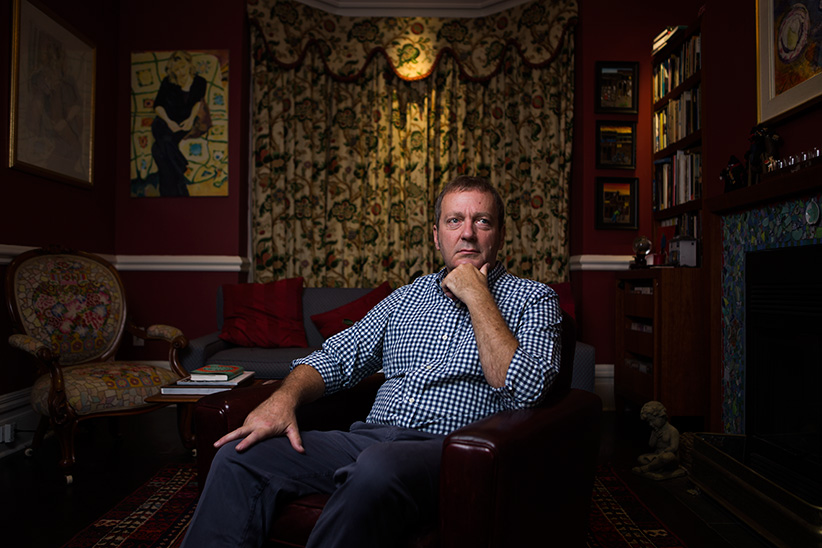 So it wasn’t all for a lark, a chance for an inside glimpse at a reviled profession, followed up by a mocking tome with a Hunter S. Thompson-esque subtitle. Noah Richler’s The Candidate: Fear and Loathing on the Campaign Trail, an account of his run for the NDP in Toronto’s midtown riding of Toronto–St. Paul’s in the 2015 federal election, is certainly surreal enough. There are some fine fantasy sequences, like the one where cabinet minister Richler (public safety, no less) watches in Parliament as Prime Minister Tom Mulcair effortlessly vivisects the Opposition.

But the memoir is no more surreal than the Canadian way of politics and the intense 11-week experience demand. Richler, once he had thrown his hat in the ring—and had it picked up by the NDP, no sure thing itself — was as politically (and partisanly) committed as any anti-Harperite in the nation. He was also engaged, if more intermittently, in watching himself go down the rabbit hole. If some of those experiences are coloured by the glow of hindsight, the self-awareness is what makes his account, at times as chaotic as the campaign itself, so compelling. By the end, readers can’t help but conclude that every suspicion, hope and cliché about politics is both true and false. It boils down, says Richler in an interview, to the “paradox that people put themselves forward to do good—and the way they have to do that is to put their fortunes in the hands of the amoral, the spin doctors.”

The 56-year-old writer and critic had been contemplating political life with increasing urgency since Stephen Harper’s Conservatives won their majority in 2011. The choice of non-Tory party wasn’t entirely fixed—Richler talked to the Greens, the NDP and even the Liberals. After Chrystia Freeland’s by-election win as a Toronto-area Liberal MP in 2013, Richler met with the former journalist (now the federal minister of international trade), in part because her career trajectory was not dissimilar to his own. They had journalist friends in common too, and Freeland knew Noah’s sister, Martha.

The sense that Liberals, or at least some of them, are his kind of people socially if not ideologically, never quite leaves Richler. His own mother asks him why he’s not running for Justin Trudeau’s party. In one of The Candidate’s fantasy sections, Richler’s defeated opponent Carolyn Bennett — in real life the long-time Liberal incumbent who whomped all comers in the election and is currently minister of Indigenous and northern affairs — sends him a text from Parliament’s public gallery, calling him a “traitor to your class.” What Richler perceives as Liberal arrogance — he writes he felt his “hackles rise” when Freeland explains her decision to join the party by saying, “Justin has the brand” — alienated him as much as ideological differences: “I can’t stand the sense of entitlement,” he says, adding, in a dig at recent eye-popping ministerial moving expenses, “especially the use of public money.”

Besides, the NDP was interested in him, and had hit the right notes on the issues that mattered most to Richler: Aboriginal policy, which he considers “the most important question facing the country,” and the civil-liberties implications of the anti-terror bill C-51. By July 2015, after a lengthy vetting process, with Richler being upfront about what from his past might embarrass the party (serious teenage drug use) he was cleared to run.

The NDP, unable to detect a pulse of local candidate interest in St. Paul’s, perhaps because the party had never topped 23 per cent of the vote there, offered it, and Richler accepted, despite his qualms about being parachuted in. (He lives in Toronto’s Cabbagetown neighbourhood, a 20-minute bike ride away.) Richler had a boffo opening night, arranging for NDP eminence Stephen Lewis to speak at his nomination meeting, and raising $16,000 for a riding association which had $350 (“or thereabouts,” according to its treasurer) in the bank. “We had,” writes a pumped-up Richler, “a campaign.”

It wasn’t all downhill from there, but the political lessons came hard and fast, offered by often shell-shocked veterans or gleaned from experience. The days can be insanely long and the mood swings Trumpian. Everyone will believe they know better than you and won’t be shy in telling you about it after the fact. Fundraising is a constant soul-eating imperative — $16,000 was a good start, but estimates for a solid campaign began at $50,000. From somewhere came an ominous warning: “The Liberals start slow and then come on strong.” And this indisputable nugget: “90 per cent of your vote will depend on the leader’s performance in the last three weeks of the campaign.” Canadians, says Richler, who is troubled by it, have begun “behaving presidentially in a parliamentary system.”

Then there was the stuff he actually enjoyed, from making satirical videos to tossing barbs at all-candidate meetings to knocking on doors. To the surprise of his wife, House of Anansi publisher Sarah MacLachlan, Richler says, “I liked the canvassing” and the “engaging people” he met. Among them, all viewed with a writer’s eye as much as a politician’s, were a Persian man in a room crowded with 20 birds in cages, an elderly Italian couple with an unfathomable hydro bill, and a polite Tory ready to talk things over, at great length. (Richler, who was always willing to discuss the big picture, had trouble meeting the 30-seconds-per-door pace his campaign workers describe as “ideal.”)

At doors in social housing complexes, he discussed “muzzled scientists” — a surprisingly hot topic—and the long-form census, he says, “matters that never arose at tonier doors.” There, it was all the economy, and Richler comfortably engaged in discussions about how the NDP was going to raise the funds for its plans through judicious tax hikes and not by deficits. Comfortable, that is, until Trudeau, outflanking the NDP on the left, announced plans for a popular $10-billion deficit for infrastructure spending.

Inside the “cocoonish” world of an intense campaign, Richler didn’t at first see it — the Liberals coming on strong, that is — embroiled as he was in a much-ado-about-nothing social media storm. A polemicist with a sharp turn of phrase, Richler was bound to have written something of use to his political enemies, and he was informed, one day in mid-September, of three (apparently) toxic comments set to appear in newspapers.

Richler was angry, less at the attempted Internet shaming — clearly, he says, the result of Liberal “oppo” research — than with the to-ing and fro-ing between him and an apology-demanding party HQ. The national campaign, whose defensive and unimaginative campaign was grinding on him, was adamant that no mere cog in the machine should create a “distraction” for the leader. That was the same reasoning it used in squelching one of Richler’s videos, in which he literally kicks Harper out of his seat across from Peter Mansbridge and takes over the “interview.”

It was the lowest point in the campaign, the time Richler came closest to quitting, and inaugurated its final, dispiriting stretch. He was exhausted, once almost crashing his car, and saying now, “I felt the urge to.” He could feel the coming Liberal majority too, the “brand” winning big. He recalls when he admitted it to himself, at a debate on Aboriginal issues: “I declared the chief of the Assembly of First Nations should be in cabinet. The moment I said it, I knew I had thrown in the towel.” The reason he carried on to the end is much the same as why soldiers keep fighting — for the sake of their comrades. Richler was impressed and “very touched” by his campaign volunteers, with whom he formed an ad-hoc tribe, made not of people like him, but people who think like him.

Would he do it all again? A reader could be forgiven for thinking, not a chance, given all the bridge-burning in the book. But there were highs as well as lows, and the dice can always land differently. The candidate may yet be seen again.