It would be a mistake for the continent to shut itself off from an integrated global economy, say Three Amigos 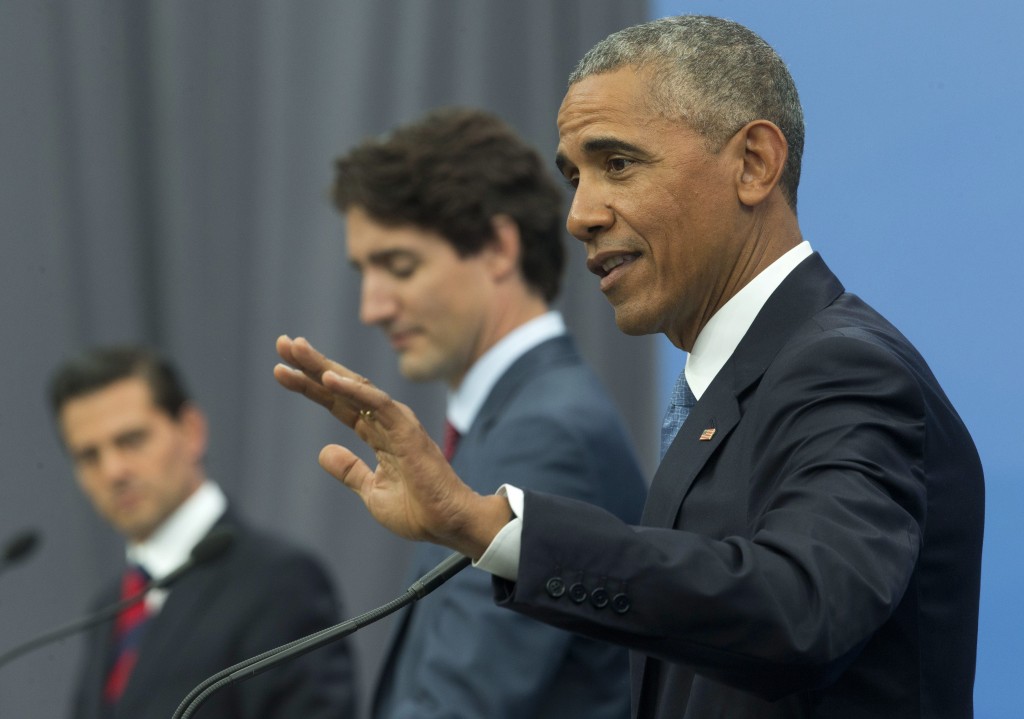 Prime Minister Justin Trudeau, U.S. President Barack Obama and Mexican President Enrique Pena Nieto all said it would be a mistake for the continent to shut itself off from an integrated global economy.

But Obama in particular noted that free trade also needs to be fair trade, and countries need to take steps to ensure that prosperity continues to flow to all of their citizens.

Trudeau said it’s one of the key themes of the North American Leaders’ Summit, to highlight how trade and international agreements are good for global economy and for people around the world.

He said countries that export more of their goods to markets around the world are wealthier, and citizens are able to share in that growth.

Obama said it’s too late to try to prevent the integration of national economies into a single global entity, because it has already happened.

“The question is not whether or not there’s going to be an international, global economy – there is one,” the president said. “Under what terms are we going to shape that economy?”

Earlier Wednesday, Pena Nieto offered a sharp rebuke of the protectionist forces north of his country’s border and in Britain.

His anti-isolationism message came one day after he and Trudeau trumpeted their bilateral relationship as a model of political and economic co-operation.

They presented the Canada-Mexico relationship as a sharp contrast to the growing strains of protectionism and isolation sweeping the United States and Britain, with its referendum decision to leave the European Union – a theme the Mexican leader placed squarely on the agenda of the summit.

“The world is teaching us lessons,” Pena Nieto said in Spanish at the end of his meeting with Obama, which preceded the three-way talks.

“We need to be very clear in terms of describing the benefits of being an integrated region. Jobs are created, companies are incorporated, trade is free and more development can reach people due to regional integration. Isolationism is not a route towards progress; integration is.”

He said the Obama administration and his government have stressed “the importance and the relevance that working as a team” and standing together.

Obama praised the U.S. relationship with Mexico on a number of fronts, including their shared membership in the 12-country Pacific Rim trade deal, the Trans-Pacific Partnership, which also includes Canada.

“All too often hearing rhetoric that ignores the enormous contributions … by Mexican-Americans and the enormous strengths that we draw from the relationship with our good neighbour to the south,” Obama said.

Trump said he would inform Mexico and Canada of his desire to immediately renegotiate a more favourable deal and if they refused significant concessions, he threatened to withdraw from it all together.

As Obama was winging his way to Canada, White House spokesman Josh Earnest played down the remarks, saying NAFTA has already been renegotiated in the form of the TPP.

“It includes, obviously, countries in the Asia Pacific as well, but it includes Canada and Mexico and it raises standards related to the environment and to labour conditions in all of the countries that have signed the agreement,” Earnest said.

“It also makes those higher standards enforceable in a way that they weren’t in NAFTA. So the president promised in 2007 and 2008 _ this got a lot of attention _ that he would work, that he would engage with our partners to make changes to those agreements to make them more fair to U.S. workers and the broader U.S. economy. That’s exactly what we’ve succeeded in doing.”

Trump also made it clear Tuesday he’s no fan of the TPP either, calling it “a continuing rape of our country.”

Earlier, Trudeau greeted Obama with a warm hug Wednesday before the two sat down with Pena Nieto to begin the summit in earnest. Obama praised the setting _ the locked-down National Gallery of Canada _ and fondly acknowledged the Mounties clad in red serge that helped greet him.

“It’s good to see Mounties around,” the president said. “It always makes me feel safe.”

Indeed, security was an ever-present theme throughout the morning as the iconic Boeing VC-25, better known as Air Force One, touched down at the Ottawa airport for what is widely expected to be Obama’s last visit to Canada as president.

He was greeted by Governor General David Johnston, Foreign Affairs Minister Stephane Dion and a large group of officials and dignitaries.

A towering convoy of black limousines and SUVs – including the heavily armoured presidential Cadillac nicknamed “The Beast” – ferried the president to the National Gallery of Canada, not far from Parliament Hill.

The Mexican president, who has been on a state visit to Canada since Monday, is to sign on to a Canada-U.S. pledge to cut methane emissions 40 to 45 per cent below 2012 levels by 2025.

North America accounts for about 20 per cent of global emissions of methane, a potent greenhouse gas that the Pembina Institute estimates accounts for a fifth of all man-made global warming to date.

The trio will also announce plans to achieve 50 per cent clean power generation across North America by 2025, including renewable energy, nuclear power, carbon capture and storage and increased energy efficiency.

Canada has over 80 per cent clean electricity generation, by that measure – North America as a whole is at 37 per cent – meaning the plan could put Canada in a lucrative position to export more power to the U.S.

Obama was to have his own bilateral meeting with Trudeau before capping his day-long visit to the national capital with an address to Parliament.

On Tuesday, Trudeau and Pena Nieto cleared away long-standing trade and travel irritants: Canada will lift its controversial visa requirement for Mexican visitors before the end of the year while Mexico will end restrictions on Canadian beef imports.