Notley tried to win the debate by making Kenney a loser. It didn't work. 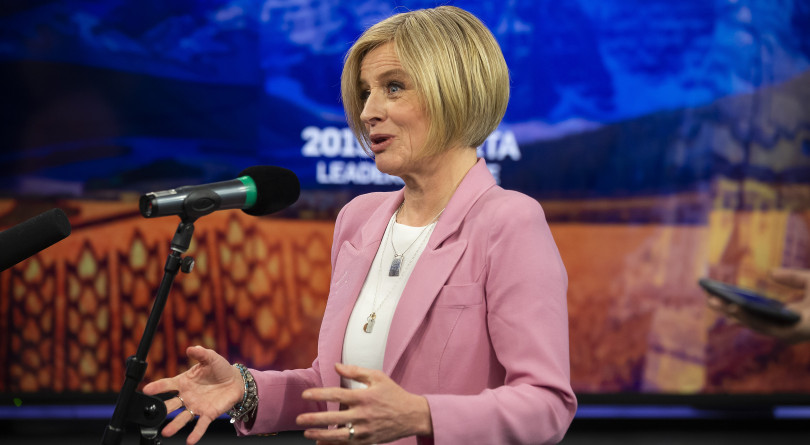 There was a bounce in Jason Kenney’s step as he strode to face reporters after the 90 televised minutes that safeguarded his United Conservative Party’s tidy lead. “I’d like to do another hour!” he proclaimed in a chipper voice.

Rachel Notley had brought a whole other sort of chipper to the Alberta election’s lone leaders’ debate, and continually tried to shove her rival’s limbs and head through its gnashing blades. Kenney avoided being drawn in, kept his cool, and emerged intact and unbloodied.

He suffered a far rougher thrashing a night earlier at the hands of conservative talk radio host Charles Adler, who subjected Kenney to an hour of brutally personal questions about his views on abortion and gay rights, and about a veritable Standing Committee full  UCP candidates who’ve said odiously regressive things about various minority groups. Thursday’s debate was never going to be solely devoted to social issues, and Adler wasn’t the moderator. That widely shared and awkward interview performance by Kenney surely made anything else—dental surgery, radical feminism symposium—seem to him breezy fun by comparison.

Notley’s 2015 election victory was sealed with her solid debate showing and Tory premier Jim Prentice’s woeful attempt to say the lady can’t do math. The NDP had hopes of forcing Kenney into some sort of error, like Lucy yanking away the football from Charlie Brown at the last second. He could anticipate that trick from 20 yards away. On this night, Kenney showed why he has a reputation for Jesuitical discipline and preparation that borders on obsessive. He carefully avoided even mentioning his key opponent by name; he referred to her as the premier, which conferred a degree of respect while reminding UCP supporters that they really don’t want her to remain premier. The Kenney campaign flew Conservative MP Michelle Rempel home to Alberta to be Notley’s stand-in during debate rehearsals, so he’d have some practice squaring off with a diminutive female prone to sharp-tongued jabs.

Notley again proved deft at delivering nifty scripted lines, like this populist bit on corporate taxes: “Do you want to pay for a tax cut for your boss by freezing your kids’ education and freezing your loved one’s health care?” Kenney, however, showed he’s the superior improviser. He pivoted to say that Notley’s quip was business-bashing. Later, when Notley said his plan to scuttle her plan to lease oil-hauling rail cars would kill jobs, he twisted it against her: “You’re the expert in killing jobs in downtown Calgary.”

Kenney’s non-loss was also aided by two bits of luck: that the longshot Liberal leader David Khan was given the lectern between Notley and him, and that voters favour UCP positions over the NDP’s on the first three subjects of the debate: federal relations, budget deficits and pipelines. Notley and the other two centrist leaders hammered away at Kenney’s intellectual dishonesty over his threats to somehow wreak havoc on the federal equalization system, and his apparent plans to generate  something like 45,000 legal and paralegal jobs in Alberta by variously suing the Liberals and environmental groups. But many Alberta voters seem to want a premier who will fly to Ottawa with a giant, spiked club hidden in their checked luggage—and naysayers are simply rational weenies.

To her credit, Notley waited a whole six or seven seconds during her opening statement before kicking at the frontrunning Kenney, and pivoted quickly at each opportunity to that message all evening. Kenney aimed to spend most of the debate explaining what he wants to do with Alberta. She also spent most of the debate explaining what Kenney wants to do with Alberta. Her party recognizes that the only way to shake loose Conservative votes is to further sap confidence that he’s a credible leader in a modern Alberta, and New Democrats will likely rely during the campaign’s last 12 days on further “bozo eruptions” to erode the UCP lead. The words Conservatives themselves utter are far more damaging to their cause than most of what Notley can say.

In her closing, Notley began to sound like she might finally deliver an effective pitch to on-the-fence conservative voters who don’t trust the NDP on the economy, yet recoil at the thought of having the least gay-friendly government in the province since the early years of this century. “In Alberta we can grow the economy, build the pipeline, create jobs and not sacrifice who we are. Because who we are is the source of our strength,” she began. “In Alberta, it doesn’t matter where you came from, who your parents are, to whom you pray or who you love.”

That final line, though, is exactly the sort of well-meaning cliché Kenney had used earlier in the night to describe his approach. Just as Kenney had anticipated many of her manoeuvres, Notley should have seen it coming.

Graham Thomson: “Notley, as expected did well, but at times the smile on her face didn’t match the venom in her anti-Kenney words. Kenney, who has been preparing for this debate since he first stepped into provincial politics three years ago, performed as expected. This, even though he was clearly irritated when his carefully scripted talking points were drowned out by the others’ crosstalk. He survived. If he is indeed the front-runner that’s all he had to do.” (CBC)

Elise Stolte: “I was looking for sparky and inspiring. (Notley) was just OK. She came across as reasoned but more focused on pulling down the UCP than delivering exciting new ideas. Her strongest quotes were all negative, outlining why voters should not choose the UCP. She suggested the UCP plan is akin to paying for a tax cut for your boss by ‘freezing your children’s education and freezing your loved one’s health care.’” (Edmonton Journal)

Keith Gerein: “While Kenney didn’t do much to make himself come across as more likeable or alleviate the controversies plaguing the party, he at least seemed to weather the storm Thursday without any significant further damage. He also seemed to get stronger and more confident as the debate went on, and supporters were likely pleased at his attacks on NDP Leader Rachel Notley’s pipeline record and his rhetoric about getting tough with Ottawa.” (Edmonton Journal)

Janet Brown: “(Kenney) came out of the gate way more aggressive than I thought he would. He certainly was playing to character. He wasn’t trying to be nice. But at the same time, he didn’t come off as this sort of evil genius, this crazy radical that Albertans need to be afraid of.” (CBC)

Don Braid: “They all lumped themselves together in the drawer labelled Conciliatory. Kenney was left with the clear ownership of Alberta anger, one of the most powerful themes of this campaign. He repeated his calls to dump the carbon tax, sue protest groups, help defeat Justin Trudeau, etc. Kenney seemed distinct. That’s exactly what he wanted. As the others cordially shook hands at the end, he stood alone for a moment, looking pleased with himself.” (Calgary Herald)

Rick Bell: “This is 2019 where the premier needed a knockout again — more than ever. She needed to be able to show Albertans Jason Kenney is the monster she’s talked about every single day and many times a day during this Texas Death Match of an election campaign. She didn’t. Far from it. Only the diehards and the delusional will think Notley somehow pulled off some great victory Thursday night.” (Calgary Sun)

Danielle Smith: “Both @jkenney and @RachelNotley did well – certainly enough to maintain base support.” (Twitter)

David Akin: “Gotta say: I am shocked at how poorly @RachelNotley is performing in the #abvotes debate. I have long considered her to be one of the strongest politicians in Canada. Not tonight.” (Twitter)

Dave Cournoyer: “Anyone who was hoping to see a battle of the titans during tonight’s #abdebate surely will have been disappointed. This debate was mostly forgettable and I’m not convinced it moves the dial on anything.” (Twitter)

Madeline Smith: “Muted applause at this NDP watch party. The mood in here is a bit more subdued than the watch parties probably were in 2015, post-‘math is hard’ slam dunk. Not sure any of those moments came for Notley tonight.” (Twitter)