'It is time to start thinking more charitably about Alberta,' premier says of debate around the Leap Manifesto 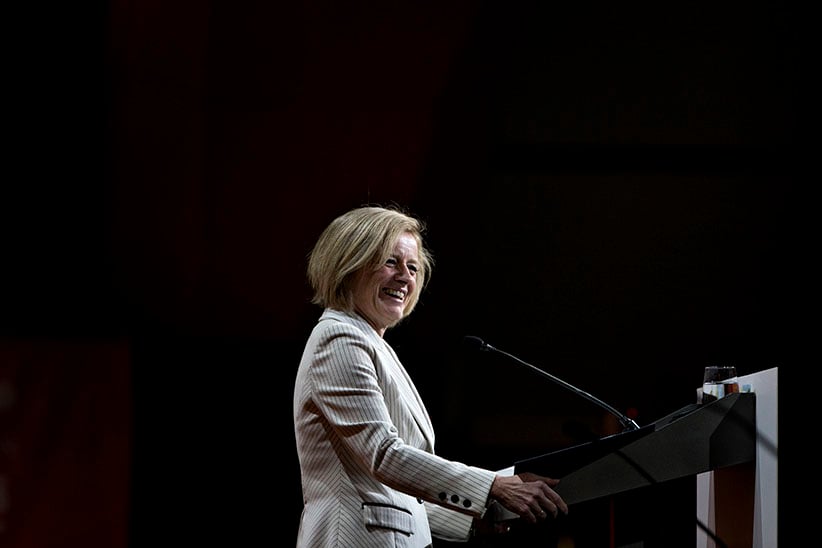 Tom Mulcair has struggled to lift and unite the NDP as a government-minded pragmatist in a party thick with idealists. With her speech Saturday at the federal convention, Alberta’s Premier showed that pragmatic leaders who actually win can fare much, much better.

This writer lost count of standing ovations during Rachel Notley’s triumphalist, pro-pipeline speech, but it set a probably impossibly high bar for Tom Mulcair’s address Sunday before his leadership vote. A Notley supporter put it at 13 standing o’s, though her lines of pipeline advocacy fell well short of getting the packed house to its feet.

The premier and her team had telegraphed her In Defence of Alberta Oil speech for days, with Deputy Premier Sarah Hoffman’s jab at Mulcair, her own “yes to a pipeline” TV address, and Environment Minister Shannon Phillip’s suggestion that the deep-green Leap Manifesto amounted to a “betrayal” of Alberta. But it appeared Notley’s convention speech was set to position her as the good cop, because she wouldn’t be speaking to reporters afterwards and Hoffman would face the cameras instead.

This wasn’t much of a good-cop speech. It was more of a cry from a NDP leader who lives in the world of government and declining revenues and compromise — a shot from the more successful leader of NDP’s pragmatic wing to the idealist camp, with a direct shot at activists’ Leap push.

“We’re acting, really acting, on the basis of a concrete plan that is actually being implemented,” Notley told the crowd. “That is what you get to do when you move up from manifestos, to the detailed, principled, practical plans you can really implement by winning an election.”

Those lines got a hearty reaction. The Alberta wing fears too many will support an accelerated move away from the fossil-fuel economy with a strong endorsement of Leap on Sunday. Notley argued in her speech that there are many thousands of jobs in this province that rely on the oil and gas sector, and pipelines. “It is time to start thinking more charitably about Alberta and the 4.4 million fellow Canadians who live here,” she said.

Her direct plea for NDP support of “pipelines that are built by Canadians, using Canadian steel” got a tepid response, but the party faithful did rise when she touted her government’s climate plan. She argued against “voices in our party who want to wave all this away” and effectively scare voters into the arms of Conservatives. (She had to steer clear of Liberal-bashing, given that she’s fostering with Prime Minister Justin Trudeau a rather constructive relationship.)

With the likely demise of Manitoba’s NDP government later this month, Notley is the NDP’s last best star, in a party with few other shimmering success stories. She offered a pep talk on a rather sullen, nervous weekend for the orange-button crowd. Hey, Notley reminded them: Alberta’s NDP was reduced to zero from 16 seats in the 1993 election, and in 2015 won a majority government. One imagines the federal New Democrats would rather not have to devise a 22-year roadmap to power — I mean, come on, nobody thinks Trudeau is that popular. But there are reasons beyond Notley’s charisma and ability to charm a convention hall that she’s the big celebrity this weekend. The NDP premier of Alberta is the beacon of hope amid the bleakness, the living message that it’s not foolish to believe in the unbelievable. 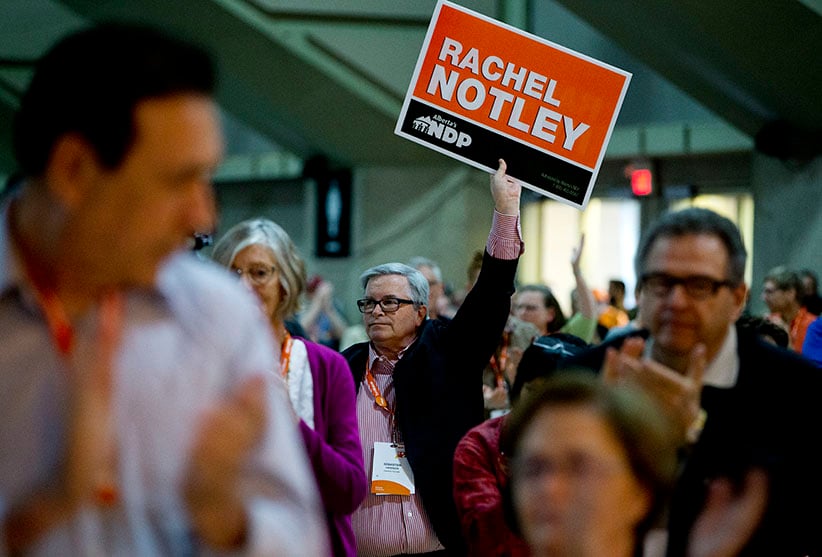 Supporters applaud Notley during her speech. (Jason Franson for Maclean’s.)

But the unbelievable can’t be the unreasonable, Notley stressed. It’s unclear if party activists will broadly embrace the Leap manifesto on Sunday, or if Notley helped push Avi Lewis’ document aside, or if the Alberta camp can live with a broadly approved Leap agenda and then work to make sure the NDP doesn’t go off what Notley’s team would deem the anti-pipeline deep end.

Buttons saying “NDP + Leap Manifesto” are rather popular here at Edmonton’s Shaw Conference Centre. Mary Nokleby had one on, and she calls pipelines “snakes” heading to foreign markets. “She’s on the inside. We’re on the outside,” Nokleby said of her premier’s remarks. (Oh, and Nokleby’s a Calgary delegate, a reminder that not even the 344-delegate Alberta contingent is a solid block here.)

Others understand Notley’s urging about the need for a segue toward a sustainable economy, but point out that Leap doesn’t bid to leave oil in the ground right away. It actually calls for a 100-per-cent clean economy by 2050, which theoretically leaves some decades still to go for Fort McMurray, a town some Notley supporters wish this convention was actually hosted in, to give visitors a better sense of the current economic crisis.

Notley did no favours to Mulcair in her speech, mentioning him only once in regards to his “hard work” during the federal campaign. In the next breath, Notley offered sympathies to Saskatchewan NDPers who badly lost last week’s election along with leader Cam Broten’s seat. That’s not great rhetorical company to put Mulcair in.

It fell to Hoffman, the deputy premier, to handle a question about whether Alberta’s leaders support a federal leadership review. “Tom Mulcair asked that the question be answered by the membership,” Hoffman told reporters, offering little charity. “The membership will answer that question tomorrow and we’ll have a much clearer idea of the future of Tom Mulcair after that.”

Yes, they will. For the many party members looking beyond Mulcair’s review and considering what they want in their next leader, Notley’s sunny pragmatism and compelling speech probably helped craft their wish list.