McNeil needs to hold on to ridings in metro Halifax for the Liberals to win a second straight majority. 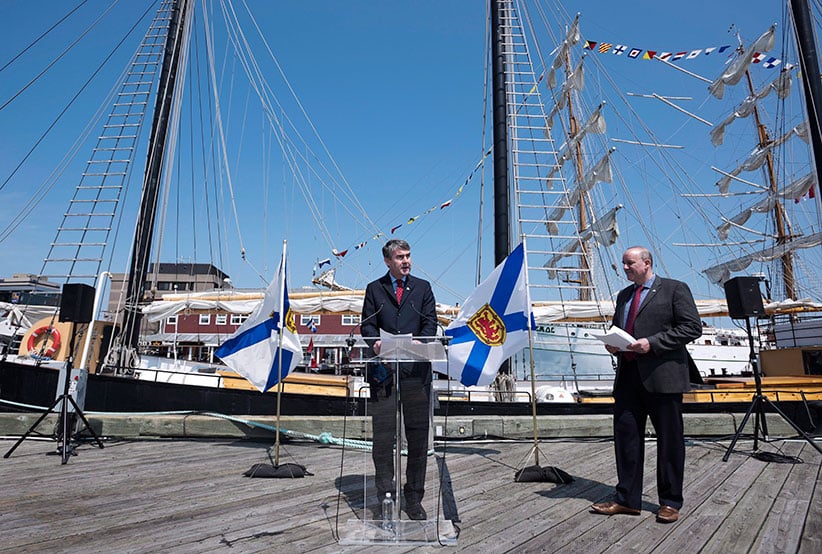 Nova Scotia Premier Stephen McNeil, left, announces that Halifax will be a 2017 Tall Ships Regatta venue coinciding with the province’s Canada 150 celebration during a press conference on the waterfront in Halifax on Friday, May 13, 2016. (Darren Calabrese/CP

HALIFAX – Nova Scotia Premier Stephen McNeil has called a provincial election for May 30, seeking a second consecutive mandate from voters.

McNeil dropped the writ this afternoon after meeting with Lt.-Gov. J.J. Grant at Government House in Halifax.

“I encourage all Nova Scotians to exercise their democratic right to vote,” he said in a statement issued by the government before he headed to a party rally at a Lebanese cultural centre.

At dissolution the Liberals held 34 seats in the 51-seat legislature, the Progressive Conservatives had 10 and the NDP 5.

There was one Independent and one seat was vacant.

The election follows nearly two months of election style spending announcements by the Liberals and a budget tabled Thursday offering a broad, though modest tax cut to about 500,000 low and middle income Nova Scotians.

On Friday McNeil said that his three-and-a-half year-old government, which was elected in October, 2013, would run on its entire record and not just on what was tabled in the budget.

“I’m proud of the work we’ve done, we’ve had to make some difficult decisions. I think Nova Scotians have respected that.”

McNeil defended a record that saw his government exercise strict wage restraint for public sector unions, including nurses and teachers, while it made a series of cuts to programs affecting areas such as seniors’ long-term care and initiatives run by public service organizations.

It resulted in consecutive balanced budgets for the Liberals in the past two years, although McNeil said Friday any idea that the government hadn’t been spending over its mandate “simply wasn’t accurate.”

“We haven’t been saying no for the past three years,” he said. “We invested in home care, we invested in education and we continue make investments as a government.”

McNeil did concede however, that there was still more work to do to address doctor shortages, after promising a family doctor for every Nova Scotian during the last campaign.

It’s an unfulfilled promise the Progressive Conservatives and the New Democrats are certainly expected to hammer hard on as the campaign unfolds.

Tory Leader Jamie Baillie has been sounding confident that his party, which last held power following the election of 2006, is poised for an electoral breakthrough.

That’s critical for Baillie, who is leading the party for a second time through an election and may not get a third opportunity if expectations aren’t realized.

“We believe we have a vision for where to take this province and a plan of action to make lives better for people,” said Baillie.

He said his party also planned to turn the election into a referendum on McNeil’s leadership. Baillie said the Friday premier’s performance in dealing with public sector unions had not gone unnoticed by the public.

“When they see their provincial leader push people around, tell them they’re greedy, confront Nova Scotians who are working whether they are in health care or in our schools, that leaves scars. We need a style of leadership that brings people together and that’s what I’m taking to the people.”

Gary Burrill is embarking on his first election campaign as NDP leader. He will be seeking a seat in the Halifax Chebucto riding, while reviving the fortunes of a party that had a dramatic fall from grace in 2013, when it was swept from government by the Liberals.

“We’re ready to go,” Burrill said Friday. “The commitments we have been talking about for months, about the need to move towards investment instead of a policy of retrenchment and of zeros, we’re ready to go with a platform of this.”

The election call comes after spring polling that indicated the Liberals had fallen in popularity, although they were still in majority territory as of March, according to Cape Breton University professor David Johnson.

Decided voter support for the Liberal party dropped from 56 per cent to 44 per cent, according to a survey of 1,210 adults conducted by Halifax-based Corporate Research Associates Inc. The Progressive Conservatives stood at 28 per cent, up eight points, and the New Democrats were at 23 per cent, up from 19 per cent, while five per cent supported the Green Party.

“They are pretty much back to where they were in 2013,” Johnson said in an interview last month.

“Forty-four per cent will win them a strong, healthy majority government if that number hold up during the election campaign.”

Johnson said the key would be holding onto ridings in metro Halifax.

“The Liberals dominate metro (currently) and whomever dominates metro, that’s the pathway into a majority government,” he said.