Obama leaves the White House with words of hope

'This is not a period, this is a comma in the continuing story of building America,' Obama tells supporters 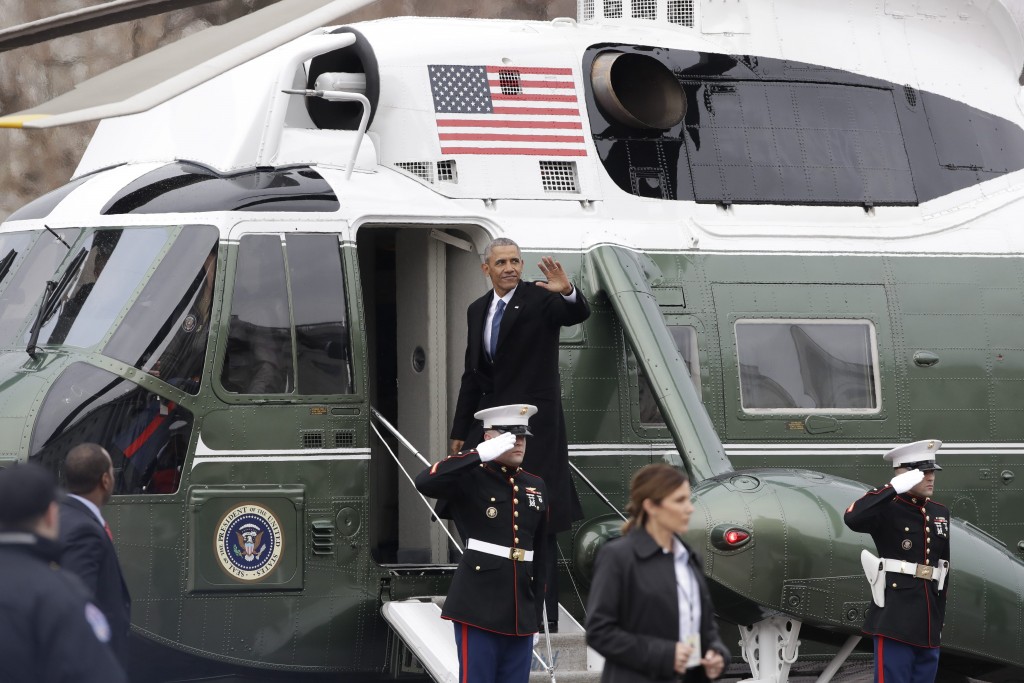 Former President Barack Obama waves as he prepares to leave the East Front of the Capitol after the inauguration of Donald Trump in Washington, Friday, Jan. 20, 2016. (AP Photo/Evan Vucci)

WASHINGTON – Closing out a barrier-breaking chapter in history, former President Barack Obama left the White House on Friday much the way he entered it eight years ago: insisting Americans have reason for optimism despite the national sense of unease.

He was gracious to President Donald Trump to the end, warmly welcoming his successor to the home where he raised his daughters. Yet to those fearful about Trump’s presidency, Obama suggested it would be a mere blip.

“This is just a little pit stop,” Obama told supporters just before departing Washington. “This is not a period, this is a comma in the continuing story of building America.”

Obama leaves the national stage as a widely popular figure, with his poll numbers approaching 60 per cent. He’s being replaced by the least popular president in four decades, polls show – a reality on display in Trump’s low-key inauguration. On the National Mall, far fewer showed up than the throng that attended Obama’s 2009 inauguration, and some protesters downtown hurled bricks and broke windows in a show of defiance. Many others demonstrated peacefully.

Left unspoken in Obama’s final hours was the unpleasant reality that his successor has pledged to reverse much, if not most, of what he accomplished. That has raised the prospect that Obama’s major lasting legacy may be as a cultural icon: the first black president, who ushered the country into a new era in which gays can marry, marijuana is legal in more places than ever and white people will soon be a minority.

Yet inside the White House, the Obama imprint that once appeared indelible suddenly seemed more fleeting. Photos of him and his family were taken down from the walls, leaving big, white voids that seemed to beckon the new president to make “the people’s house” his own.

Obama’s staffers left one reminder on the wall near a West Wing entrance: a collection of newspaper front pages from Obama’s proudest moments, including the day he signed the Affordable Care Act and the day the Senate confirmed his nomination of the first Hispanic Supreme Court justice.

Speaking to his former aides at Joint Base Andrews after Trump’s swearing-in, Obama sought to reassure those who toiled on his behalf that it was all worth it, no matter what Trump might do. He said his supporters had defied the skeptics who “didn’t think we could pull it off,” invoking themes from his campaign.

“You proved the power of hope,” Obama said.

If there were hard feelings toward Trump, Obama didn’t let on. He sat stoically as Trump, in his inaugural address, offered a bleak assessment of the state of the country after eight years of Obama’s leadership.

And at the White House, he and Mrs. Obama tried to gently coach Trump and his wife on the mechanics of presidential pageantry. When Melania Trump presented Mrs. Obama with a gift just as they were expected to pose for photos, Mrs. Obama looked left, then right, for someone to hand it to before Obama himself eventually walked it to a nearby aide.

On his last day in office, Obama left a letter to Trump in the Oval Office, in keeping with presidential tradition. He signed one last bill, codifying a government fellowship program he’d created, and was given a gift by the residential staff: a pair of flags that flew above the White House on the first and last days of his presidency.

Vice-President Joe Biden accompanied the Obamas and the Trumps to the swearing-in, then departed Washington, in his characteristically down-home style, by Amtrak train. Obama and his family headed to a vacation in California on the presidential plane, stripped of the Air Force One moniker as it ferried the now-former president for the last time.

When Obama took office in 2009, few Americans had an iPhone, which had just been introduced. Nearly 49 million Americans had no health insurance, a number that’s fallen to 28 million. Unemployment, now 4.7 per cent, was nearly 8 per cent and climbing. The national debt was about $10.6 trillion, and has jumped under Obama to just under $20 trillion.

His presidency started with a burst of legislative activity – the economic stimulus, his health care overhaul – that he would never again be able to replicate. Partisan resistance to him quickly hardened, and by the time his second term started, Obama had mostly assented to the reality that his best hopes to accomplish anything were through executive action and foreign policy.

The next time voters had their say, they chose Obama’s opposite.

But Obama tried to stay optimistic until the very end, even as former staffers hoisted their children on their shoulders to see him off.

“Michelle and I, we’ve just been your front-men and women,” Obama said. “We have been the face, sometimes the voice, out front on the TV screen in front of a microphone, but this has never been about us. It has always been about you.”