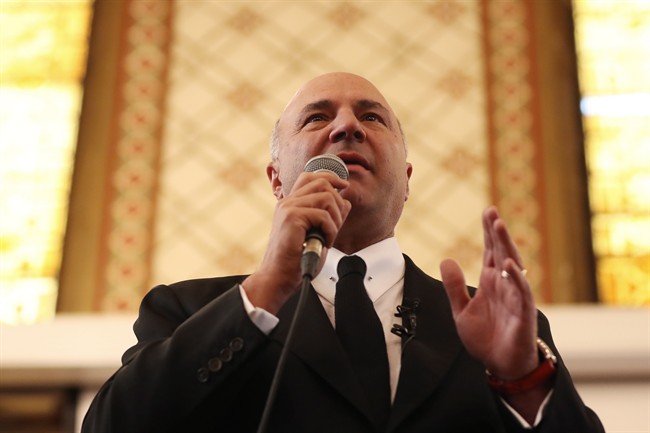 OTTAWA – The presumed front-runners in the federal Conservative leadership race are going for each other’s jugular, with Maxime Bernier dismissing Kevin O’Leary as a “loser” after the celebrity businessman levelled accusations of fraud and vote-rigging.

O’Leary issued a statement late Thursday accusing an unidentified campaign of trying to buy its way to the top by using untraceable prepaid credit cards to sign up “fake” party members without their knowledge, contrary to party rules.

Sources say Bernier’s campaign is the alleged culprit; the party is now investigating the allegations.

But Bernier fired back Friday, pulling no punches in a bluntly worded fundraising email to party members.

“Kevin O’Leary is a loser. I’m a winner,” Bernier said.

“He knows my campaign has raised more money, signed up more members, has more supporters and more volunteers. He’s a bad candidate. Instead of trying to win people over by putting out a platform, he’s throwing mud to try to save his campaign.”

While he’s been building “an army of supporters,” Bernier said O’Leary has been “vacationing in Florida, filming in L.A. and shilling on a home shopping channel trying to sell his line of O’Leary wine to American buyers. It’s not even available in Canada.”

O’Leary, meanwhile, issued his own statement in an attempt to enlist the other candidates in his fight against what he says is a fraudulent membership scam concocted by “sketchy insiders.”

“I applaud the Conservative party for launching an investigation, but that is not enough,” he said.

“Today, I am asking the 13 other candidates to put politics aside. I am calling on you to join together with me to fight back against this scam by demanding the party throw out these falsified memberships.”

RELATED: Is Kevin O’Leary really serious about his promises?

Several people who are part of Bernier’s campaign team were also involved in Patrick Brown’s winning campaign for the provincial PC leadership in 2015.

The Conservative party on Thursday requested the credit card logs of each campaign and party spokesman Cory Hann said an investigation is underway.

Any memberships obtained contrary to party rules will be cancelled and those people will be ineligible to vote, Hann said in an email.

“Our rules are clear, any person looking to join our party must do so by paying the membership fee out of their own pocket and we will ensure that principle is followed,” he said.

Memberships cost $15 and party rules state they can only be purchased by credit card or cheque, a provision implemented specifically to avoid campaigns being able to use their own funds to sign up thousands of members, as had been the practice in the past.

The new system drew grumbling when it was unveiled, with some saying the fee – originally set at $25 – was still too high and the credit card process too cumbersome.

OPINION: The Tories approach a point of no return

A couple of hours after the allegations surfaced Thursday, Bernier made a point of telling a would-be supporter on Twitter that his mother’s credit card wasn’t good enough to pay for a membership.

“You need to pay with your own card,” Bernier told the man via Twitter.

Brad Trost, one of the 14 candidates in the race, called on O’Leary to provide proof of his allegations.

“If Mr. O’Leary has evidence to substantiate this hack he should make it public immediately,” Trost said in a statement.

“If this is nothing but a publicity stunt and Mr. O’Leary has no evidence, then he should be sanctioned to the greatest extent possible by the party.”

There are believed to currently be about 100,000 party members, with more to come, as candidates have until Mar. 28 to sign up new ones for the leadership vote. That’s scheduled to take place in May.