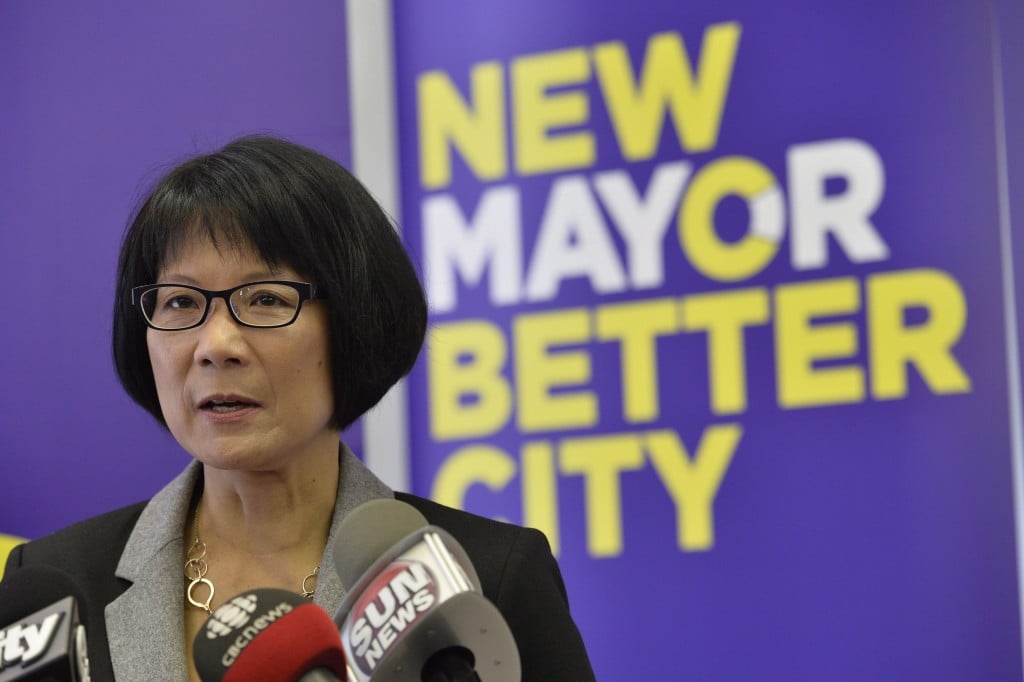 I walked into Toronto’s Sherbourne Station yesterday after work, and found its front doors guarded by mayoral candidate Olivia Chow’s purple-clad supporters. They hawked their newest pamphlets, the cover of which featured a stoic Chow standing in a generic city park. I’m a voter, so I grabbed one.

Two weeks out from the Oct. 27 municipal election, former frontrunner Chow is trailing badly in every poll, enough to worry even the most ardent poll skeptics among her loyal fans. This late-stage campaign literature has to win hearts and minds, and it has to win them quickly. Five parts of Chow’s increasingly desperate pitch that stand out: 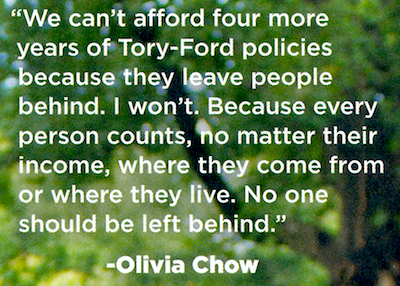 Chow is a New Democrat, and one of her party’s favourite pastimes is lumping Liberals and Conservatives into the same mould: traditional, uncreative, tiresome. You hear the chant during elections across Canada, and even in between: “Liberal, Tory, same old story.” In Toronto, Chow faces two conservative opponents. John Tory’s campaign features plenty of Liberals and Tories in the backroom. Doug Ford’s father was an outspoken Tory MPP, and Ford has dreamed of taking a seat at Queen’s Park under the same banner.

Chow wants to paint the two contenders as one, and she hopes to simultaneously paint them as “unaffordable.” Wait a second. A social democrat questioning the affordability of two opponents with long records of fiscally conservative rhetoric? Including a Ford who’s hell-bent on low taxes and small government? Much as the Ford brothers’ record in office doesn’t match their consistently debunked claims, Chow’s uphill battle is the same as every left-leaning candidate: shed a perceived reputation as a high-spending maniac and replace it with a fiscally conservative plan treasured by so many voters.

This variation of all for one and one for all is not a new concept. The most heroic of military commanders always solemnly pledge to leave no soldier on the battlefield. One example from Hollywood, among millions, is this:

But there’s another home for Chow’s pledge of inclusivity.

Remember our proud history of social justice, universal health care, public pensions and making sure no one is left behind. Let’s continue to move forward. Let’s demonstrate in everything we do in the four years before us that we are ready to serve our beloved Canada as its next government.

That’s the late Jack Layton, Chow’s husband, writing in his last letter to Canadians. Layton also drew on that language during his first federal campaign as NDP leader in 2004. Whether deliberate or happy accident, that kind of parallel to a downtown legend of Layton’s calibre, and the man with whom Chow lived her public life, won’t hurt her chances among the urban hardcore that she needs to sweep on election night.

Rob Ford is a simple talker. Doug Ford is a simple talker. With easy-talking opponents like the Fords, Chow must speak to the common man. She didn’t “accomplish her objectives.” She didn’t “execute her plan.” She didn’t “achieve” anything. She “got things done.” Chow and Ford are two candidates racing into the arms of the working class, each hoping that Tory’s lifelong wealth and propensity for complex sentences turns off legions of mythical voters who drink Tim Hortons, talk about the game last night, and just want their politicians to be straight with them. 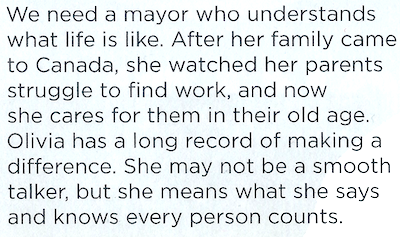 The Ford brothers may have spent four years with their feet in their mouths, but they talk slickly to the loyalists that comprise Ford Nation. John Tory hosted a popular news-talk show on a Toronto radio station, the culmination of a career in public life and in front of microphones. Chow’s delivery, passionate though it may be, is not as smooth as her opponents. Chow’s team hopes that admitting as much, and spinning it into a strength, will pay off in the campaign’s final stretch. Rare, though not unprecedented, that a politician shows off her lack of flair at a podium.

5. This campaign material brought to you by Unifor Local 591G.

Hidden in the corner of the pamphlet is the seal of the union that produced it: Unifor Local 591G (formerly CEP Local 591G). New Democrat staffers on the Hill, including Chow’s former assistants when she was an MP, recently disaffiliated from Unifor, which doesn’t exclusively support New Democratic candidates who run for office. The same group of staffers, the only unionized partisans on the Hill, were affiliated with the Communications, Energy and Paperworkers Union before its merger with the Canadian Auto Workers. The CAW also refused to endorse only NDP candidates, and former national president Buzz Hargrove campaigned with former prime minister Paul Martin in 2006. That another Unifor local is working with the Chow campaign demonstrates simply that organized labour is not of one mind, despite what anti-union Conservatives might spout in the House of Commons.