"It drives me nuts," says Kish. "Comments like that make us go backwards." 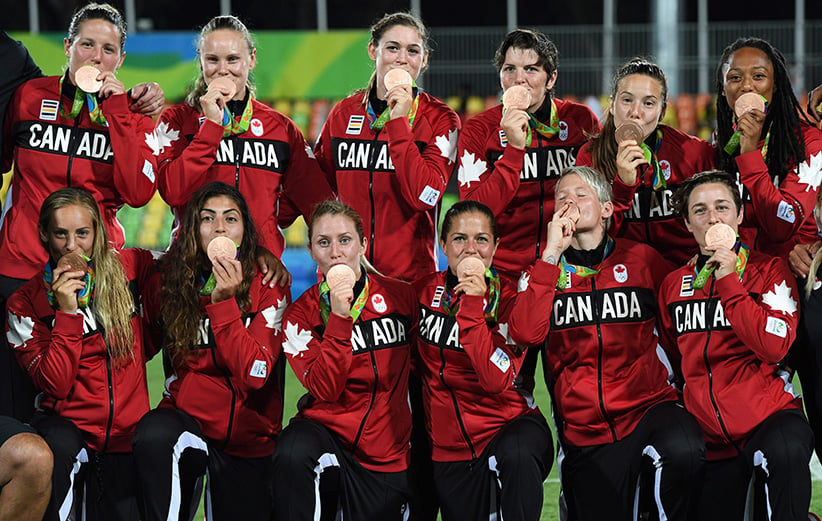 Canada celebrates their win for bronze over Great Britain in women’s rugby sevens at the 2016 Olympic Summer Games in Rio de Janeiro, Brazil on Monday, Aug. 8, 2016. Team captain Jen Kish is in the bottom row, second from right. (Sean Kilpatrick/CP)

EDMONTON — One of Canada’s Olympic medallists is calling out Alberta’s Opposition leader for a comment about physically assaulting Premier Rachel Notley.

“We want the world to grow in the right direction. We want to set a good example for the younger generation.

Kish was one of many critics denouncing the remark made by Wildrose Leader Brian Jean at a town hall meeting in Fort McMurray on Tuesday night.

Jean was responding to concerns and complaints about the level of seniors care and housing.

“Let’s be honest. I’ve been beating this drum for 10, 11, 12 years now, so I will continue to beat it. I promise. But it is against the law to beat Rachel Notley, so …” he said before being cut off by laughter and applause.

Moments later, Jean backtracked, saying the premier has been accommodating on the issue by switching the policy of the previous Tory government.

“Now, I have to compliment that woman and I shouldn’t have said what I said because I truly admire her for that,” he said.

“That was a very practical thing and not necessarily in her best interest, because she could have easily just let that go as it was and blamed the previous government. She did not, so I think Rachel Notley deserves a round of applause.”

Jean was not available for comment Wednesday, but his party issued a three-line statement from him.

“Last night during my town hall I made an inappropriate attempt at humour that I promptly apologized for,” said Jean.

“Jokes of this nature are never acceptable, and I hold myself to a higher standard. I have reached out to Premier Notley to sincerely apologize directly to her.”

Notley was not available for comment. But Stephanie McLean, minister of the status of women, spoke to reporters after a legislature event honouring Kish, who hails from Edmonton, and led the rugby team to a bronze medal at the Rio Games.

McLean said Jean’s comments were “totally unacceptable in this day and age … Regardless of whether it’s serious or a joke, it’s totally out of touch with what Albertans want to see from their leaders.”

When McLean was asked how she felt about having to filed questions on such a topic at an event dedicated to honouring women, Kish spoke up.

“For someone of that status to make a comment like that doesn’t go well with me and I’m sure it doesn’t with everybody else who is trying to achieve what we’re trying to achieve today, (which is) women being successful in a male-dominant world.”

Progressive Conservative member of the legislature Sandra Jansen said it was disturbing to her that Jean’s “thought process even went there.” She noted that in 2015-16, more than 12,000 Alberta women sought shelter from violence in their personal lives.

“This is not a place where you make jokes like that.”

Notley and other high-ranking women in her government have been the target of threats and vitriol online and elsewhere since the NDP took over in 2015.

Jean is currently in a political debate whether to merge the Wildrose with the Progressive Conservatives.

Calgary MP Jason Kenney is running for the leadership of the PCs on a platform to unite the two parties.

He has recently denounced violence imagery directed towards Notley and knows Jean from their days as fellow Conservatives on Parliament Hill.

“It sounds like he made a weird, tasteless and offensive effort at humour,” said Kenney, who added the remark doesn’t reflect the Brian Jean he knows, but does point to a larger problem in politics.

“What I find troubling about comments like this is that I don’t think they’d be made about a male politician,” said Kenney.

“Hopefully this is a wake-up call to everyone in politics to elevate the language and end the kind of rhetorical double standard that too often applies to women in politics, in general, and to Rachel Notley in particular.”