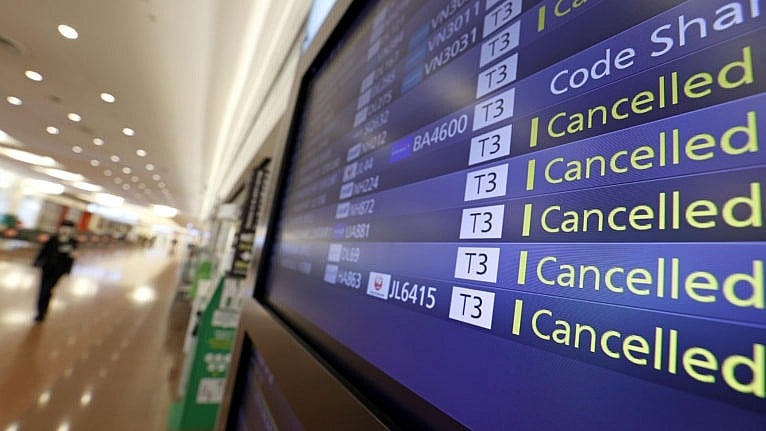 Flight cancelations are seen on the information board at Haneda Airport in Tokyo, Japan, Nov. 30, 2021. Japan confirmed on Tuesday its first case of the new Omicron coronavirus variant. (Shinji Kita/Kyodo News via AP)

More cases in Canada: Two people in Ontario and one in Quebec have been infected with the Omicron variant of COVID-19, CBC reports, in addition to the two Ottawa cases announced on Sunday. Patricia Treble, writing for Maclean’s, has a roundup of what we know now. Cases are being detected daily around the world, CNN reports.

High risk: The World Health Organization warned Monday that the variant poses a “high infection risk,” the BBC reports: “Omicron has an unprecedented number of spike mutations, some of which are concerning for their potential impact on the trajectory of the pandemic,” the WHO said.

Alarm bells: In the Globe, André Picard explains that it is too soon to know whether Omicron is more dangerous than earlier variants.

Despite its ominous moniker – Omicron, the 15th letter of the Greek alphabet, sounds like the name of a bad guy in a superhero movie – it’s not a given that the newest variant will be dramatically worse than previous ones, nor that it will displace Delta, the now-dominant variant. The reason Omicron has scientists worried is its “Frankenstein mix” of mutations. Viruses mutate, but usually do so fairly slowly. The new variant has set off alarm bells because it has 32 mutations on its spike protein alone. The spike protein is what coronaviruses use to enter human cells, so that raises fears (at least theoretically) that Omicron could spread more easily and circumvent immune protections, both those from infection and vaccination. But none of this is clear yet.

Reluctant Ontario: In the Star, Bruce Arthur argues that Doug Ford’s government should ponder the uncertainty and get more serious.

Israel moved hard on ventilation, contact tracing, boosters, and border restrictions, because Israel knows an emergency when it sees one. If Omicron is a real leap — and many virologists say its 25 to 30 mutations are at least hypothetically suited to potential immunity evasion, transmission and virulence — then the rules of the game will change. Some would likely stay the same, too. This government has set certain boundaries at this point which will influence the vulnerability to whatever Omicron or any other variant might be. It’s a broken record at this point, but this government has been truly reluctant to push vaccination from the premier on down. The result is about 1.4 million unvaccinated Ontarians over the age of 12, including some 350,000 over the age of 50. Every one is a walking alarm bell.

Why only Africa? The Globe has an opinion piece from U of T prof Ambarish Chandra, who argues that our travel restrictions are poorly thought out.

The speed with which the latest travel bans have been imposed on southern African countries suggests yet again that Canada is quick to impose harsh measures on the developing world but reluctant to do so with wealthy, Western countries. Multiple reports suggest that the Omicron variant was already present in Belgium and the Netherlands at the time these bans were imposed, but there is no discussion of extending measures to those countries.

Not vaccine apartheid: In the Post, Rupa Subramanya argues that vaccine hesitancy and logistical problems, not access to vaccines, are behind slow uptake in the global south.

There is no doubt that the purchasing power of rich countries makes it easier for them to procure vaccines, yet it is not true that poorer countries don’t have access to vaccines, as they can purchase them at concessional rates from the pharmaceutical companies, or draw from the World Health Organization’s COVAX facility. Rather than a lack of access, much of the disparity in vaccination rates in the developing world results from logistical problems and vaccine hesitancy, sometimes coupled with outright COVID-19 denial.

“As part of our efforts to restore relationships with those harmed, we will offer a public apology to all current and former members of the Defence Team who have been affected by sexual assault and sexual misconduct, including harassment, and discrimination, “ the release states.

A prop bike? Conservative MP Ed Fast accused Steven Guilbeault of using a bicycle as a prop during a session of hybrid Parliament on Monday, CTV reports.

Fast raised a point of order following question period, arguing that Minister Steven Guilbeault hung the bike behind him to “make a statement about his environmental cred.” “Mr. Speaker, the point is, there’s a rule that you cannot do indirectly what you cannot do directly. What the minister has done is blatantly use a prop because he’s now doing it from the safety of some other office,” Fast said.

Guilbeault responded on Twitter: “The bike has been there long before we started doing virtual Parliament. In fact, it has also been there for months as I was taking questions as heritage minister. Strange that after almost a year, it’s become an issue,” he said.

In a related story, the deputy speaker warned MPs appearing from home to keep their garb professional, CP reports, but he didn’t say anything about bikes.

Tech tax: The Liberal government intends to proceed with plans to implement a digital services tax targeting tech giants, the Post reports. Critics in the business community think the government should wait for an international agreement before acting.

Nomination survey: Some Conservatives think a membership survey is laying the groundwork so that Erin O’Toole can centralize the nomination process, the Hill Times reports.

Confront dissidents! Also in the Hill Times, former CPC MP Tom Lukiwski argues that O’Toole should call a leadership review so that he can silence internal critics.

Syrup to flow: The people behind Quebec’s strategic reserve of maple syrup said Monday they will release 50 million pounds of maple syrup–worth about $150 million–onto the market by February, responding to rising international demand, CP reports.